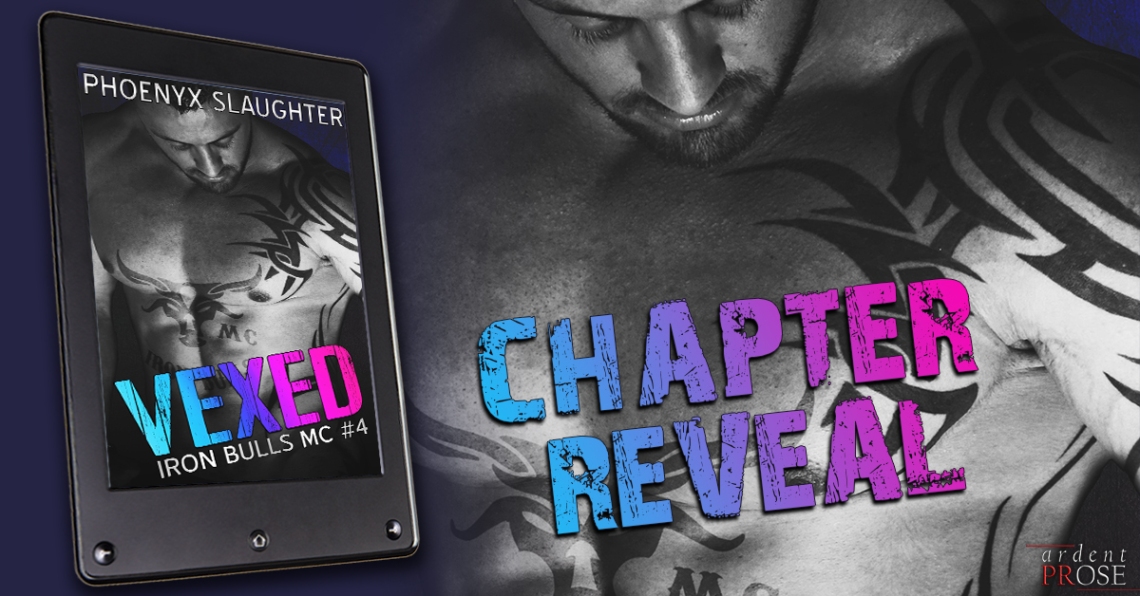 Falling in love will only leave you vexed.

Recent high school graduate, Athena Vale might seem bubbly and uncomplicated, but she has big plans and even bigger dreams, she’s only ever shared with her best friend, Karina. Athena’s strict upbringing has left her curious about taking a walk on the wild side—just once. And she knows exactly who she wants to go wild with.

President of the Iron Bulls MC, Reed “Romeo” Crownover has no shortage of women willing to entertain him. But these days, there’s only one girl on his mind —Athena. When she shows up at his clubhouse on the night of her eighteenth birthday, he decides it’s time to work her out of his system.

She’s half his age.

He doesn’t fit in her world.

She’s leaving for Los Angeles to start a new life in a few days.

Their connection was vexed from the start.

Vexed is the fourth novella in the Iron Bulls MC series. Although Romeo and Athena make brief appearances in the first three books, Vexed can be read as a stand-alone. It does not end on a cliffhanger.

HOW CAN I STILL BE fucked up over one little girl?

That sweet little bitch has had me acting stupid since the day her sassy ass showed up at my clubhouse.

It’s Dante’s fault. My Sergeant-at-Arms found himself a girl, Karina. Hot, smart, and down for about anything. Stare at her for longer than two seconds and you’re asking for an up close and painful introduction to Dante’s fists. My stone-faced-killer friend doesn’t fuck around when it comes to his girl. It’s her best friend I haven’t been able to stop thinking about.

Tagging along with Dante to the girls’ graduation yesterday didn’t help. That’s high school graduation, mind you. All I thought about was how today she’d be turning eighteen. Not even running into her uptight, upscale, bitch-faced parents had settled my dick down.

Like fuck do I plan to chase after her. Not my style. Besides, there’s enough willing girls trolling my clubhouse who’ve been legal longer than five seconds. Any one of them will be thrilled to service me, then go away. The way I prefer my relationships. Quick and uncomplicated.

Unfortunately, my dick isn’t interested in any of them. No matter how hard the girls have tried to get my attention tonight.

Spotting Dante and Karina walk in the front of door, I glance behind them. No Athena.

I’m capable of casually asking about her without sounding like a complete creep, right?

Then she stumbles in the door. With her scared little Goldilocks expression, she looks like she’s about to meet up with the biggest, baddest wolf.

Dante’s wearing his I need to choke someone face. Hooking my thumbs in my pockets, I approach the trio slowly.

“What’s up?” I ask Dante, who rolls his eyes at me. He’s not fooled one bit by my laid back act.

“Hi, Romeo,” Karina says shyly. I still can’t get over how a scary motherfucker like Dante managed to snag such a beautiful and soft-spoken chick. “Um, Athena and I spent the day with her family for her birthday, and she asked if she could join us tonight. I hope that’s okay.” I appreciate the emphasis Karina puts on the word birthday. What a nice, subtle hint that her friend’s now fair game.

“Is it your birthday, sweetheart?” I ask Athena. When I put all my attention on her, she blushes and glances at the floor. A much different reaction than I expected, considering how tough she usually acts.

Dante sighs and steps away from the girls. Karina leads her friend to the bar and I ain’t happy about not being able to say more than a few words to the girl who’s taken over my every wank fantasy for weeks now.

Taking me by the arm, Dante pulls me a few steps away. “Listen, I ain’t got no say over what you do with your dick, brother. But I feel responsible for her, being she’s Karina’s friend and all. Treat her with care, please.”

It’s a lot for my Sergeant-at-Arms to say. There aren’t many females he gives two fucks about. And I sure as fuck don’t remember the last time I heard please come out of his mouth. For once, I set my sarcasm aside. “Yeah. She’ll be okay with me. I won’t let her out of my sight.”

Dante searches my face and must finally decide I’m sincere, because he nods. We join the girls at the bar. Dante immediately pulls his girl to his side.

“Athena, we’ll be upstairs. You need anything, call your girl.” He tilts his head toward Karina, then drags her upstairs. Not that she protests.

Athena watches them leave, but I can’t take my eyes off her. She pushes her shoulders back and slowly swivels her bar stool toward me. “Am I finally allowed to have a tour of your clubhouse, Mr. President?” she asks in a low, husky voice I don’t expect from someone her age.

“Come here, you,” I say as I pull her closer. I spin her seat, so her back’s to the bar and she has to tip her head back to see my face. Staring down into her bold, steel-blue eyes unbalances me. “Did you have a good birthday?”

“Not really. I think you can make it better, though.”

I can make it better, or I can make it the biggest mistake of her young life. I shouldn’t mess around with this girl. She deserves a nice guy, who isn’t almost twice her age.

Except, I’ve wanted her from the second we met. And now there’s no reason I can’t have her.

All day I begged Karina to let me tag along to her boyfriend’s motorcycle club, but now that I’m here, I’m terrified.

The reality is so much scarier than all the things I’ve fantasized about since the first time I visited the Iron Bulls MC’s clubhouse.

A few weeks ago, I’d dropped Karina off to visit her boyfriend. I hadn’t expected the president of the club to take an interest me. The intensity of his deep blue eyes tied my tongue in knots and I made a fool of myself. That had been during the middle of the day. Things were relatively calm.

I give myself a shake, hoping to silent my parents’ ever-present criticism and focus. I swore if I had another chance to talk to Romeo, I wouldn’t embarrass myself. Yet here I am, gawking like a scared little girl.

This is the scene Romeo’s used to. The kind of behavior he expects. Sexy, confident girls. Not virgins who have no idea what they’re doing.

But my ex-boyfriend, Bobby, might as well have been an armadillo for all the similarity he has to Romeo.

The arrogance of having a road name like Romeo. Either he’s really good in the sack or has a micro penis.

God, I hope it’s not a micro penis.

The way he’s staring at me and running his hand over a chin full of scruff, I think I’m about to find out.

“Did you have a good birthday?” he asks while watching me as if I’m the only person in the room.

Because he wants to get in your panties, idiot.

He doesn’t even pretend he’s not checking me out. His deep sapphire eyes gleam with sex and mischief while they appreciate my long, bare legs, covered by a short, frilly skirt. I practically feel the weight of his gaze as it moves up my body, over my hips, and over the swells of my breasts, barely concealed by the flimsy fabric of my camisole.

“Not really. I think you can make it better, though.” Where the hell did I find the lady balls to say that?

Romeo likes my forwardness. A feral smile lights up his face. Hell help me, this man’s insanely hot. The beard scruff doesn’t hide the hard angles of his jaw. The fitted T-shirt he’s wearing under his leather vest hints at the rock-hard body underneath. Tattoos peek out from every available inch of skin. His thick, dark hair seems too wild to be contained and falls over his forehead in a way that declares badass. Every inch of him screams reckless, gruff, crude, dirty, dangerous, and utterly irresistible.

I’m so in over my head with this guy…this man.

And I can’t wait to see what happens next.

Phoenyx “Nyx” Slaughter has many roles, including writer, reader, and roughneck wrangler. She loves taboo stories—the filthier the better.

She loves to travel and meet new people with similar interests. Feel free to visit her on facebook or send her an email: NyxSlaughter@gmail.com