After the sudden death of her parents, Dixie believed the worst was behind her and she could move on with her life. She was wrong. When two military men arrive to inform her brother Charlie and been killed in action, her world once again turns on it’s axis. He had not only been her brother, but he had been her best friend, confidant, and sidekick. Their bond was unbreakable…except in death. A chasm in her heart was opened and she doesn’t think anything can fill it.

To help mend her broken heart, her therapist suggests Dixie volunteer to write letters to wounded veterans. She isn’t sure what to expect, but when she receives a random reply, things begin to change.

When Charlie’s best friend and wounded vet, Zane Carson, agreed to participate in a new program, he doesn’t think much of it, believing it best to keep his expectations low. Unbeknownst to him, he receives a letter from his best friend’s little sister…the sister he has always secretly longed for. Zane hid his feelings for Dixie, afraid of what Charlie would do or say if he found out.

A simple letter was the power to open the door to a million new opportunities. But will Zane let those opportunities to pass him by, or will be grab hold with both hands?

An adventure neither were prepared for.

This book is part of a series of books all set in the fictional town of Legacy Falls. Each one is a different story with different characters, but all of which are standalones.

Each had a chance to pick a charity to donate part of their proceeds to. 50% of the proceeds of my book will be donated to Operation: Homefront.

To keep up with all the other author’s books, please join the reader group! There’s so many amazing authors involved!

A Virginia girl since birth, J.L. Baldwin loves her small town atmosphere, but like many others, dreams of the big city…more specifically, New York City. Reading and writing was always an outlet when it came to avoiding being a social butterfly. She made the transition from reader to blogger to author in a matter of months. It took a lot of courage from an introvert like her to hit publish on her first book, Unbound Faith in December of 2015 and she is now working on more books to continue on in her debut saga and beyond.

THANK YOU SO MUCH!

Love has never been Cheryl Brigham’s plan. She’s not cut out for second dates, relationships, or happily ever afters.

All that changes when she’s on vacation in Paris. First dates lead to second dates, which leads to a whole lot more than she ever bargained for—but she knows it’s all over when she returns home. That’s okay with her.

When it’s no-strings-attached, what will Cheryl do when her heart gets tangled up?

Randi has spent her entire life writing in one form or another. In fact, if she wasn’t writing, she’d likely go completely and utterly insane. Her husband has learned to recognize when the voices are talking in her head and she needs some quality time with an empty Word file (the key to a successful marriage with a writer).

She lives with her husband, daughter, and four-legged children—all of which think they are people too.

A pop culture junkie, she has been known to have entire conversations in movie quotes and/or song lyrics.

Every brat needs a Daddy.

Daddy’s tastes are naughty and rough, finding the right girl has been tough.

Daddy’s had them all you see, but his little girl is the one he can’t set free.

Now Daddy has a lovely pet, a naughty toy that’s scared of every threat.

But brats are always hard to train, and Daddy’s girl has earned the cane.

Time to break out the whips and chains, get some blood pulsing through baby’s veins.

Isabella Starling started out as a voracious reader of dark romance, and has since evolved her love of reading into writing dark, twisted romantic tales. When not spending time with her boyfriend, two cats & a Labrador pup, she’s chatting away to author friends and plotting her next release.

Demi Donovan is a writer on a mission. A mission to bring bad boys, dark love and filthy dreams to every page she writes, that is.

A lifelong reader, writing is something she always wanted to do. The fact that she can write about all the dark, twisted things going through her head only makes it that much better.

Demi lives in a small town with big dogs, even bigger aspirations and a man who isn’t a bad boy, but definitely plenty filthy.

Opposites attract, in a tale of passionate desperation.

Eli Lapp has fallen deep into an inescapable abyss—his parents are dead, leaving him to care for his two young siblings and ailing grandfather, the Amish settlement where he lives has outcast him for being on the wrong side of a pregnancy scandal and he’s a hair’s breadth away from losing the very roof over his head.

Immediately at odds the pair struggle to connect beyond surface pleasantries; but where Eli may be uniquely equipped to help Arden gain a sense of humility, Arden just might be able to help Eli discover a long-buried truth about himself that’s been begging to be unearthed his entire life.

AUTHOR’S NOTE: This books contains mature language and explicit content, and is intended for audiences over 18 years of age.

This is the second book in the Bareback Cowboys series. We are taken into a community that has it own views. Eli has lost his parents and now is responsible for his two sisters and grandfather. When he Eli is made a offer for money to host Arden is take it. With all the drama of his friend Catherine and her pregnant and not saying who the father is. Eli and his family is now being shunned by the Amish community. When Arden arrives things sure do lightening up and the way they swirl around each other make a wonderful story. The characters take us on a road of the pain of staying by the ones we love no matter what. Recommend this book

>>> Amazon: myBook.to/Burned
>>> Everywhere else: https://www.books2read.com/u/3LJW54 Kyra Richards is being used…
As a weapon by a madman…
As a tool by the FBI…

But the real danger might be closer than she ever dreamed.

What readers are saying:
“I devoured it!”
“Kept me guessing…”
“Instantly sucked in…”
“A page-turner.”

Promises of Virtue
by Randi Perrin

We would be so appreciative if you could please share on social media.

☆☆ “WONDERFUL, SMOOTH STORYTELLING AT ITS BEST” ☆☆

Love has never been Cheryl Brigham’s plan. She’s not cut out for second dates, relationships, or happily ever afters.

All that changes when she’s on vacation in Paris. First dates lead to second dates, which leads to a whole lot more than she ever bargained for—but she knows it’s all over when she returns home. That’s okay with her.

When it’s no-strings-attached, what will Cheryl do when her heart gets tangled up?

TITLE: A Homecoming for Two Bears

While Killian and Finn loved the idea of being sent away to med school by their alpha, the idea of leaving their mate behind wasn’t ideal. Doubling up their course load whenever they could wasn’t getting them done fast enough. When Ronan shows up at their dorm one night, lustful and needing, they take what’s offered wholeheartedly.

After years of near misses, Ronan finally confronts Killian and Finn and demands their touch. Yet once it’s done, he struggles with his feelings. Hearing the words his vile fathers beat into his head doesn’t help, either. Unable to cope with what he’s done, he returns home to lick his wounds.

Torn between their duty to their alpha and their need for the mate they adore, Killian and Finn stay back to tie up their loose ends before they return home to build a life for them and their future family.

If they can convince Ronan to join them before their world explodes.

This is the 18th book in the Bear Mountain Series. I have fallen in love with each book and the characters. Ronan has been told over told by his father that they never submit. So Ronan is having a hard time with what has been thrown at him as a child to get close to his mates. Killian and Finn are away to get their medical degree. They are torn at why their mate Ronan keeps pushing them aside. When one crazy moment can the 3 let down their barriers and have the mating they are supposed to. Life is going crazy in the valley when they get the surprise of their lives. Can’t wait for the next project Zed to see if they find some needed answers. Highly recommend this book 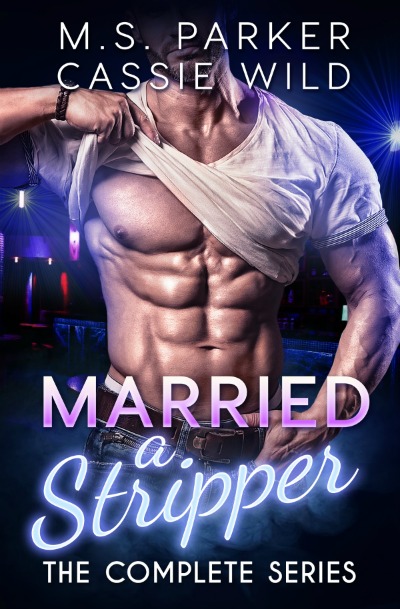 I should have known that going to Vegas with Astra would cause more problems than it solved, but I never imagined that her latest scheme would completely change my life.

Senator’s daughter, Piety Van Allen, wakes up in Las Vegas with no memory of the previous night’s escapes. Not only does she find a naked stranger in her bed, but when she learns that she’s now married to the handsome Australian stripper from Flames Down Under, panic erupts.

However, her best friend, Astra, comes up with a plan that could solve everything…or cause even more problems.

AMAZON US I AMAZON UK

Living in Las Vegas, she enjoys sitting by the pool with her laptop writing on her next spicy romance.

Growing up all she wanted to be was a dancer, actor or author. So far only the latter has come true but M. S. Parker hasn’t retired her dancing shoes just yet. She is still waiting for the call for her to appear on Dancing With The Stars.

When M. S. isn’t writing, she can usually be found reading- oops, scratch that! She is always writing.