Everyone knows the story where the beautiful girl gets taken by a monster. The one where the monster ends up being some poor tortured soul with a fucked up past. Love prevails, and then they live happily ever fucking after.

Well, this is my story, and it isn’t a fairytale.

I loved my monster too. But that was before he took me.

My reality is dark.

His demons are darker.

Mercy is NOT for the faint of heart.

Mercy has been banned on Amazon, Apple & Kobo, so is currently only available on Smashwords

I hated to admit it, but I was a sucker for a good psychopath. The sinister, mischievous smile always seemed to get me. It didn’t help that some of my own screws got knocked loose awhile ago.

But I was a good person once.

Being a good person ruined my life.

I waited too late in the day to go for my run, but sitting in the house had made me restless. The knife I had hidden underneath the bathroom sink kept whispering for me to take it out. If I didn’t leave, I’d end up playing in a puddle of my blood, getting higher than a kite.

So, there I was, jogging down the barren road, Lana Del Rey blasting through my earbuds. The sun was obscuring my vision, but even partially blinded I could see the dog in the middle of the street. And the car that was approaching, speeding up instead of slowing down.

My moral obligation had me sprinting to scoop the brown and white bundle into my arms. Tires screeched, I screamed, and the car swerved around me. If my bladder had been full, I would’ve pissed my pants.

I pulled the earphones out in time to hear a sleuth of expletives come from inside the large muscle car. The driver had stopped over on the side of the road; his once shiny vehicle now covered in dust. The smell of burnt rubber lingered in the humid air.

Casting a nervous glance back at the classic car, I assessed the dog in my arms and began walking up the street on shaky legs. Away from the angry driver.

The engine revved and tires spun. With a speed that had dust particles rising back into the air, the car zipped passed me just so the driver could cut me off. I had a vague idea of who the driver was.

“What the fuck are you doing?” A man opened the driver door and began to get out. My mind flashed with instant recognition. He had sunglasses on, and I could still feel his eyes burning holes into me.

“You were going to hit him.” I adjusted the small dog in my arms, feeling his wiry fur scratch against my bare skin.

“So you risked your life for a stupid animal?”

“Don’t call him stupid! If you had been driving like a normal person, instead of trying to go fast like a typical douche bag with a sports car, you would have seen him.”

“I wouldn’t have changed course,” he shrugged.

“Then you’re a douche bag and an asshole. Congratulations.” I glared at him and walked passed the trunk, feeling his eyes follow me.

“Morgana,” said a deep voice with an intoxicating amount of sultriness. The amusement in his tone now that he realized who I was irritated me.

“Fucking awesome,” I muttered, turning to face him. Of all people to come in contact with on a barren country road, I run into, Julian Andreou.

The sunglasses on his face may have prevented me from seeing his eyes. But they didn’t hide his prominent jawline, his slight stubble, or the dark eyebrow he had raised at me.

“I was distracted.” He gave me a smile that had deep dimples appearing on his cheeks. Like water on a flame, my immediate anger doused.

“No apology for almost killing me?” He towered above my height of five-four, leaving me no choice but to frown up at him. My reflection looked back at me in his Aviators. God, I looked a hot mess. Strands of baylage brunette hair had escaped my fishtail braid, and a tiny bit of perspiration coated my bronze skin.

He reached up and removed his sunglasses, allowing the full intensity of his gaze to meet mine. His green hues were smiling, causing my stomach to dip for an entirely different reason.

Julian was a gorgeous, immaculately groomed man, and I knew he was indubitably aware of his attractiveness. His ego didn’t need any more strokes, so I always chose to act indifferent. This, in my opinion, is what made him so ‘interested’ in me.

That weird thing people do where one pulls away, so the other follows. That’s what this had to be. He was a patient wolf who wore a suit, and I was the little lamb he wanted to devour.

“I was distracted by staring at you. Something I’ve been doing for close to a year now.” He enunciated each word slowly. As if I could ever forget someone like him, kept trying to ask me out.

He dragged his burning gaze up and down my body. Cognizant I was only wearing a sports bra and tiny yoga shorts; the dog became my shield against his ogling.

Shaking my head, I turned on my heel and continued walking. Seconds later, a door slammed shut, and he pulled off. I couldn’t hide my amused smile when his car pulled up beside me, moving forward at a snail’s pace.

“Get in the car, Morgan. I’ll take you home,” his smooth baritone voice softly called out to me.

The rumors about his family swirled around in my head. My cheeks heated in shame when I realized what I was doing. Judging him. Just like everyone in town did me.

It was a quaint town, which wasn’t necessarily a bad thing unless you were someone like me. A girl that had been smacked with a crazy label.

Riverview gossip spread faster than wildfires. They took a truth, twisted it, and ran wild with lies. When someone found out a tidbit of information about me, I was suddenly a weird recluse that belonged in a freak show.

“Come on, Morgana. I only want to take you home.” His words were saturated with double meaning. I glanced over expecting to see his cocky signature smirk, but all he gave me was a genial smile.

I shouldn’t have considered his offer, but I did. My house was a good thirty minutes away. Satan had lit Hellfires on earth; the heat was kicking my ass, and the dog in my arms felt like he’d been put in an oven.

“Okay,” I omitted, slanting my eyes down to the blacktop and walking around his car. The dog turned its head but didn’t do much else.

Julian climbed out and quickly came around to open the passenger door for me. Once I was settled into the cool leather seat, he went back to the driver side.

Something in my head was telling me this was a terrible idea. 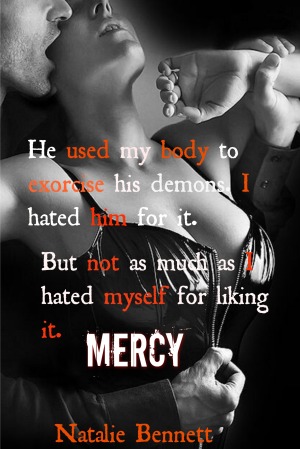 Natalie Bennett has always been an avid fan of all things dark and twisted, so it only made sense for her to write what she loves. She brings to life unapologetic antiheroes you love to hate and strong heroines who refuse to be broken.

Natalie writes Dark Paranormal & Dark Erotica with romantic elements. She doesn’t censor her writing and let’s her stories tell themselves. If you pick up one of her books expecting a typical HEA, you won’t find one. 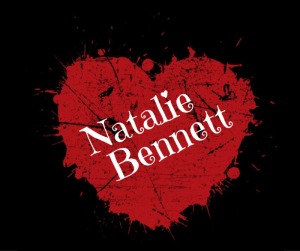