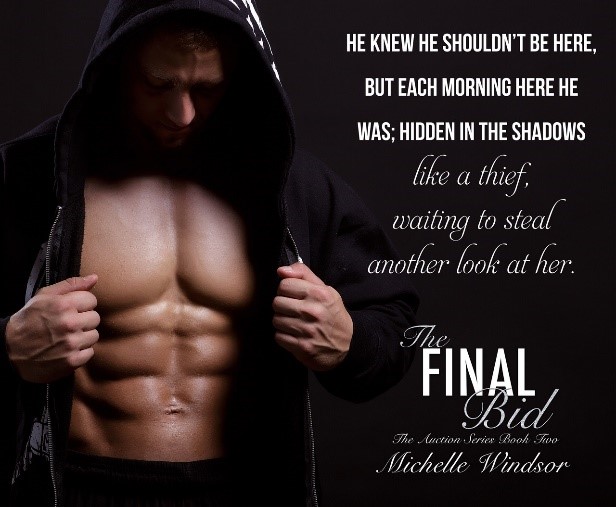 and made me hungry for more.  Michelle Windsor delivered in book 1,

but she knocked it out of the park with the conclusion of this duet.”

The Final Bid, Book Two and the conclusion of The Auction Series

It’s been two long months since Hannah walked away from Drew. It’s just as well, because her dreams—homeownership, her own business, and a comfortable life with her daughter—just don’t have room for a billionaire Dom . . . dreams that are haunted every night by memories of Drew’s touch, his kiss, and his insatiable hunger.

Tormented by his emotions and reeling from a shocking discovery, Drew is more determined than ever to uncover all of Hannah’s secrets. She doesn’t know it yet, but he’s been watching and waiting for just the right moment to confront her. This time, he’ll be the one in control, and he’ll finally know why she walked away from the most passionate weekend of his life.

The first time they met, Drew paid thousands for a weekend with Hannah. This time, he’ll bid his heart for a chance at forever.

The Final Bid is the second and final installment of The Auction Series.

Book One, The Winning Bid will be FREE April 7th – April 11th

It was day five, and Drew was done with just watching. He waited until Hannah started unlocking the metal casing before leaving the cover of the alley, making his way across the street toward her. His sneakers were silent on the pavement, making it easy for him to come up behind her with no warning. She had slid the metal casing up and had unlocked the front door and was pulling it open. He was two steps behind her as he slid through the open door, bells tinkling overhead, before it could close on him. Humming distractedly, she still hadn’t realized that he was behind her and in the shop with her. What she was humming stopped him cold. “Into The Mystic.” The song they had danced to at his beach house.

His voice was low and gruff. His palms were sweating and his pulse was in overdrive. She shrieked in surprise as she spun around, her eyes growing wide when they landed on him. “Holy shit, Drew! What the hell are you doing here?”

Her hand flew up to her chest as if to try and still her heart before her face darkened in anger.

“Are you trying to give me a god damn heart attack?”

He took a step closer to her, and then stopped when she took two steps back. He reached his hand up, pushing the hood of his sweatshirt down off his head as he raked his fingers through his hair. He brought his hands down near his waist, palms up, in an attempt to show her he meant her no harm.

“I’m sorry. I just— Jesus Hannah, I’d forgotten how beautiful you are.”

She stared at him, her features softening a bit as she let out a sigh.

“Drew, what are you doing here?”

She unwrapped the scarf from her neck and then unbuttoned her coat. She said nothing as she moved to hang them up in the closet.

“I’m not really sure there’s anything to say.”

His eyes followed her as she walked around and settled on the opposite side of the work table from him. “What do you mean there’s nothing to say? I saw you with your daughter. And your husband. Is he your ex-husband? You said you weren’t married, but are you? I haven’t seen him here with you since that day.”

Hannah’s eyes narrowed. “What do you mean you haven’t seen him here? Have you been watching me?”

He took a deep breath as he realized his mistake. Damn, might as well keep going.

“I’m just trying to understand who you are and what the hell happened between us. Because I know for certain it wasn’t like anything I’d experienced before.”

He took a couple steps around the table to get closer to her, but she countered his action, keeping the space between them.

“Do you think about me at all?” He looked at her blank expression and shook his head in frustration before continuing. “Because I can’t stop thinking of you. It’s been over two months, and I can’t get you out of my system. And believe me, I’ve tried.”

She looked at him, one eyebrow raised, distaste evident in her tone. “Girls at Baton Timide helping out with that?”

He scoffed loudly before answering. “Try tequila. Lots and lots of it.”

He locked his eyes angrily on hers and slowly made his way around the table toward her.

“You think another woman is the answer to my problem? You think if I go to the club and buy myself someone new, and tie them up, and fuck them that I’ll forget the way you felt?”

“That I’ll forget how you smell, how you taste?”

Drew had reached her now and grasped her lightly by the shoulders as he bent down to whisper in her ear. “That I’ll forget how you screamed my name as I drove myself into you?”

Her breathing quickened as he bent closer and ran his nose from her ear into the soft tresses of her hair, inhaling her scent. He was about to pull away when she turned her head and brushed her lips lightly across his. Before he could stop himself, he put one hand on her cheek and crushed his lips against hers, sliding his tongue across her lips, forcing her to open up to him. She hesitated for only a second before her mouth parted on a moan, her tongue meeting his, her hands reaching around to clench the back of his sweatshirt.

Michelle Windsor, author of The Auction Series, is a wife, mom, clinical analyst, and a writer who lives North of Boston with her family.  When she isn’t working or writing, she’s been known to partake in good wine and good food with her family and friends.  She’s a voracious reader, enjoys a good movie and may be slightly obsessed with The Walking Dead.

She loves to interact with her readers.  You can find her online most days on any of these sites: