Getting kidnapped by a motorcycle club? I should be so lucky… My boyfriend is cheating on me. My job is killing me. My commute sucks. So when Harlan Masters kidnaps me and holds me hostage one morning, my reaction is…WOOHOO!Seriously, now I’m the center of attention!Lil’ Princess waited on hand and foot by big, bad, bikers. They give me everything I want…I mean, literally, everything I want. Yes, even that. It’s amazing. No job. No bills. No responsibilities. A girl could get used to this. The Black Fist MC thinks they’re tough?Wait till they go up against the power of pink. We’ll see who’s left standing.*** It’s the cute single girl versus the Big Bad Biker in this installment from Mona Cox. Guaranteed to be sweet, sassy, and fun. No cheating or cliffhangers. Happy Ending? Always, babe *** 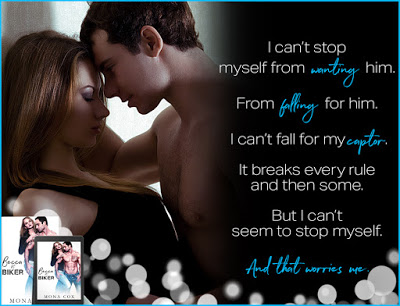 Mona Cox is the pen name that Alexis Angel uses to write steamy contemporary romance when she is co-writing with other authors.   Mona represents the bygone times of all of us. When we were independent, carefree, and the world was still new and waiting to be explored. When we didn’t have bills and responsibilities and the biggest thing on our minds was finding that perfect dress to wear on the date with the perfect guy and how long we wanted to wait till we let him take it off.   Whenever possible, Alexis seeks to co-write with others as she seeks to learn and grow as an author.   Mona releases weekly and to keep track of who she is working with which week, sign up to her Mona’s Moaners newsletter at http://eepurl.com/cBaG5D or email her at mona@naughtyangelpublishing.com.

by Nic Starr
https://www.amazon.com/gp/product/B06XSSNXHJ
Dr Nathan Powell is ready to settle down near his family, and hopefully find the man of his dreams. He returns to the small coastal town where he grew up, but while life is simpler than it was in the city, there are also complications—like patients’ reactions to an openly gay doctor. And like running into Nate’s first love, Damien, an out-and-proud local business owner who is unwilling to be any man’s dirty secret. The reunion reignites old desire even while it stirs up Nate’s guilt over the way things ended with Damien.

When Nate’s nephew runs away, Damien accompanies Nate on his mission to find the young man. The drive to Sydney, and the search of the city, gives Nate time to reconnect with Damien—and to wonder if he made the right decision years ago—when he determined a future for them was impossible. Is a fresh start realistic for two men in their forties? But before he can ponder the second chance they’ve been given, Nate must locate his nephew.

World of Love: Stories of romance that span every corner of the globe.

Viggo Sjoberg has been openly bisexual since he was 17, but always assumed he would settle down with a woman. When he’s surprised with news he has a child from a past fling, he jumps headfirst into marriage and fatherhood, but his new wife isn’t what she appeared to be. Adding to Viggo’s confusion are the feelings aroused by his seemingly straight roommate, Jamie.

When Jamie moves thousands of miles away, Viggo tells himself it’s over. Until a life-changing event puts the two men on a collision course. Suddenly, Jamie needs Viggo—badly—and Viggo is prepared to do whatever it takes to help. Even if it means he has to give up everything he always thought he wanted.

THIS BOOK IS A STANDALONE.

Kat’s a typical PTA mom with a wonderful and supportive husband (Kevin) and two amazing boys (Nick and Max). When she’s not writing, she’s either scrapbooking or indulging in her second love (after writing) – traveling. Greece is one of her favorite places in the world. She loves that Athens is a big city with a small-town feel. The food, beaches and culture keep her going back as often as possible. She hopes to retire there one day so she can spend her days writing books on the beach.

Kat has been a working freelance writer for nearly 30 years. She sold her first article–a review of a rock concert–for $10 in 1985. Since then she’s been an entertainment journalist, waitress, bartender, legal assistant, food critic, magazine editor, substitute teacher, and sports writer. She also spent some time working at A & M Records in Los Angeles.

As you can guess from her series, the Las Vegas Sidewinders, Kat loves hockey. She is also a freelance hockey writer, covering her favorite team, the Florida Panthers, and any other teams that have an interesting story. The rest of the time, she writes novels: sexy, romantic fiction that she hopes makes you as happy as it makes her. There’s something enticing about hockey players and romance…

by Silvia Violet
https://www.amazon.com/Well-Tailored-Thorne-Dash-Companion-Story-ebook/dp/B06Y6H49HY
*This book is a companion story to the Thorne and Dash series, but it can also be read as a stand-alone.*

Marc longs for a grand romance, but he doubts he’ll ever be that lucky. Then he meets Darius, an arrogant tailor who pushes all his buttons. When Darius offers him a job, Marc hesitates—he needs a direction for the future, not another man who doesn’t believe in relationships.

Darius lives by a few unbreakable rules: never sleep with employees, fashion should be simple, and romance is for fools. Marc, with his shimmery sweater collection, makes him want to break every single one.

They quickly give in to desire, but Darius wants to protect himself and Marc refuses to repeat past mistakes. It’s only when they let go of assumptions, that love has a chance to take hold.