Yield A Sequel to Forged in Trust Bay Area Professionals #5 A promising encounter takes a dark turn. Captain Sami Soros and Father Jay Blackstone cross paths at a major European hub. When systems shut down due to a cyber-attack, flights are delayed and the resulting chaos is unprecedented. After having served three tours in Afghanistan, recently discharged Sami struggles with his new civilian status. Emotionally depleted, and dangerously edgy, he views most of his fellowmen with utter contempt. Jay is returning to his parish in San Francisco after a month-long retreat meant to shore up a crumbling vocation. All vestiges of spirituality melt away when he sets eyes on Sami. They begin a clandestine affair fueled by a shared addiction to extreme forms of BDSM. Their relationship goes off the rails, and Jay reaches out to Rino Duran, a former seminarian. With the help of Dr. Ethan Marshall, Rino’s full-time Dom, the established couple attempt to separate truth from lies to give Jay and Sami a shot at happiness. This novel can be read as a standalone. 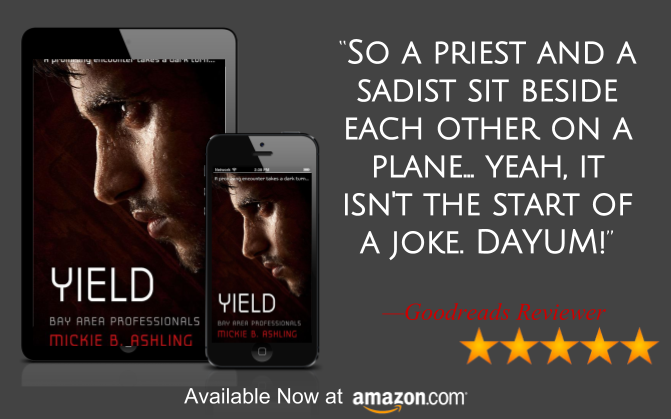 Mickie B. Ashling is the pseudonym of a multifaceted woman who is a product of her upbringing in multiple cultures, having lived in Japan, the Philippines, Spain, and the Middle East. Fluent in three languages, she’s a citizen of the world and an interesting mixture of East and West. A little bit of this and a lot of that have brought a unique touch to her literary voice she could never learn from textbooks. By the time Mickie discovered her talent for writing, real life got in the way, and the business of raising four sons took priority. With the advent of e-publishing—and the inevitable emptying nest—dreams of becoming a published writer were resurrected and she’s never looked back. She stumbled into the world of men who love men in 2002 and continues to draw inspiration from their ongoing struggle to find equality and happiness in this oftentimes skewed and intolerant world. Her award-winning novels have been called “gut wrenching, daring, and thought provoking.” She admits to being an angst queen and making her men work damn hard for their happy endings. Mickie currently resides in a suburb outside Chicago.