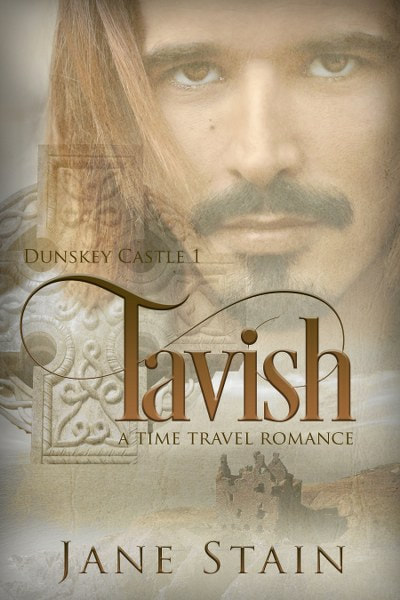 Tavish was the best boyfriend Kelsey ever had, but seven years ago he disappeared from her life. She coped with her heartbreak by finishing her doctorate in Celtic Artifacts, and now her career is taking off. But Tavish is back, acting like a stranger who knows more about Celtic artifacts than she does. He’s been on staff at every one of her job sites in Scotland, wearing that stupid sexy kilt.
Goodreads * Amazon 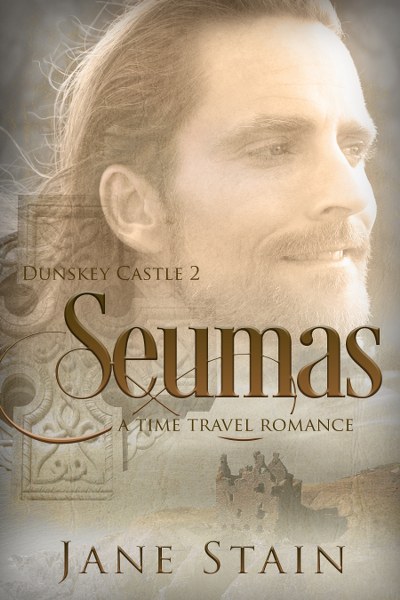 Sasha just got her dream job in the highlands of Scotland. Where her friends ply her with celebratory champagne, throw a plaid cloak over her business suit, and take her to the 14th century to do original research on the dig site. She meets gorgeous highlander Seumas (“Shaymus”) there, and — wait, is this a good idea?
Goodreads * Amazon 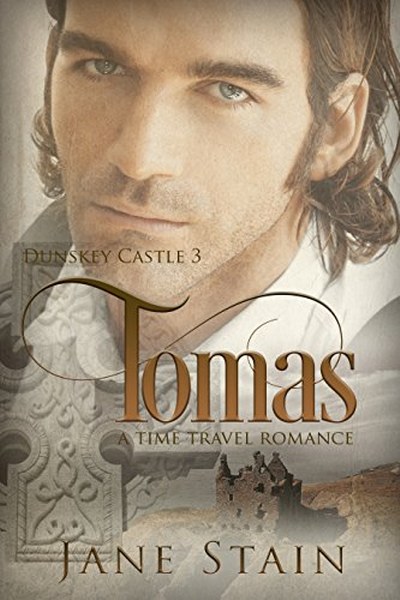 Tomas was on top of the world. He had a hot girlfriend. She knew about time travel, so he didn’t have to keep secrets around her. So why did the sight of his old friends Amber and Kelsey make him uncomfortable? His girlfriend kept telling him to forget about them. But he couldn’t. He wished he knew why.
Goodreads * Amazon 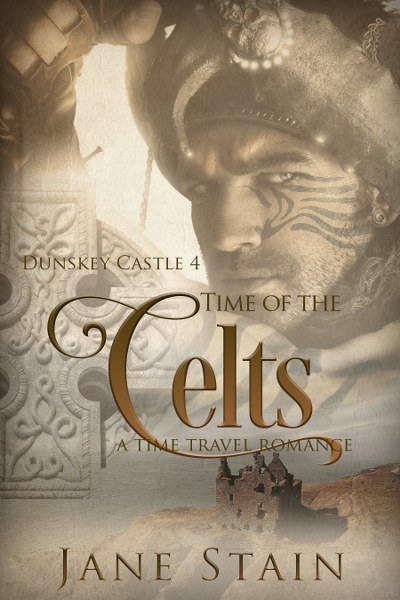 Jaelle dons a Roman helmet left among her ex’s things and is transferred to the Pictish Celt side of Hadrian’s wall — flat on the ground and tripped over by Breth. The naked woad-painted warrior is being chased by Romans who caught him scouting their fort. She earns his trust by grabbing an injured Roman’s sword, fighting beside Breth, and saving his life. He takes her to his clan, where she sees druids in their sacred grove imparting magical protection by painting the warriors’ nudity with muscle-activated woad pictures.
Goodreads * Amazon 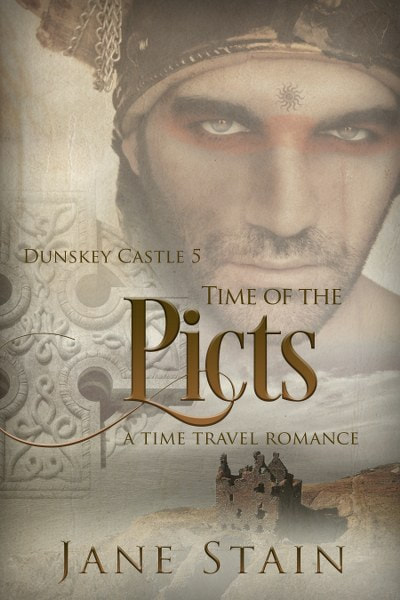 Ignoring phone calls from Kelsey, Jaelle thinks her first time travel adventure was a dream, but a new museum display shows a stick figure she remembers drawing with her fingernail file on the top stone of Hadrian’s Wall. Whoa, that means her time travel and meeting of the dazzling warrior Breth and their fight with the barbarians at the Roman fort really took place! She needs to get back to Breth!
Goodreads * Amazon 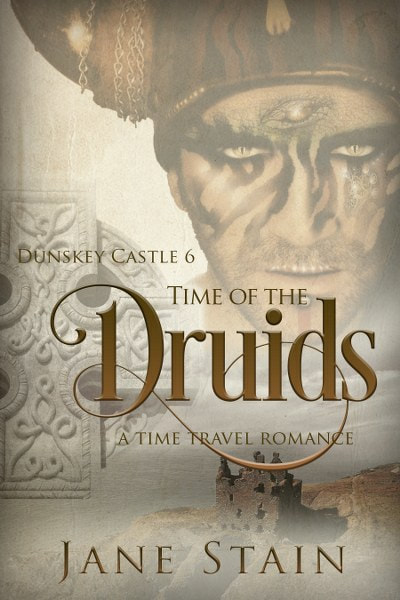 Deirdre’s first time travel assignment was challenging. Sure, she had her magic dagger, but he wasn’t cooperating.
Talorac felt anxious about this meeting. A summons to the sacred grove had always meant the druids would perform their woad magic to prepare him for battle. So he was in no way prepared to make the acquaintance of the woman he found there with them. Deirdre was beautiful, and a warrior, and from the way she was flitting around the grove, she was the most powerful druid he had ever heard of in his life.
Goodreads * Amazon 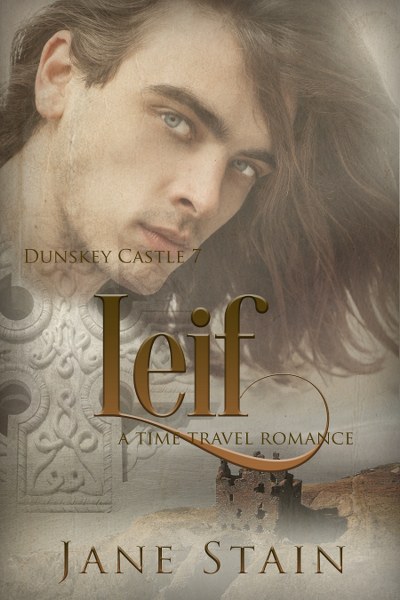 Jessica’s friend tricks her into time traveling to 15th century Scotland. A gorgeous highlander Jessica is sure is out of her league invites them to stay at his manor house.
Leif knows he should keep his mind on training the militia for the battle that is sure to come soon. And after all, Jessica is just passing through his town. But she is so compassionate he feels his heart melting.
Goodreads * Amazon 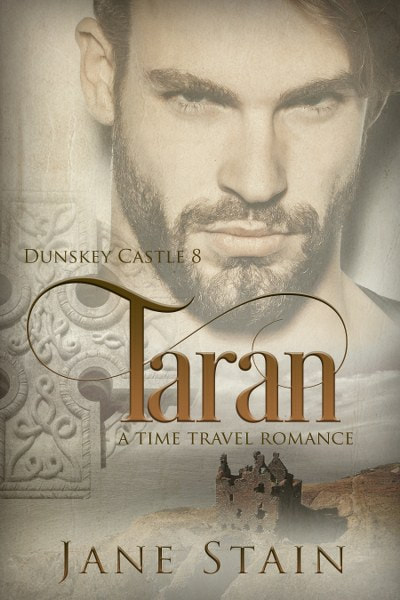 Lauren has a magic dagger that gives her orders and sometimes stifles her speech. It wants her to find some artifact here in 1400s Scotland and give it to some druid friends.
She wants to get to know Taran.
But the dagger whispers that Taran is in the way.
Taran’s life in a small town in Scotland was disrupted six months ago with the arrival of Lauren and the other two lasses. Lauren knew the way mechanical things worked in a way most astonishing. He never tired of hearing her explain. But to find out she has a magick dagger that she is in danger of losing her self control to? That shocks him.
Goodreads * Amazon 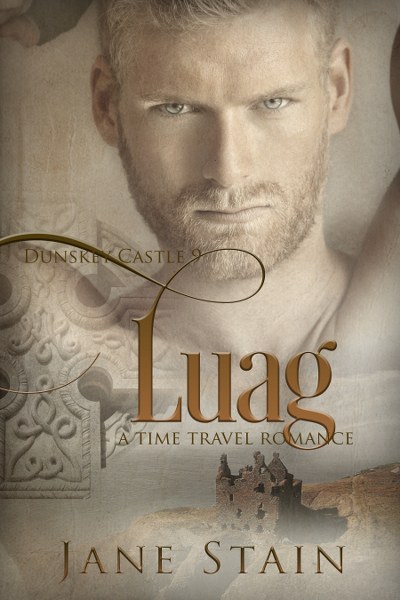 Luag and Katherine are two bullheaded people trying to “out stubborn” each other. They’ve been verbally sparring in Medieval Scotland for the past year. He’s never met a headstrong woman before, and he is such a stubborn male! When chance throws them forward to Katherine’s time, he is the fish out of water. Understanding blooms, as does love.
Goodreads * Amazon 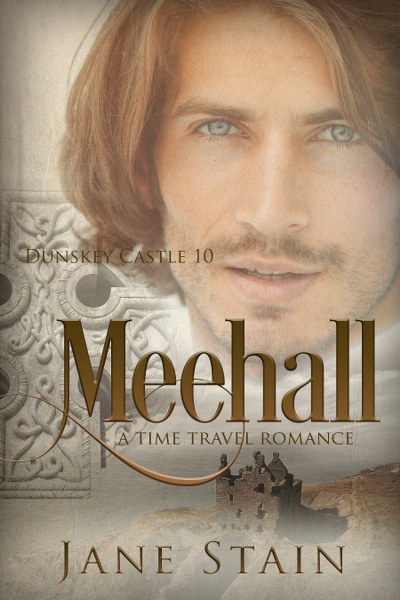 Sarah’s boss at Celtic University plonks an iron bracer on her desk. It brings up one of Kelsey’s magic druid dreams. In it, Sarah’s ex, Michael (Meehall in Gaelic), used this bracer as a time travel object. And was a kilted highlander in 1700s Scotland.
At lunch, Sarah’s friends say they’re calling in sick tomorrow to attend a local fair. They want her to call in sick too.
Sarah isn’t keen on giving the bracer back. She wants revenge on Meehall for breaking up with her and decides to use the bracer to have a bit of fun.
She tells her friends they don’t have to call in sick. She’s taking them back in time.
“Good one!” they tell her, laughing.
Goodreads * Amazon 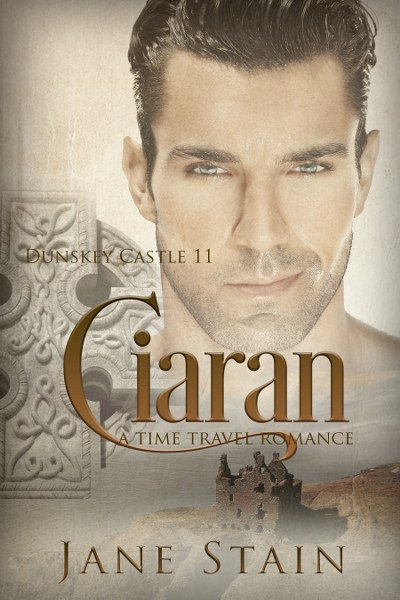 Ciaran arrives in the 21st Century with Eoin (John) in the darkness of the Celtic University night. Ciaran is delighted to run into Nadia and wants to stay and visit, but Eoin drags him away from her. Eoin is extra grumpy, saying the Murrays need an edge because the Cameron Clan is planning something big. Eoin sneaks the two of them into a storage basement and seems inordinately glad to find a particular halberd there.
Nadia remembers the kilted warrior Ciaran from her experience in 1706 Scotland and secretly has a crush on him. Wherever he and Eoin are going, she bets it will inspire her story for Celtic University’s historical society paper, especially if they are time traveling. She sneaks into the back of the cart Ciaran and Eoin are driving and hides under a blanket.
Goodreads * Amazon 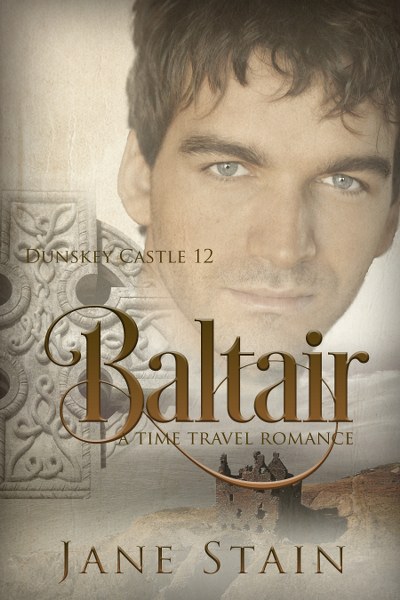 Ellie was captured during her last time travel adventure. But her friend’s husband’s life hangs in the balance. And this ring she found is giving her courage. Probably too much courage for a modern woman in 1706 to have.
Baltair is glad to see Ellie again. Her friend married his cousin and stayed, when Ellie went back to their time. But he keeps his distance. Many will die in the upcoming battle, maybe including him.
Goodreads * Amazon 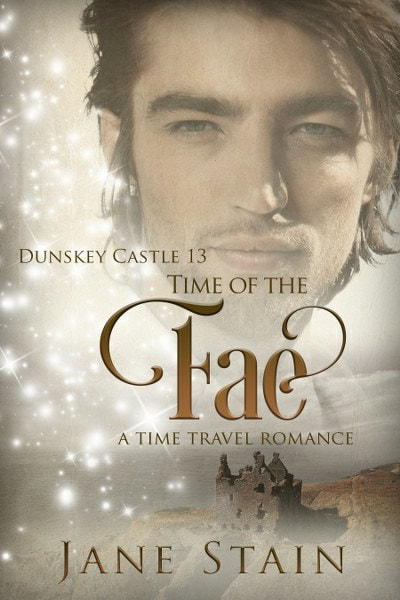 Suellen and her friends ride a whirlwind onto a seacliff and panic. What happened?
The area is crawling with Highlanders who say they’re fighting the Romans.
That guy. The one they met at the Renaissance faire.
They need to find him.
Goodreads * Amazon 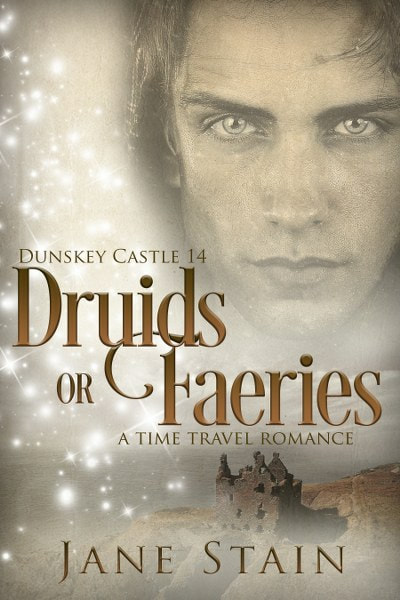 Marybeth frowned. “Dinna ye think it wrong, tae grab the faerie axe by force?”
Ashley batted the air as if what Marybeth had said was dismissible. “The faeries gave it tae Ciaran, who gave it tae John. Kelsey stole it from John. ‘Tis na wrong for John tae steal it back from her.”
Connell stuck his chest out and his chin up in a show of bravado. “Kelsey’s gotten full o’ herself, syne she went off tae Celtic University. That, or she has been brainwashed by all those Druids. We used tae be friends, but now she’s gone tae far. We wull be taking that axe back from her sae we can save Donnan. End o’ discussion.”
Goodreads * Amazon 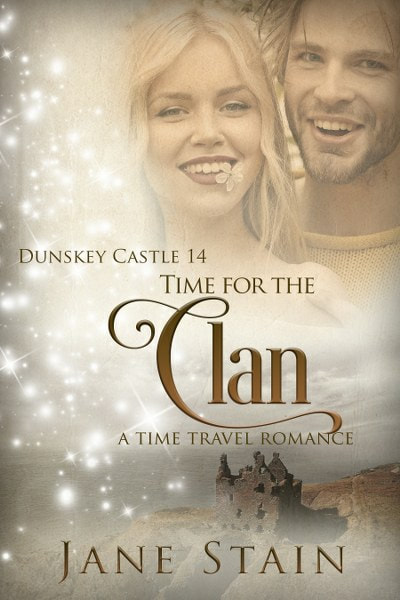 Ashley worries the faeries are about to kill her. She has to escape and warn Connell. His Highland clan could be separated by time forever. Can they make the druid curse help them?
Goodreads * Amazon 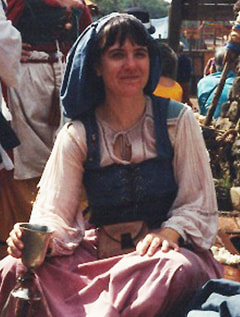 Jane worked at the Renaissance Pleasure Faires at Paramount Ranch Agoura, Devore, and Black Point Forest from 1987 to 1993. She started as a peasant, then auditioned and made it into the Washerwomen, and then was a sea dog. She also hawked for Belle Star’s perfume wagon and The Dye Spot clothing booth. Jane Stain is a pen name.
She is in her fifties and has been influenced by the writing of Diana Gabaldon, Isaac Asimov, Anne McCaffrey, Harry Harrison, Jane Auel, Ray Bradbury, Ursula K LeGuin, Robert Jordan, Stephenie Meyer, Terry Goodkind, and many more great authors.
Website * Facebook * Twitter * Bookbub * Amazon * Goodreads 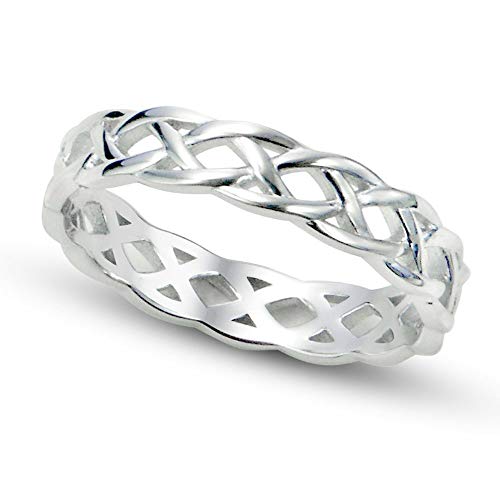