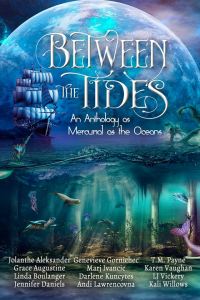 When you stand beside the water, listening to the waves, what is it you feel?
Calm? Rage? Hope? Despair?
Love?
The sea is a place where every emotion can be felt, every crash of the waves upon the shore a match to the beating of your own heart, no matter what is going on inside it.

“Between the Tides” is just that. A beating heart that rushes at you from the shoreline, and dares you deeper into the waves. Do the depths of the ocean offer a sweet respite from the world around you? Or are the snow fed lakes in the mountains that place where you can go to create an ice wall around your heart, or perhaps break it asunder?

Come with us where the creatures of the deeps and the shallows, creatures out of myth and legend, come to life and drag you into the waves.
Who knows, you might get lost on a pirate ship or carried away by a kracken…
The only way to navigate the shores is to travel:
Between the Tides

Jolanthe is a Marine Corps Brat and proud of it.
The nomadic life of the military helped develop her love of reading and books became her friend.


A dancer, Jolanthe appeared in several productions in


high school and later in the area theatres. She gave up her role of dancer/actress


for her greatest role to date, that of Mother to a son who reminds her every day to find joy


in the simplest of things and to use her imagination. Missing the stage, and at the prompting


of some on-line friends, Jolanthe gave rp-ing with an internet group a try. There she found and developed her skill as a writer.


When not working, writing, or keeping up with her son, Jolanthe can be found scouring antique shops, used bookstores, and of course, reading.

Editor and award winning novelist, Grace Augustine, grew up in Montana.
Her work career has taken her from title and abstracting to administrative
assistant church work to co-owning a small town weekly newspaper to
her current profession as a floral designer/jewelry designer/writer.

Linda Boulanger has always been a hopeless romantic, which spills over
into her eclectic mix of published books, numerous story singles, and
short stories in a few group anthologies. She spends her “free time”
designing book covers for others through Tell~Tale Book Covers and
TreasureLine Designs, all from her desk just north of Tulsa, Oklahoma.

Hello! I’m Jennifer Daniels, I live in Upstate NY with my husband, son and our dog Kera!
I’m a nurse by trade but, my arthritis does not allow to do my nursing anymore.
My arthritis is called Ankylosing Spondylitis, it is a autoimmune disease with no cure.
Anyways, one day I just started to write and then
I went to the Writer’s on the River book signing. It was absolutely amazing and inspiring.
So, a year later my debut book Opalla was released.
My little family loves to be outdoors fishing, camping and going to the lake.

Marj grew up in northeast Ohio, on the shores of beautiful Lake Erie.
From an early age, she was an avid reader, losing herself in the stories
of people from days long gone by. Her love of the past lead her to earn a degree in History,
and has kept writing at the forefront of her life. Her own stories range from
historical romance to the paranormal. Married to her soulmate
and raising a feline furball, she currently lives one town over
from the one in which she was born and raised.
“The Shadow and The Sugar Bean” is her debut novel.

Darlene Kuncytes is the best-selling author of The Supernatural Desire series.
She was born and raised in Ohio, and still happily resides there.
She’s a complete smart ass with a wicked sense of humor who has been
told on more than one occasion that she is irritatingly chipper in the mornings.
And, honestly-she really couldn’t care less! She is the eternal optimist,
and you can usually find her with a coffee mug in hand and a smile on her face ~
causing all kinds of trouble.

Andi Lawrencovna lives in a small town in Northeast Ohio where she was born and raised.
She writes Fantasy with a twist, un-Happily-Ever-After-ing as many fairy tales as she can.
And she’s not averse to looking at the odd nursery rhyme or ten when the mood strikes.
Her Never Lands series is currently enamored with an ash covered assassin and
a prince who’s not in the highest of towers. From ogres spouting poetry,
to princesses toting swords, Andi’s stories aren’t quite like you remember.

T.M. Payne is a mom to grown children, and she has six beautiful grandchildren whom she adores.She was born in Alexandria, Virginia and has never lived too far from the area.She has always enjoyed reading from an early age and began her journey into book blogging four years ago, and has never looked back. Reading is her relaxation, and she loves helping others find a good book. Lending a hand with promotions is just another bonus, and she is always happy to help authors.She never aspired to be an author herself but felt strongly enough on certain things in life that she decided to write a short story featuring her love of paranormal, along with a great issue facing our world. She truly believes every single breathing person should be able to live their life with whom they want, how they want, and not be bullied because of their choices in life.Hence: Secrets…

Karen Vaughan lives in Peterborough, Ontario with her husband Jim and a cat named JJ who has plenty of catitude! Karen started her literary journey in 2005 when she was home on sick leave and was tired of staring at the four walls or twiddling her thumbs. An idea for what would become DEAD ON ARRIVAL popped in to her head and the feisty 30 something character Laura wouldn’t leave her alone til her story was written. Laura took a break from pestering the poor author so she could write a free standing novel DEAD COMIC STANDING. Soon Laura was on the campaign to get Karen back to what would become the Laura and Gerry series. It now has 7 books, the latest being DEAD TO WRITES. Karen is the proud mom of one, step-mom of 4 grown kids, and 2 grand children. While not writing her fingers to the bone she hosts WRITERS ROUND TABLE , an online radio show the second Tuesday of each month. She is also a partner with Viv Drewa in OWL & PUSSYCAT PROMOTIONS. promoting independent authors. Karen is also a stand up comedian who does her routine for local talent nights. She also loves reading, crafts and drawing.

LJ Vickery began writing when the muses in her antique farmhouse refused to let her sleep. She found great joy and success in creating historical fiction, but then the gods in her Immortal series demanded to be heard. Heeding their pleas, she gave each of them a voice, a safe haven in the Blue Hills of Massachusetts, and of course, true love. Hot, hard bodied Mesopotamian gods and a contemporary United States make for a potent mix, and LJ hopes you enjoy reading the Immortal’s stories as much as she has writing them.When LJ’s not scribbling away, she’s practicing Chinese medicine, keeping books for a contracting firm, and growing organic vegetables.She lives in a charming, seacoast town south of Boston with her husband, two children, a dog, two cats, and one intrepid fish…who refuses to let the fish-tank be retired.

Born and raised in Toronto, Kali now resides in the exquisite eastern Ontario countryside where she enjoys the serenity of nature. When she isn’t busy being the married mother of two, or a Public Relations & Communications Specialist & Event Manager, she shadows worlds of paranormal passion & intrigue.Kali strives to create emotional, compelling stories and characters you can’t help but love, hate and cheer for. Captivated by her love of dragons, gargoyles and everything paranormal, she pens these delightful creatures into epic tales of romance and adventure and often infuses her passions of martial arts, music and ironic twists even she didn’t foresee.A good cup of tea with the crackling fire gets her creative juices flowing in the wee hours of the night, when the house is quiet and she can type away to her heart’s desire.

Visit and like our page for great things ahead !!!
https://www.facebook.com/authors2019/