Faith only wanted to be taken seriously… She never meant for things to get so out of hand, but men get funny ideas when a woman wears trousers.
Miss Faith Bagginton and her twin sister, Hope, are the youngest of the Bagginton siblings. The family has high expectations for the twins’ entrance into society and their future marriages, but Faith Bagginton doesn’t want to be only half of a matched set, and marriage is the furthest thing from her mind.
Faith longs to be taken seriously as an author and a playwright. With the invention of the pseudonym, Mr. Emerson, and a letter to a London printer it seems her dream is at hand, but a mix-up will have Faith donning a masculine visage in more than just name.
Hijinks ensue when Faith, disguised as Mr. Emerson, secretly attends the Baron’s Ball. Complications threaten Faith’s scheme, Hope must take her twin’s place, and if anyone should find out both girls would be ruined!
To make matters worse Faith is falling in love with the handsome Oscar Titherington, a well know rake and troublemaker, who has taken a liking to the young playwright, and has no idea Emerson is really Faith.
As if that were not enough, the twins’ eldest brother Isaac returns from London ahead of schedule and has no idea what his sisters have been up too. The twins are used to playacting each other, but Faith discovers that dealing with society and twisted love triangles can get bit tricky when you are a gentleman who is really a lady.
A riotous regency romp about a dramatic, adventure seeking, bluestocking girl who finds herself at the center of a not-so-average love triangle. 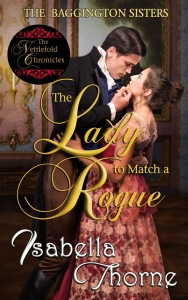 Faith herself sighed at her own imaginings. She began to write again.The Prince was a regal but unkind man…“Behind!” a voice shouted the word with such an urgency that had at last caught Faith’s attention. She leapt to the side where she landed with an undignified flop in a nearby bush.She expected at least a phaeton or carriage that could not give way to a lone walker but, no, it was nothing more than a beast of a rider racing past at a breakneck pace. A milder lady might have gasped aloud and offered a cry for help, but Faith was far too reactive for such gentle femininity. She shouted out in anger that the rider ought to watch where he was going and then she realized that she had dropped her journal in the mud, and her reticule was also thrown aside. Frantic, she reached for the bag, concerned that the neat and careful pages had received some harm. The rider pulled his horse to an abrupt stop, and Faith thought what a thoughtless fellow he was to pull so on the horse’s mouth when indeed he should have had control of the animal from the outset. He turned the horse back towards where she had begun to scramble from her entrapment.“Blast and botheration,” she muttered as she attempted to free herself from the brambles along the roadside. She managed to retrieve the reticule and clutched it close. The fabric of the bag was dirty, but the manuscript inside seemed intact. She brushed the dirt from the bag.“I do apologize,” the gentleman said with surprising sincerity for the pace at which he had blown past on the first. “I have not seen a single living creature upon this lane for three days’ past, and I little expected to come upon a lady on foot when I crested the hill.”It was clear from his expression that he expected a good scolding. Perhaps he was accustomed to such things, what with his wayward behavior. Faith was not one to leave him wanting.“What sort of plague about the neighborhood are you?” she asked in a huff. “Are you not aware that this is a private lane? You have no business here, sir.”The gentleman dismounted from his steed and bent to pick up the notebook which had flung itself open in a flurry of pages.“Don’t you dare!” she cried thinking of the rough draft contained within. “Leave that be!” All the while Faith was struggling to extricate herself from the branches. The grasping fingers entwined themselves into the many folds of her cloak and her gown. She could even feel one such branch that had dug its tendrils into what had once been an elegant twist of hair at the base of her neck.“Allow me to assist you.” The man offered with one hand outstretched. Faith eyed the offering warily and gave one more futile attempt to disentangle herself with any semblance of grace. It could not be done. She swallowed the sigh that threatened to break free and accepted his hand with a muted word of thanks and a vengeful glare. She clutched her manuscript close while he reached forth with undeniable care and extricated her chignon from the tree limb that had accosted it. He snapped the twig between his fingers and worked it free of her hair. With a single heave he pulled her back to the safety of the lane so that she now stood beneath his prying gaze. She heard the fabric of the collar of her dress rip. Apparently, it had still been caught upon a branch.“Oh blast and botheration,” she spat. “Are you quite alright?”She looked up. “Yes,” she muttered uncharitably. If she had thought the horse a beast, she had yet to consider the gentleman. Faith, was slightly on the smaller side of middling height for the female sex and she was unable to gaze above his shoulder. Rather, he stood more than a full head above her. She felt dwarfed. Dark, brooding features and windswept hair that she suspected would look in disarray even after a fresh trim gave him a troubled and roguish appearance, just like she imagined Cassondra’s captain of the guard. She shook herself out of the thought. She was not Cassandra, and he certainly was not her captain. Still, she thought, a man such as this lived on the cusp of life, ever chasing the next bout of excitement, much like the hero in a novel.“Oscar Titherington, at your service,” he offered with a sweeping bow.Faith’s eyes grew wide at the revelation. Faith’s assumption was not far from the truth. Oscar Titherington had broken more hearts than Faith would care to count. She recognized the name and could see that he had deduced as much from her expression. She snatched at her journal in his hand, but he was too quick for her. He held the treasured possession just out of her reach and offered her what she supposed he meant to be a charming smile. 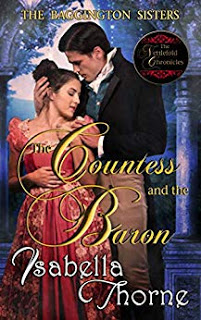 Isabella Thorne is an author of Regency and Georgian Romance. The first grown-up books she read were historical, authored by Georgette Heyer, Victoria Holt and Anna Seton. Unfortunately, for her own daughters, the beauty and hallmark of Regency Romance, witty dialogue and the manners of the time, have been overshadowed by explicit books instead of true Regency Romance. Regency Romance includes a more formal language, longer sentences and ballrooms instead of bedrooms.
With a return to romance, Isabella Thorne hopes you will enjoy her light fun books. You can share them with your daughters with the guarantee that although there is romance aplenty, and a bit of sexual tension and a kiss, there is nothing explicit in her books. They are clean and wholesome reads with lots of humor and upbeat “fun poking” at the English mannerisms of the time.