Trapped. Tortured. Only she can save him from the Hive.

Vice Admiral Niobe has resisted the temptation of the Interstellar Brides Program for years, certain there is no male in the universe willing to sacrifice his vision of a perfect life to be with her. Shocked to be matched to her father’s home world of Everis, she transports, expecting to find an eager mate waiting for her. Instead, she arrives within a secret Hive integration center to find him resisting a merciless enemy.

Elite Hunter Quinn might have been captured by the Hive, but he’ll sacrifice anything to save the mate he never expected… never imagined would appear like an angel in the middle of hell. A warrior in her own right, Niobe’s too stubborn to leave him behind. And even if they escape the Hive, their personal scars run deep. Battle and bloodshed are easy. But healing a wounded warrior’s heart? That may prove impossible.

Available at other retailers soon

The female jumped onto the transport pad and the Prillon captain positioned himself between her and the corridor in a protective stance, not just that of a warrior protecting a helpless female. There was too much knowledge in his eyes. Respect.
Who was she? I.C.? I didn’t know any fighters with command codes. Unless she was just the victim of an accident and a transport tech had accidentally sent her to the wrong place.
Yeah, no. She was too intelligent, too quick and keen for something as ridiculous as that. And if something that random had brought her to me, that transport tech was most likely headed for a Coalition brig.
I felt the vibrations, heard the hum.
“Everyone ready?” she asked, glancing up at the six of us on the transport pad. It had been about a minute since the prisoners arrived, and they were being sent right back out of here. They were lucky.
So fucking lucky. The Atlan who was dead weight at their feet, too.
“Fuck, yes,” I said. The others shouted and growled their agreement. They’d been defeated, but their fight was back. We were getting the fuck out of here.
I heard the pounding of feet with my Hunter senses. “Incoming,” I said.
She nodded, either she believed me or could hear them, too. It wasn’t time to wonder which.
“Five seconds,” she said.
I moved with speed to stand beside her. I tipped up her chin so she’d look at me. Made her take one of those five seconds to focus on me.
“Who are you?” I asked. The hairs on my body stood on end from the impending transport.
Three seconds.
Two seconds. The team of Hive ran into the room. Out of the corner of my eye, I saw their weapons raised. The other warriors fired at them, but I ignored it all. I could only see her. See the female who’d saved my life. The lives of six warriors.
“I’m your mate.”
One second.
And we were gone. Transporting out of the Hive hell and to safety. With my…
Mate. 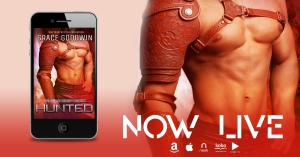 Grace Goodwin is a USA Today and international bestselling author of Sci-Fi & Paranormal romance. Grace believes all women should be treated like princesses, in the bedroom and out of it, and writes love stories where men know how to make their women feel pampered, protected and very well taken care of. Grace hates the snow, loves the mountains (yes, that’s a problem) and wishes she could simply download the stories out of her head instead of being forced to type them out. Grace lives in the western US and is a full-time writer, an avid romance reader and an admitted caffeine addict.