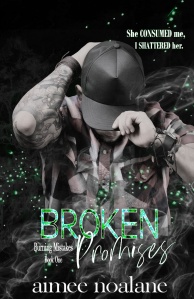 A split-second decision. A costly mistake.
My skin has been marred, slashed, burned and bruised.
My bones have been severed and broken more times than I can count.
I’ve been told I was unworthy. Fought through life seeing nothing but black.
But it’s a pain I welcome.
An ache I deserve.
UNTIL HER
She is my redemption.
The flicker of fire that dances in my darkness.
Our love is effortless.
Our love is a lie.
A desire
A delusion.
A MISTAKE
She should have known better than to entrust me with her heart.
I should have known destiny wouldn’t give me a second chance…at least not one I could keep forever.
The black cloud is back.
And revenge is the only thing it has on its mind. 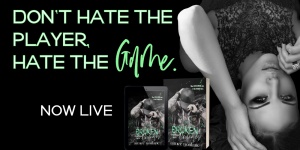 Available at the following retailers
for a VERY limited time


“How the hell should I know why she hasn’t stopped by this week?” I defend. “She’s probably just busy preparing for her mid-terms or some shit.”
“Try again, dickhead.”
“What do you want me to say, Vince?” I hate how guilty my voice is right now.
“How about the truth? Or if that’s too hard for you, then maybe explain why you’ve been staring at her like she’s about to disappear.”
“Are you telling me that I can’t look at her either now? I’m just keeping an eye on her… or do you have issues with that too?”
“She doesn’t need you looking out for her,” he bites back. “That’s what she has me for.”
“Whatever.” I’ve had enough. Enough of him, enough of her, and enough of our pointless frustrating conversation. I stand up from my chair and march out the front door.
“For fuck’s sakes, Lambert,” Vince snaps, following me out. “Is walking away from this really how you want to finish our discussion?”
I pull off my ball cap and run a hand through my hair.
I don’t know.
I don’t know what to say. I don’t know what to do…
I don’t fucking know.
Vince is my best friend. I broke his trust by falling for his sister, and I’ve been lying to him about it because pretending that my feelings aren’t real is better than the outcome of telling him I broke my promise. And the worse part of it all: he has every right not to trust me. I could never be the man Aubrey deserves. From the day I was born, destiny has made sure I would be spending my entire life being deprived of that luxury.
Everything I touch, everything I love turns to ash.
I raise my shoulders before walking away. “I guess it is.”
“Who the hell would have guessed that my best friend was a fucking pussy,” he jeers when my back is turned.
“Excuse me?”
A shadow of a smirk crosses his face. Had I not spun on my heels when I did, I would have missed it.
“What kind of man are you if you can’t even step up to your own feelings?”
“A loyal one,” I argue. “One who decided to respect his best friend’s wishes when he said his sister was off limits.” 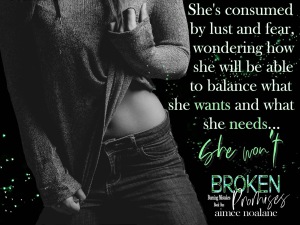 Aimee Noalane is a Canadian author and proud mother of three beautiful children. Having a military father allowed her to travel the world, but she is now living in a small town in Quebec, Canada.

After studying marketing in college, she became a customer service coach and instructor. A few years into her career, she decided to leave her teaching job and chose to devote her time to children in need, becoming a full-time foster parent.

In 2015 she woke up with a vivid image of Abbygail and Oliver. For a few days, their story would play out in her head and being unable to concentrate on anything else, she decided to sit down and write down their constant bickering. Little by little, her words turned into the chapters of her first series No Regrets, which was published in 2016. 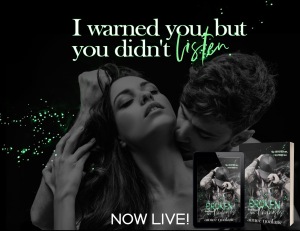 One thought on “Broken Promises by Aimee Noalane”