Ice is an asshole, but he’s working on it. He’s two years sober, no small feat when you front a heavy metal band facing waning popularity and dismal ticket sales. But the pieces of a life torn apart by alcoholism are finally coming back together. His band, Wounded Martyr, has written a great album with the potential to launch them back into relevancy. And Ricky, probably the biggest, most important piece, has finally forgiven him for the wreck he made of their relationship. There’s only one problem. Ashton. It was to be expected. As his best friend and bandmate for almost twenty years, it’s only natural they should find each other in the loneliness of the road. Ricky knows about their one night together, but he doesn’t know that Ice can’t stop thinking about it, about his long body and whiskey-flavored lips, and the guilt of it has him on the brink of backslide. Now that Wounded Martyr is poised for a long tour, Ice must find a way to resist temptation or risk blowing their last chance and destroying his relationship with the two most important men in his life.

Wounded Martyr Courtney Maguire © 2019 All Rights Reserved Everything hurt. Hiding in our dingy dressing room toilet, back pressed against the wall between the sink and the urinal, I read wall graffiti to take my mind off my sore joints. Black Sharpie marker slander tucked between worn band stickers. Jake is a pussy. For a good time, call. Someone had scrawled SUX over a Wounded Martyr sticker in the corner. An old one. Apparently, we’d played here before. I couldn’t remember. House music vibrated through the wall, and I pressed my shoulder blades into it. I gave a no-smoking sign the finger and pulled a pack of cigarettes out of my pocket. This used to be my favorite part, the anticipation in the moments before we hit the stage. Now, I shook with a mix of adrenaline and dread that made me queasy. “Ice!” A familiar voice cut through the din followed by a rapid knock on the door. “Dude, you in there?” I popped a cigarette between my lips. “Fuck off, I’m taking a shit.” The door opened anyway, and in slipped Ashton. Ash. Hair in his face and dark liner around his eyes. Deep lines framed his mouth, but his too-long limbs made him appear perpetually boyish. The way I would always see him. The sixteen-year-old kid playing bass in his garage. “You can’t smoke in here.” I scowled and shoved the cig back in the pack. “Dante is going to lose his shit if you don’t get out there,” he said, closing the door behind him. Dante, our self-appointed fearless leader. If he wasn’t such a goddamned great guitarist, I’d kick him in the teeth. “Dante can suck my cock.” “Pretty sure he’s not into that.” We shared a laugh before his eyes pinched in concern. “How’s the voice?” “Tired,” I answered on the tail end of an exhale. “You can make it, man.” He stepped toward me. “Just three more shows, and we’re home.” “Have you seen the house?” “Yeah.” “Is it full?” He pressed his lips together, and those lines around his mouth deepened. “Shit.” “Don’t sweat it.” He squeezed my arm. “It’s a big house. It would be hard for anyone to fill. Besides, we’ve played smaller.” I nodded, but my stomach dropped into my toes. Sure, we’d played smaller. I remembered playing crowds of twenty people, ten of whom hated us. But we were eighteen with nowhere to go but up, and nothing to lose. It felt different now. Ash’s expression softened. “What do you need?” A drink. “A blow job from John Stamos.” “You and me both.” He hooked his hand around the back of my neck and pressed our foreheads together. “You’ll be great,” he said. “You are great. Just another day at the office, man, you got this.” I leaned into him and released a long breath. Just another day. Another day I got to play rock and roll. Living the dream, most would say. But even dreams didn’t last forever. “What the fuck are you two doing in there? Put your dicks away, and let’s go,” Dante’s gruff voice shouted from the other side of the door. Ash shot me a mischievous grin and dropped to his knees just as the door swung open. “What the fu—” “Be right out, Boss,” I said, but he’d already stomped off, spitting and cursing the whole way back to the dressing room, his bright copper skin dark with an angry flush. I gave Ash a kick with my heel, and he rolled over backward, tangled in his own legs and howling. “Homophobes are fun,” he said between gasps. “You’re a prick,” I said, but I was smiling, my earlier dread carried away in the stream of his laughter. Dante had left the door open, and the house music pounded through me, ringing the tuning fork inside. It was still there, thank God. I offered Ash a hand and hauled him up. “Ready to go?” he asked, his hand still wrapped in mine. “Let’s get to work.” 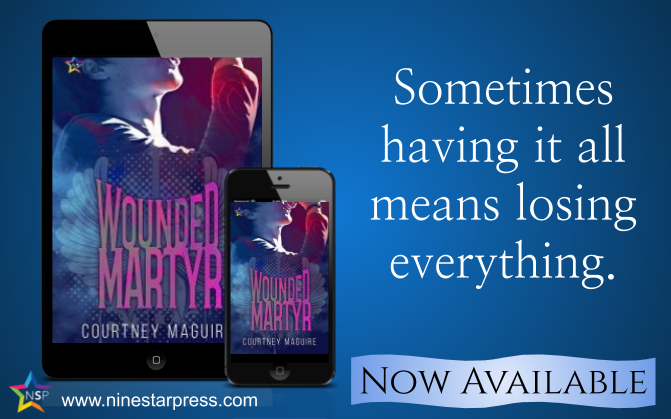 Courtney Maguire is a University of Texas graduate from Corpus Christi, Texas. Drawn to Austin by a voracious appetite for music, she spent most of her young adult life in dark, divey venues nursing a love for the sublimely weird. A self-proclaimed fangirl with a press pass, she combined her love of music and writing as the primary contributor for Japanese music and culture blog, Project: Lixx, interviewing Japanese rock and roll icons and providing live event coverage for appearances across the country. Her first novel, Wounded Martyr, is a 2019 RWA® Golden Heart® Finalist in the Contemporary Romance: Short Category.