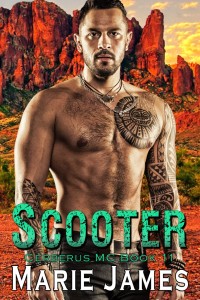 Scooter by Marie James is LIVE!!! FREE in KU!

I work with the Cerberus MC for the thrills, not for the glory.

Saving people who’ve been trafficked is just a side benefit, coming in second to the adrenaline rush of eradicating some of the evil in the world.

Mia Vazquez didn’t seem to get the memo.

When I pulled her out of Hell, she wouldn’t let go. She literally wrapped her arms around my neck and refused to release me.

I did the only thing I could do; I held her back.

For weeks I stayed by her side, comforting her and assuring her things would eventually get better.

She managed to climb inside of me, and then she took off.

Mia Vazquez didn’t get the memo.