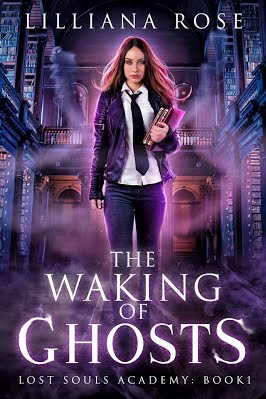 There is an evil awakening.
At the Lost Souls academy, students aren’t your typical everyday alumni.
Rejects from clans, packs, and covens walk these halls, but there’s something more sinister haunting the academy.
A resident ghost has a new student, Zarya, on the fight to banish it. Will her actions cause more enemies at her new school than friends?

‘I’m coming for you.’
A message from beyond has Zarya fearful. Her skills are underdeveloped, but as a ghost hunter, she must stand and fight this new evil.

Can Zarya grow to be the ghost hunter she’s destined to be or will forces overpower her and bring chaos and destruction to the Lost Souls academy?

Confused, Zarya looked around. Leaves rustled on the surrounding trees in a chaotic movement, so she couldn’t see the direction of the source. The park seemed to darken in the afternoon light. Time slowed. Her senses sharpened as she engaged both her ghosthunting and witching abilities.

Another chilled rush of wind wrapped around her. Every muscle in her body fired on alert, ready to contract so she could spring into action. The problem was with nothing obviously there, she couldn’t fight back, let alone defend herself.

Adrenaline coursed through her body. Zarya ached to release the pent-up energy instead of being unable to do anything.

Snapping her head to the left, then the right, she scanned her surroundings, desperate to detect any anomaly. Her skin prickled as she realized she was the only person in sight. Zarya realized with a panic she was way too vulnerable there. That this might be some sort of trap, even though she was certain ghosts weren’t capable of that type of thing. The ghost was here somewhere, it had to be. It was the only logical reason why she saw nothing.

There was no vibe that this was a spell, so it had to be a ghost.

Was that laughter in the air?

She glanced to the left where she thought the sound might’ve come from.

What the hell is happening?

“Chicken,” Zarya yelled out, struggling to keep her nerve. She summoned her magic, ready to block anything that might attack her, but again she was too slow.

A coldness wrapped around her neck. She gasped. Air pushed from her lungs. Unable to refill, she wheezed hard. Cursing herself for being so slow to react, she knew better than to have stayed exposed as she had on the ground.

Why didn’t I get up and run?

She knew damn well-running wasn’t her thing. She was a fighter through and through, and her style was to stay and fight. It was a good skill to have as a ghosthunter.

Zarya sensed the ghost was different than what she was used to. An old soul, perhaps? Confusion stirred. A spirit that had decided not to cross over. That was rare, and it was something to be concerned about. A ghost that was here by choice had more of an agenda than one who was confused and had unfinished business or simply wanted to bring chaos to people. A ghost-like this wanted more, to achieve something darker, to exert their will on others.

Her head began to spin from the lack of oxygen, and she couldn’t quite manage to fight back. It was as if she were frozen, held in the grip of this powerful spirit.

Zarya forced her eyes open, trying to see if it would show itself, to quietly challenge it to look at her. She only saw the park. Her vision began blurring. She commanded herself to stay conscious, but it was becoming too hard.

With the last slither of awareness, she conjured a spell, her lips moving quickly to build the magic she needed. Then she blasted the energy from her hand around her. The magic aimed to push away whatever it was harming her and to put up a protective barrier, so she could hopefully get her breath back before it attacked again.

She gasped a lungful of air as the grip around her neck released. Without missing a beat, she sent another wave of energy to build up her shield.

Then she felt it in her mind.

Before she could push it away, it spoke to her.

Lilliana Rose is an Amazon Bestselling author, who writes romance in the subgenres of contemporary, paranormal, steampunk, and rural. She enjoys helping characters overcome problems or issues, and the misunderstandings that often plague relationships, to help them fall in love. Whether it’s city heels being replaced with country work boots, or some magic beyond this world, or cogs and gears and corsets, each story shows how love can prevail. She has over fifteen years’ experience in various education systems as a teacher, a skip and a jump from starting out in genetics research. It is all helpful for inspiring her writing. She has poetry, middle grade, picture book, novellas, and novels published under various pen names.

Check out more of her work at http://www.lillianarose.com and as an Amazon Author and her blog on inspirational creativity and wellness, Café Pondering http://www.cafepondering.com and Cultivating Creativity Workshops.