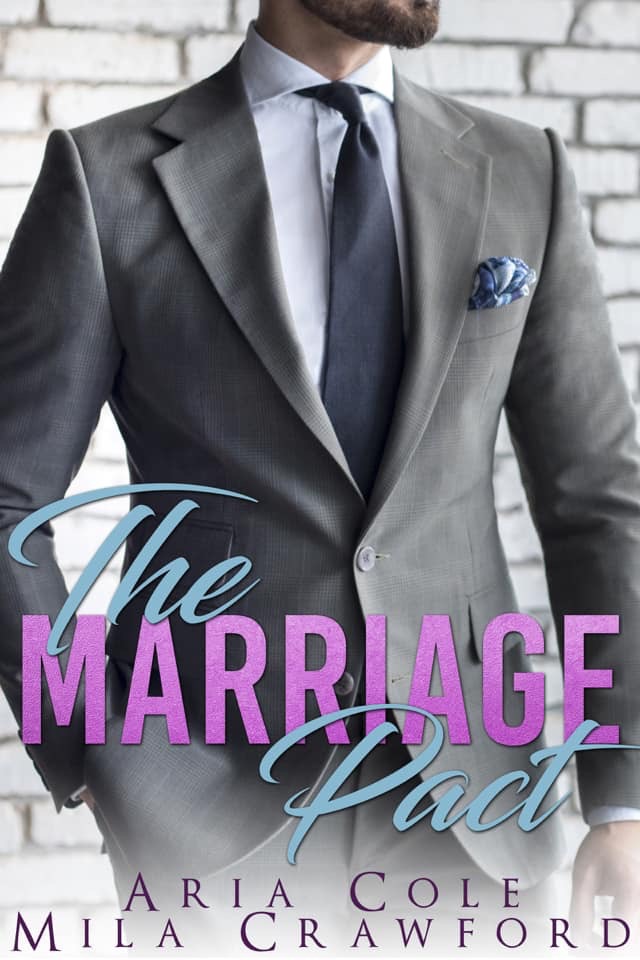 The arrangement was supposed to be simple.

Playing the part of perfect spouses should have been easy. She would get one hundred thousand dollars to pay off her debt, and I’d inherit my father’s fortune.

But nothing is cut and dry when it comes to love and lust. Now, we’re in a marriage pact that’s about to set flames to both of our lives forever.

Warning: An Over the Top Alpha meets his girl and won’t ever let go.

“Would you believe some of the people in this city?” Julio shook his head, tossing the Classifieds section at me.

“Dog walkers?” I searched the small black type as I held my honey almond latte between my hands. “I’m good with dogs. If I don’t get picked up for a decent show soon, my broke ass will be headed back to Nebraska. My rent is going up next month. I’ll literally walk every dog in a ten-block radius if it means I don’t have to move home.”

“Next ad down, girl.” Julio clucked his tongue before tamping the freshly ground espresso into a basket and turning on the drip. He cocked his hip to one side, the dark beanie on his head tilted to a lopsided angle to give him an edgy barista vibe.

He tipped it in just that way every single day, and it made me laugh. I’d been coming to The Last Good Beanery since I moved to the block. The coffee was good, the company even better. It helped that Julio was also an aspiring actor—like attracts like and all that.

I told you the last time you dragged me into a male strip bar… Looking at hunks with junk isn’t for me. I’d rather just fantasize.”

“Well, fantasize all you want, honey, but the last time I escorted you to a male revue, you talked about the sanitation practices in place and distracted all the male dancers. Ruined my fantasy totally. Now, you little pervert in pigtails”—he tugged on one of the braids escaping my knit hat—“the other ad.”

“The other ad?” I frowned, squinting when I spied a tiny ad in a box, one sentence only: Dedicated woman needed for full-time position, no questions asked, 4 mos/$10k.

“Dedicated woman, huh? Whaddya think that means?” I mused when Julio stopped steaming the raw almond milk and could actually hear me over the machine.

“I dunno, honey, but that sounds like a desperate individual. My grandma always said only bad things happen when people got that desperate kinda feeling.” He nodded, modern sage that he was. “Heck, it could be people harvesting organs out of a penthouse apartment. You never know these days.”

“Risky.” I nodded, reading over the ten-digit number. “It’s a local area code, so there’s that.”

“As opposed to one from the valley?” Julio took his time pouring his freshly steamed milk into the design in the espresso foam: a four-leaf clover ringed with cafe steam. “Look here, honey. If that ad said seeking dedicated man, I’d be on it faster than you can say ‘RuPaul’s Drag Race,’ but it doesn’t say that, does it? He’s seeking your type.” He wagged a comedic finger.

“My type?” I laughed, sipping the last of my latte before setting it on the counter as I pondered the possibilities. “How do you know it’s a he, anyway? It could be a woman.”

“Oh, it’s definitely a man. Only a man would be creepy enough to say no questions asked in an ad for a position.” Julio winked at me before spinning on his booted heels and delivering his newest caffeinated creation to the end of the counter.

“I thought you said it was too risky?” I mused when he returned and swiped my empty cup.

“Did I say that?” He dumped the mug into a streaming vat of soapy water. “Well, you know I like risk, honey. I mean, you know I already bought my tickets for that new revue.” He leaned in close and folded his arms on the polished wood of the counter. “You know you can come with me if you want. I haven’t asked anyone else. You’re my favorite friend to exploit.”

“Gee, thanks.” I shook my head. “I guess that makes me your favorite pigtailed perv?”

He cracked a grin and tugged on my opposite braid. “You know it. Now, whaddya say? Another coffee?”

I shook my head, already feeling the caffeine doing its job at jump starting my motivation. “No, thanks, Julio. I’ve got an audition later.” I stood, shrugging on my coat, eyes skimming the tiny ad one last time as a surge of adrenaline rose in my heart.

“Mind if I take this?” I swiped the copy of his newspaper.

“Read it front to back three times already. Take it, sister. Just promise to fill me in on that risky business once you call that number.”

“What? I’m not calling that number.” I folded the paper and tucked it inside my coat.

I rolled my eyes, making my way out of the coffee shop as the phone number played on repeat in my head. I didn’t even need the paper to remind me. It was already mapped out behind my eyelids.

I pressed my lips together, fetching my phone from my bag as I thought about harvested organs and dog walking and my hiked rent and earning ten thousand dollars over the next few months.

I was desperate, there was no doubt about that.

I punched out the number on my phone, slowing my walk to a stroll when the call rang once and then flipped over to voicemail. A long beep signaled it was my time to speak. I swallowed, a million reasons running through my head to hang up the phone right now.

“Hello, I’m calling about the ad.”

Aria Cole is a thirty-something housewife who once felt bad for reading dirty books late at night, until she decided to write her own. Possessive alpha men and the sassy heroines who love them are common, along with a healthy dose of irresistible insta-love and happily ever afters so sweet your teeth may ache.

For a safe, off-the-charts HOT, and always HEA story that doesn’t take a lifetime to read, get lost in an Aria Cole book!
Follow Aria on Amazon for new release updates, or stalk her on Facebook and Twitter to see which daring book boyfriend she’s writing next!

Sign up to get a NEW RELEASE ALERT from me!
http://eepurl.com/ccGnRX