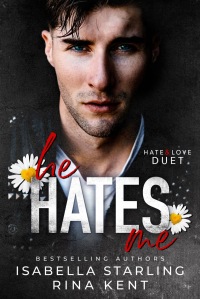 What happens when the stalker finds his prey? Obsession, darkness, and madness unravels. All wrapped in intense passion. Rina Kent & Isabella Starling join forces to bring you mayhem! Pre-order the highly anticipated Hate & Love duet. He Hates Me releases on April 9th with the conclusion He Hates Me Not releasing April 23rd.

Once upon a time, there was a monster.

When the night falls, he comes out to harvest souls.

He’s silent and invisible —no one notices when he strikes then retreats to the shadows.

Our paths shouldn’t have crossed, but they do.

One day he sees me.

Then he can’t unsee me.

Once upon a time, there was a monster, a killer, a devil.

He Hates Me is part of a duet and is NOT standalone. The entire duet will be released two weeks apart.

He Hates Me Not

Once upon a time, there was a girl.

She hid secrets and scars behind a blinding smile.

Until I decided to confiscate that smile, watch it, trap it, own it.

She calls it an obsession, a madness, but she’s seen nothing.

The moment I noticed her, her fate was sealed.

Then she became a key player in my unhinged game.

Once upon a time, there was a girl, a liar, a fraud.

He Hates Me Not is the second part of a duet and is NOT standalone.

To celebrate their dual cover reveal, Isabella Starling and Rina Kent are giving away a $25 Amazon Gift Card. Head to Rina’s Facebook page to enter: https://www.facebook.com/rinaakent/

← Lies We Tell by Jeana E. Mann
If I Fall by Amber Thielman →