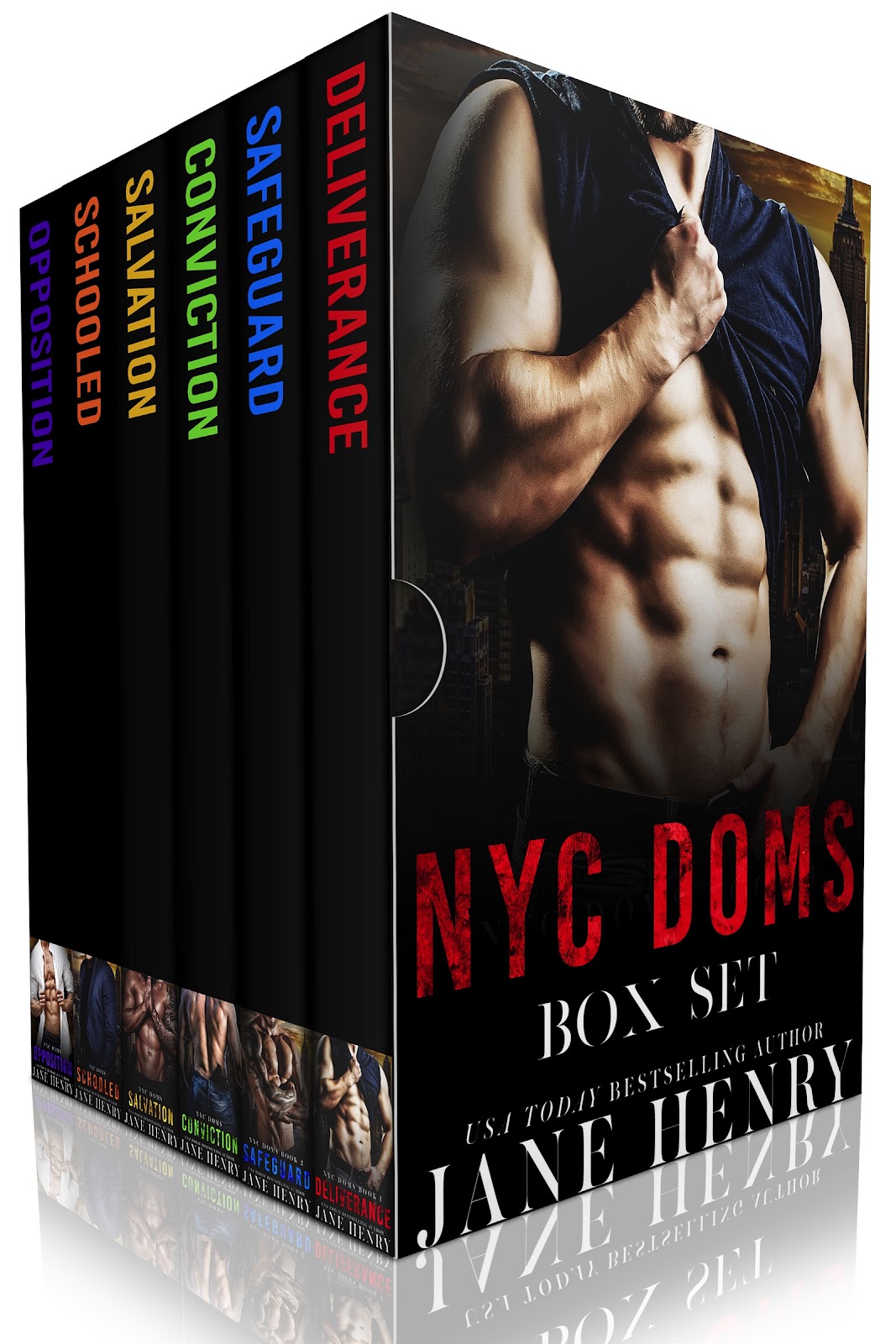 For the first time ever, all six of USA Today Bestselling author Jane Henry’s NYC Doms are available in one boxset! Fall in love with the Doms of NYC. They’ll steal your heart, make you swoon, and bring you to your knees.

Tobias Creed likes things done his way, and he likes his women ready to submit. No strings attached. Until the night he meets the one woman who challenges him, practically begging to be taken over his knee.

As a single mom to a child with special needs, Diana McAdams does things her way. She’s in control and doesn’t have time for love. Happily-ever-afters aren’t for her.

Then she meets the man who demands her submission…

Safeguard
The engagement may be fake, but the handcuffs? Not so much.

I don’t do half-assed relationships. When I set my sights on the most headstrong, tenacious submissive I’ve ever met, I’m all in. I’ll show her the dark, sensual world she craves, dominate her, and leave her begging for more. But when her safety’s endangered, she needs more than a dom: she needs a safeguard.

Braxton Cannon can’t get the girl on the dance floor out of his mind, the woman he literally swept off her feet and into Club Verge. She’s no submissive, but he can’t help but admire her ferocity, even as he yearns to take her over his lap and teach her manners. He’s determined to keep her safe if he has to lock her up himself.

Officer Zoe Mackay can handle herself. But when she learns information that puts her life at risk, she’s forced to seek the assistance of a private investigator. Little does she know the man she hires is none other than Braxton Cannon, the high-handed dominant who gave her the hottest one-night stand of her life.

With her assailants in hot pursuit, Zoe is forced to seek refuge in Club Verge, where she finds way more than she’s bargained for…

Seven years ago, she was sheltered. In need of guidance. I was a newly-ordained priest with a vow of celibacy. Our torrid love affair ended in heartbreak.

We broke it off and went our separate ways.

I left the priesthood. She left her home.

Seven years later, she’s stranded in my NYC Club while a blizzard rages outside, and she wants a taste of dominance.

I won’t let another man lay eyes on her, much less touch her.

She’s still my everything. My salvation.

And there’s no way I’m letting her go…

I never fraternize with my students.

But when Giada Romano walks into my classroom, my perfect resolve crumbles.

And bratty as hell.

I’ll bend her over my desk and teach her the manners her daddy should have taught her.

I hate his Rolex.

I hate his scowl.

I hate everything his multi-billion-dollar company stands for.

When the pompous, rich, arrogant jerk comes strutting into the coffee shop, I barely manage civility.

But people make mistakes, and when I screw up, it’s epic.

I never expected the jerk would actually be a well-respected member of Club Verge.

I never should have trusted the masked stranger when he beckoned me.

I never should have taken him up on his offer.

And the biggest mistake of my life?

Letting him kiss me.

USA Today bestselling author Jane Henry pens stern but loving alpha heroes, feisty heroines, and emotion-driven happily-ever-afters. She writes what she loves to read: kink with a tender touch. Jane is a hopeless romantic who lives on the East Coast with a houseful of children and her very own Prince Charming.

Connect with Jane at http://janehenryromance.com