There were plenty of other middle schoolers it could’ve chosen. Six-hundred and eighty-six, if you didn’t count Clifton. The Arrow of Light appeared in his closet then whisked him away to a far-off land, where a dwarf and magical bird led him to two princes. He returned their arrow that he had somehow found and went home to his normal life. But the Arrow of Light had other plans. When Clifton found out that the king locked the princes in Drofflic Tower, he knew he must return to the past to protect the future. Enlisting the help of many mythical creatures and the princes’ own sister, he managed to find the reason the Arrow of Light chose him. But magic can be wrong. And history longs to be told.

The Boy and the Arrow 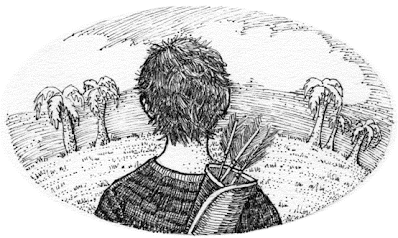 The thought that this was a brainless thing to do hadn’t crossed his mind until now. He fumbled to fit his bow, his fingers like gelatin, as classmates lined up beside him in Wickham Park. The rest of the seventh graders gathered around to see who would win the bet between Clifton Chase and the new kid, Ryan Rivales. The instructor counted down the seconds from his stopwatch, and Clifton swiveled around to see if a certain pair of green eyes watched him. Yup. Even Ava Harrington had come to see.

As sweat stung his eyes, Clifton remembered why he’d taken the bet. It was this arrow. He’d found it mysteriously in his closet, and then it lit up for a split second. At least he thought it had. It seemed so otherworldly at the time, and when Ryan started in on him, the only thing he could think to do was show that kid up.

Now he wasn’t sure.

He pulled the notched arrow back. He had one chance, a single-shot test for precision, straight to the bullseye or whoever came the closest. Ryan wagered his sleek emerald green binary compound bow, but they both knew this bet was not about the antique arrow or the slick bow. It was for bragging rights, for pecking order.

For making it through middle school as king.

On command, arrows arced through the air, landing on the targets or the wooden posts they were nailed to. Some struck the 3D molded deer, which now resembled a porcupine. A few arrows passed their marks altogether, landing out of sight in the tall grasses of the hilly sand dunes. ‘The Hinterland’ as it had been nicknamed. And that’s where Clifton’s arrow went.

“Archers….Halt!” the instructor shouted. “The range is now cold. You may retrieve your arrows.”

Clifton lifted his backpack and stepped onto the range with the others.

“What happened?” Ava asked. “You usually have perfect aim.”

Clifton’s hands went clammy whenever she came around. It hand’t always been that way, just recently. “Yeah well, I guess that crappy arrow wasn’t as good as Ryan thought it was.”

“Why’d you make that bet with him? Didn’t you say you found that thing in your garage or something?”

“My closet, actually.” Sunlight brightened her eyes and he stared a moment longer than he’d meant to.

“Except my arrow,” said Ryan as he neared them. “Nice shot, by the way.” He snickered, and the few kids who’d tagged behind him laughed.

“Wasn’t my fault,” Clifton said. “I’d never shot it before.”

“Doesn’t matter now. I won the bet. My arrow didn’t even need to land near the bull’s eye, just on the target.”

Ryan shoved him. “Where you going, Chase?”

Clifton did a one-eighty. “Going to get that worthless arrow you won. Must feel good to know your shot beat an antique.”

Ryan’s smile dropped. “My shot,” he said in a clipped tone, “beat your shot. Now go find my arrow and hand it over.”

Clifton’s hands balled into fists as he left the circle to reach the edge of The Hinterland. Ava followed.

“I can’t believe what a jerk that guy is,” Clifton said. “Can you believe how epic he thinks he is? Like he’s the greatest archer of all times…Robin Hood Rivales.”

Ava’s hands perched on her hips. “You’re the one that tried convincing him your arrow was something special, when you knew it wasn’t. Seems like maybe Ryan’s not the one being the jerk. See you later, Clifton.”

Clifton lowered his head, defeated. He’d lost the arrow, lost the compound bow, lost his dignity, and Ava thought he was a jerk. Now, he had to trudge through The Hinterland looking for the ridiculous arrow that started it all. He swore under his breath and headed up the dune.

Across the way, Juan Sanchez, another victim of inaccuracy, scanned the brush facedown like Clifton. He was about to suggest they join forces when something sunk through his sock into his ankle. Sandspurs. He’d run through a whole patch and took a few minutes to pick them off, which hurt his fingers as much as his ankles. As he avoided a red ant pile, he almost tripped on a root that jutted up like a step.

And still, he hadn’t found his arrow.

About to give up and turn back, he glimpsed something copper-colored in the tall brush up ahead. Clifton spread back the grass to reveal the fletching. Were the feathers swaying? Nah, they couldn’t be. There wasn’t even a breeze. Then, he remembered how the shaft had glowed in his bedroom. No, way. This arrow was as plain as any other. And what did it matter?

It wasn’t his anymore.

He grabbed the arrow, and as soon as he touched it, a wave of dizziness passed over him while a CRACK filled the air. Clifton stood, turned to head back toward the range, but froze. He was standing in the middle of an open field covered in yellow flowers that rolled like carpet into the base of  the surrounding snow-capped mountains.

The Hinterland was gone, replaced with a shimmer in the air like heat off a highway. And with a sudden sweat he realized that Wickham Park was gone too.

Jaimie Engle writes fantasy thrillers for teens and tweens. Her anti-bullying message has reached tens of thousands of students throughout the US, and her books have hit #1 on the Amazon New Release List. Metal Mouth, her magical realism for teens, is a contender for the 2020-2021 Florida Sunshine State Book List!  Before publishing her first novel, Jaimie danced at the Aloha Bowl halftime show, was an alien on Sea Quest, and modeled bikinis for Reef Brazil. When not writing, Jaimie can be found on TikTok or cosplaying at comic conventions. Learn more at www.theWRITEengle.com.