Blurb:
Before the white man settled the Appalachians, he stood over the people of the Tribe, providing all they needed to flourish in the shadow of the mountains.
The many tribes have given him many different names. Wakan Tanko. Maheo. To the people that first hunted the corner of Appalachia known to later generations as Wright’s Holler, he was Weshemoneto, the Great Spirit.
To Anna Madeline Wright, he would simply be Wes. Born in the holler that bore her name, “Annie” Wright came from people that had learned to live on the land, people who believed in the magic saturating the woods around them. People who knew how to survive.
Circumstance of birth gave her power. Her skills gave her respect. Her magic gave them hope. In a town not yet influenced by the progress of the industrial revolution, Annie was a pauwau. A witch.
The winter of 1836 hit the town of McAllen hard and with her people in danger of annihilation, Annie called on the spirits for the power to save them. Her desperation called Weshemoneto himself. When they collided, she had to make a choice: Lose her town or lose her heart.
What happened next would become the stuff of legend for centuries to come.
Buy Links:
Audio | Universal 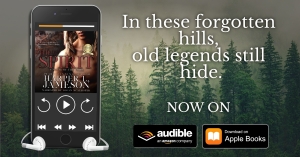 Harper L. Jameson has always had an active imagination, first finding her love of books through the works of renowned horror authors at a young age. Then with her mother’s influence, she found the romantic works of Beatrice Small and Johanna Lindsey and whole new worlds were opened to her. With the encouragement of family and friends, she began to create worlds of her own. Worlds of love and magic, of men and monsters and sometimes, they all intertwine in dark and delightful ways. Come inside, she has stories to tell.
Author Links:
Website: www.harperjameson.com
Newsletter landing page: https://www.subscribepage.com/HJNewsletter
Twitter: www.twitter.com/HarperJameson
Instagram: www.Instagram.com/HarperLJameson
Pinterest: www.pinterest.com/HarperJameson
Goodreads: www.goodreads.com/HLJameson
Bookbub: www.bookbub.com/authors/harper-l-jameson
Blog: https://www.harperjameson.com/blog/
Amazon: https://amzn.to/30UOSvy

Wes paused, masculine propriety threading through the lust riding his pulse as he got a fist in her hair and tugged, forcing her to look up at him. “No man has had you.” It wasn’t a question, the words more growl than actual speech as an ownership he had no right to feel burned in his chest. Pure. The woman was pure and kissing him like she needed his air to breathe, and he wasn’t civilized enough to stop himself now. Not when Annie wanted him as he wanted her. Nothing short of the world ending around them was going to keep him from having her.
“What?,” Annie panted out, stunned at the distance when he broke the seal of their mouths and struggling to right her mind when he had her spinning in a cyclone of confusion and desire that was making it hard to focus on anything but the way he was making her feel. She wanted more of it. He’d said something. “I…no, I haven’t…” It was her turn to chase his mouth, fluttering kisses to the corners of his lips as she pulled his braids to try and bring him back to her, cursing him under her breath for ever stopping. She didn’t want him to stop, not when he’d gotten her started. The ache between her thighs was echoing her pulse, hot and needy in a way she’d never experienced, but absolutely sure that he could ease her if she just got him close enough.
“You will be mine then, ni’wa.” Still not a question and followed by a claim that he wasn’t about to take back. He leaned in until his mouth was only a hair’s breadth from hers, his breath fanning her lips and his fangs glinting wicked points that ached to nip and score, marking her in the possession of man and spirit. “Understand this, Annie. No other will touch you. You will be mine and mine alone. You will lay with me while the snow falls. For that, I will bring your people to safety until the storm has passed.” Wes didn’t even know why he was giving her the chance to decide, but he would have her submission or he would not have her at all.
“Agreed.” Wes’s eyes were wild, churning molten gold with his own desire and it was a rush of power that she was the cause. Annie didn’t miss that he was asking when he could simply force her, but something told her that wasn’t what he wanted. His people had been forced to submit – to retreat – and she knew that was what that golden gaze meant. He wanted her submission. He would have it. But not yet. “Let me go back to the town. Let me tell them that they are safe, and you have me.” Only, she was having a Hell of a time forcing herself to let go of him, her fingers uncooperative in loosening their hold on his hair. She used her magic to help her let go, pushing off with a rush of sparking energy that finally tore her from his arms.
Annie stumbled, propping herself on a sapling and gasping to catch her breath against a separation that was as painful as losing a limb. She ordered her feet to retreat, but they only inched forward until she gripped a low branch, her knuckles white but holding her rooted in place before she ended up right back where she was before. “Wes, I have to tell them.”
The loss of her body was suffered with a roar, his fingers tipping in razor claws that curled into his fists and balled against the instinct to snatch her back. His jaw clenched, his muscles bunching in preparation to pounce. “Agreed. Go, ni’wa. Gather your people and tell them to be in this place at the setting of the next moon. I will take them to safety and return them after the storm has gone.” Wes stalked forward for two steps, a hand shooting out to sink his claws into the bark of the tree she leaned against. He loomed over her, his cock so rigid he was actually in pain, and he couldn’t promise that he would be able to hold himself back if she stayed much longer. “First…” He leaned in, his wicked canines slipping from his gums to score over her pulse, twin razors cutting across her skin in a claim that glowed on its bloodied edges with his ownership. “Go now and return to me before the moon has reached its peak tomorrow. This is done.” 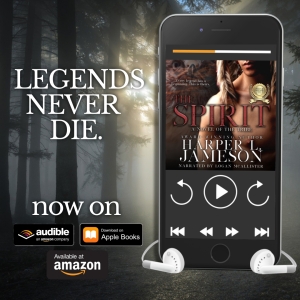