“The Until You series is definitely one of the best New Adult/Romance series I’ve read.” – Shirley Cuypers Blog

Some loves are just destined to be regardless of how hard they fight it or the obstacles they face.

Includes all NEW Book Covers and a NEW BONUS scene that can only be found in this custom eBook set.

Book 1: Until You Set Me Free
An emotionally charged romance, intertwined with tragedy, forces Joseph and Samantha to choose between their careers, their hearts, and the safety of the ones they love.

Book 2: Until You Are Mine
Samantha did what she had to do to protect the man she loves.
Joseph will do whatever he has to for the woman he loves.
But a murderer has other plans.
Can Joseph and Samantha find their way back to each other before time runs out?

Book 3: Until You Say I Do
Having won Samantha’s heart and trust, Joseph is determined to conquer his next challenge of making her his wife and priming her for a career at MCI. But an old nemesis threatens the woman he loves, shaking her to her foundation and jeopardizing their very happiness.

D.M. Davis’ Until You books 1-3 are suspenseful, angsty, heart-warming, destined-to-be, sexy romances that will shred your heart before putting it back together.

Life can change in the blink of an eye.

As a member of the Cerberus MC, an elite organization that specializes In the rescue and recovery of trafficked women, I’ve seen it happen more than once.

I’ve witnessed how easily a family can be torn apart from a single bad choice.

We’ve been too late before, and have to live with the guilt of how a few hours would’ve changed everything.

I’ve learned to accept that.

But I never imagined the biggest life-altering situation of my life would show up at our door bruised and bloodied, confessing her role in a man’s death.

#RABTBookTours #HeirofDarkness #RichardBellamy #SuhaAlKhalifa
It is the end of the 18th century, on a mountain range, in Bohemia. Lost souls who search desperately for love, family and acceptance will go to the extreme lengths of good or evil to reach their ambition. This undying will, brings together the living, the dead, and the undead in a tempestuous adventure of love, hate, jealousy and murder. The worlds of man, ghost and vampire will collide as they struggle to find a place to call home.
#Suprnatural #Gothic #Romance
July 16, 2020July 16, 2020 Book Review Virginia Lee Blog
This PB is gorgeous, enter today!

Want a chance to win 1 of 2 paperback copies of The Ghost of You by Tori Fox?

Want a chance to win 1 of 2 paperback copies of The Dangerous Son by Zoe Hill?

Billion Dollar Date by Bella Michaels is LIVE and FREE in KU! Spice up your summer with Enzo DeLuca!

With just two simple words, Chari Atwell storms back into my life.

Beautiful. Irresistible. The woman standing before me is not the girl I knew growing up.

And I’m not the same hopeful kid everyone thought was going nowhere fast.

Nowadays, I’m a hero. A celebrity. A man who isn’t content with the billions in his bank account.

Call me ambitious, if you want. I have my sights set on the rest of the world, and don’t have time for a relationship, including the one woman who still has the power to bring me to my knees.

I will not break.

I will not succumb.

Except that I’m used to getting exactly what I want, and after one chance encounter, it’s clear that what I want is Chari Atwell…

Even if she is my best friend’s little sister.

The author is giving away a $25 Amazon Gift Card and a signed paperback on her Facebook page. Stop by to enter: https://www.facebook.com/BellaMichaelsAuthor/

Bella Michaels is the pen name of a contemporary romance author debuting her first billionaire novel this summer. When not writing historical, paranormal and contemporary romance, Bella loves dreaming up new sassy heroines and alpha heroes for readers to enjoy. Firmly Team Gryffindor, Stark and Reylo, she lives with her husband and two pre-teens in Pennsylvania.

BOOK BLURB   What happens when a book blogger accidentally publishes her digital diary online? A viral shitstorm, that’s what. No way did I want thousands of subscribers to read my confessions—yet, that’s precisely what went down last night after four too many Cosmos with my girls. Now, Damage Control is my new middle name because my diary confessional has my roommate, Lucas Stone, written all over it. Literally. I’ve been in love with him forever—well, ever since I saw him sprint across campus naked during our first year of college. And now that Lucas knows how I feel about him? Well, things are destined to get awkward. Because Lucas Stone, my BFF—the man who sleeps only one room over—just got engaged. And his fiancée isn’t me.

PURCHASE LINKS Universal Link: https://books2read.com/Confessions-Of-A-Bookaholic Add to your Goodreads TBR: https://bit.ly/COAV_GR GIVEAWAY To celebrate the release of Confessions of a Bookaholic, Joslyn Westbrook is giving away a $25 Amazon gift card! Head to her Facebook page to enter: https://www.facebook.com/JoslynWestbrookOfficial TEASERS 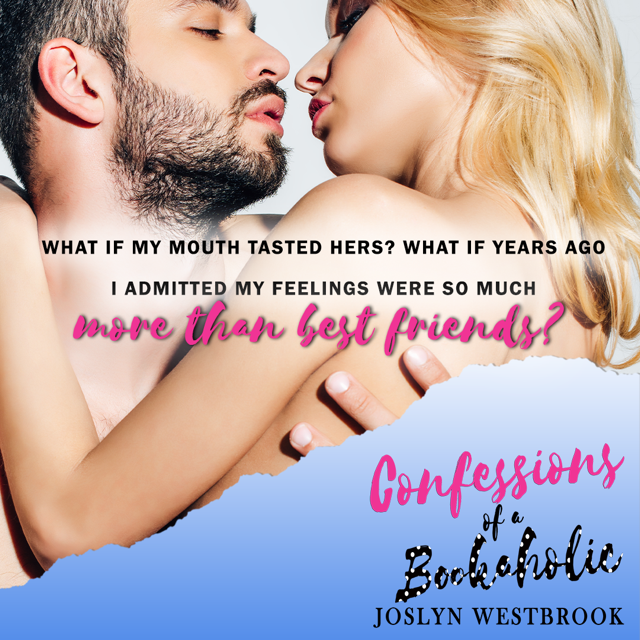 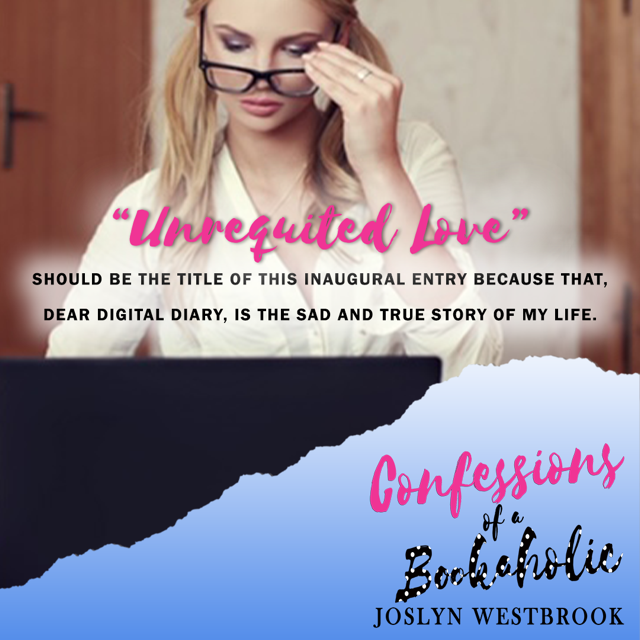 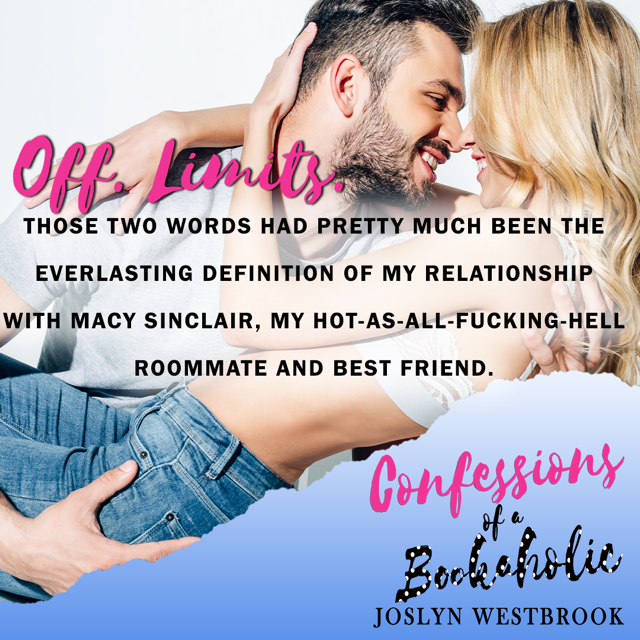 I fell in love once…
We were young, fresh out of high school. But I believed in us, I believed in our love.
He left to serve our country. Promising to always stay with me no matter where he was.
He broke his promise. He got on that bus and I never heard from him again.
So, I did what anyone would, I moved on. I left him in the past, right beside the broken heart gave me.
Five years came between us, five years for me to forget all about him.
Until the night he swoops in and saves me. The boy I remember has turned into a hard bodied soldier. His muscles are thick, his arms strong, protective, holding me like he never wants to let me go.
And his smile, his smile still makes my heart flutter.
I don’t know what to do. He hurt me once already.
Do I forgive him and give him a second chance?
Or do I let go of this man in uniform?

What the hell is going on right now? I’m so confused. The last thing I can vividly remember is dancing at the club. Now, I’m face to face with a ghost from my past. I never thought I’d see him again, no matter how many times I wished for this, no matter how many shooting stars I watched cross the sky, and said his name as they disappeared, I never thought I’d wake up and he’d just be here. Slowly, I walk to the table and take a seat. Wyatt helps to push me in, handing me a fork, and going back to the counter. “You still like extra cream and sugar?” he asks. “Yeah,” I say, my stomach tumbling softly. “I can’t believe you remember that.” “Of course I remember. I remember a lot more than just what you like in your coffee.” He winks, giving me a sexy little smirk. My heart lurches in my chest with that smile. It’s that smirk right there that drew me to him in the first place when I was sixteen, that same smirk that made butterflies flutter in my stomach, and my skin flush, and my heart race inside my chest. It’s the same smirk he would use after we had. . . Oh, oh no. No. No. No. My eyes jump to his, wide and on the verge of panic. “Wyatt, did we. . .” I pause, unable to even finish my sentence. He chuckles, and gives me a genuine smile. “No, we didn’t have sex if that’s what you’re asking.”

Growing up in a small town, Leah Holt’s imagination was able to run wild. She loves to write romance that is full of broken heroes you can’t help but fall in love with. Having three children of her own, life is filled with far too many cartoons and not enough bad boys. Writing has become an outlet for her to let out all of the dirty, forbidden thoughts inside her head. When she’s not typing to the point her fingers hurt, you can find her downing coffee and trying to keep track of reality. Which is never easy when she’d rather have her nose in a book or creating stories that will leave you breathless and wanting more.

TK
I live my life by rules – too many fucking rules. But, it’s the only way. I messed up once. I slept with the wrong girl.
Never again.
The rules are my life, my guide. Until she walks in, and one by one, they all crumble.
She doesn’t slowly creep her way in like a worm. No, she soars in, like an eagle, refusing to be ignored and digging her claws into my heart. Leaving me vulnerable, wanting more.
Wanting her.
Gracie
Home. Happiness. The words used to mean something.
Until that night – over a decade ago. When they were stolen from me and my parents forced us to move.
Now, I’m back in Alaska, flying bush planes for Homer Air. And, I’ll fight every step I take until they are real again. The only problem is the reclusive fisherman whom I can’t stop thinking about, despite us fighting every time I see him.

Cassandra cusses like a sailor, is addicted to tattoos, hardcore music, and chocolate. Her kids believe that she is an actual vampire. Oh, and occasionally, she has been known to write a book or two when not busy in her garden.
Her novels straddle the line between taboo romance and romantic suspense. With themes as complex and varied as the author herself, they are sure to leave you on the edge of your seat.