Blurb:
To put an end to the struggle between father and daughter, Susan and her team move against Lord Kennedy Marriot. Their goal is simple; to take control of the US branch of the business.
After returning from France, Luke prepares for war against Lord Marriott by bringing his secret weapon, Eva. After Luke, Matt, Susan, & Eva team up and Susan refuses to return home, Lord Marriot grows suspicious. After leading into a battle of who is in control, Lord Marriot hires a spy who will gain a foot hold in their group..
At least that’s what he thought.
Susan not only has tricks of her own on the inside, but Matt has history that Lord Marriot doesn’t know about that gives his group an advantage against Lord Marriot.
After the team finds out about Matt’s dirty little secret, they employ him to…
In this book, all issues from the past are resolved, Eva Devereaux makes a dramatic return, and Sophia finally gets closure. In a battle of power, where old love and lust run free, Unnatural Diaries Vol. III reveals old passions and and uncovers unknown mystery. This story includes MM, MF, FF scenes at various turns in this book.
Book Links:
Unnatural Diaries, Vol. I | Unnatural Diaries, Vol. II | Unnatural Diaries, Vol. III 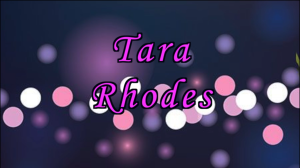 Hi! My name is Tara Rhodes, and I’m from San Francisco, California! I’m a full-time housewife, mother of 3 beautiful children, and part-time romance novelist. I love to write and I’m proud that I get to share my ‘Rhodes World’ with everyone in my spare time. I live a fairly simple life, but in my reads I share a hidden part of myself. I hope you all enjoy and spread the love and positivity as I share my reads with you!
Author Links:
Facebook: https://www.facebook.com/tararhodesromance
Twitter: https://twitter.com/tara_rhodes77
Newsletter: https://mailchi.mp/a32226a4e79e/tararhodesromance
Amazon: https://amzn.to/3jSyvqc
Goodreads: https://www.goodreads.com/author/show/19731869.Tara_Rhodes
Instagram: https://www.instagram.com/tara_rhodes77/

They were still eating when the clouds suddenly changed and began pouring down its contents on them. All four ran into the house as the rain fell on them. Once inside, Eva suggested they play a drinking game, and Matt laughed internally. He knew where this was going, and he liked it. Soon enough, Susan was drunk enough to be dared to kiss Eva. At first, Susan was surprised, but with the confidence from the alcohol, she approached Eva.
The kiss was naughty, sensual, more of a tease than a kiss, but Eva would not allow herself to be played with. She began kissing back, Susan had never kissed a girl before and had no idea how pleasurable it could be. She was melting under the influence of Eva’s kiss when Matt joined in and started kissing Eva. The kiss was urgent; it told her how much he missed her. His lips and tongue danced with hers, telling a story of longing. Her body lit up in response to his actions, and he was still at it when Susan pulled Eva off him and pressed herself against Matt. Luke could not believe what
was happening, but there was no way he would be left out. Luke pulled Eva to himself. From the time he met her in France, he had wanted to do this. He kissed her hard as she placed her small hands on his bare chest and ran them around his muscles. She moaned inside his grip, and it encouraged him to intensify his actions. They switched partners again. Matt and Luke began kissing each other as the girls also explored each other’s mouths.
“If we don’t stop now, we might go all the way,” Luke said, ever the prude.
“That’s the plan, darling.” Replied Eva as she began fondling with Susan’s nipples.