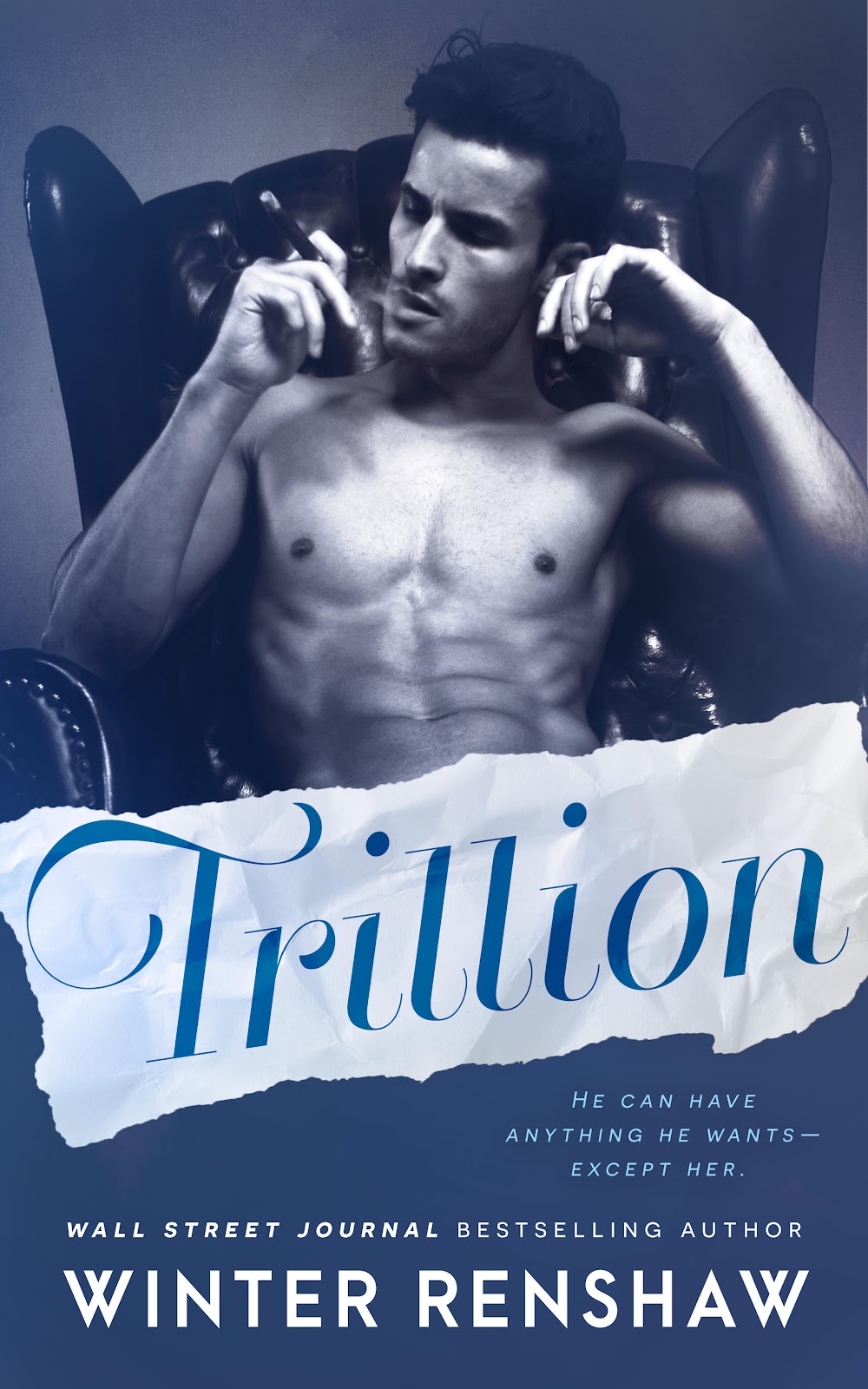 Trey Westcott—devastatingly gorgeous. Intimidatingly brilliant. Powerful beyond belief.
A man with all the money in the world—literally.
As the first trillionaire in existence, my boss lives a life most people can only dream of. Anything he wants—anything at all—is a snap-of-the-fingers away.
But when the coldhearted magnate snaps his fingers and requests me for a six month stint on his arm playing the role of his devoted fiancée, he makes an offer I can’t refuse.
And so I don’t.
But I make it clear that for the next 180 days, he’ll have my time, my body, my attention, my discreet professionalism—everything except my heart.
It’s not for sale.
Because all the money in the world can’t change the secret I’ve kept the last ten years. A secret that complicates the very business deal I’m to help him secure. A secret that makes the undeniable tension between us all the more forbidden.
Trey Westcott can have anything he wants … but he can never have me.
Even if he’s all I’ve ever wanted.


“So my cousin was at this party with Westcott a couple of years ago, and she claims he snorted pure Peruvian cocaine off a stripper using a ten thousand-dollar bill, and then, get this—he lit the bill on fire,” a woman’s nasally voice trails from the eighth-floor break room.

Never heard that one before …

I stop outside the door and listen. I’m on my way to a conference call, but I can spare a few minutes for some cheap entertainment, especially on a monotonous Tuesday. Most people hate Mondays. I hate Tuesdays. Mondays are full of hope and ambition for the week. Wednesday’s halfway to Friday, Thursday closer still. But Tuesdays? They’re boring, tedious. Generally unexciting.

“That’s nothing,” a second woman says. Her voice holds the desperate, youthful quality of a follower. A sheep who goes with the herd. I can sniff out those types a mile away. “I used to date this paralegal who worked for one of his attorneys. Said Westcott threw the most insane parties where everyone had to sign an NDA the second they walked in, and she was pretty sure everyone got roofied because the next day no one could remember what happened.”

I stifle a snort.

“I’d legit give an entire paycheck to be a fly on the wall at one of his parties,” the first one says.

“Right?” the second one—the spineless disciple—counters. “Did you know his house is, like, two-hundred-thousand square feet? I tried to look up pictures of the inside of it, but all I could find is this book that was written in the nineties when his parents were still alive. Not going to lie, I was kind of disappointed. Reminded me of a castle-version of my Nana’s house. Hope he’s updated the place. God knows he can afford it.”

The first one laughs. “Maybe he wants it to look old on purpose? Wasn’t he screwing that woman twice his age a few years ago? Maybe he likes old things.”

My jaw tightens. The woman to whom they’re referring is my aunt. She accompanied me to a bevy of fundraisers one year when I was tired of the revolving door of desperate women sucking my dick for a chance to get a photo with me on a red carpet.

I throw up a little in my mouth.

Only an ignorant idiot would mistake my aunt for a lover.

They’re lucky she isn’t here to listen to this bullshit. She’s made grown men cry with her sweet smile and cutting tongue. These two would be minced meat.

“Eh, I doubt that,” the other one says. “Did you see the last girl he dated? Freaking. Drop. Dead. Out. Of. This. World. Gorgeous.”

She was easy on the eyes.

I’ll give her that.

But that was about the extent of her admirable qualities.

“Didn’t he date two girls at once before? Like a throuple kind of thing?” Number two asks.

Dated? No. Fucked until I grew bored of them? Absolutely.

“Probably,” the other laughs.

“Do you guys actually believe all that?” A third woman interjects, her voice soft yet feminine but her tone direct, no-nonsense. “If he makes everyone sign NDAs at his parties, then couldn’t your cousin get sued for sharing that? And if your friend and everyone at that party thought they were drugged, wouldn’t they want to get tested? Also, they haven’t made ten-thousand dollar bills in decades. That, and I highly doubt he does coke. Everyone knows he’s vegan.”

“Also, what the inside of his home looks like is none of your business—that’s extremely invasive,” the third woman continues. “How would you feel if someone was Googling your address, trying to find pictures of where you slept? Where you ate dinner? And doesn’t one of you have a sugar daddy right now? You were just talking about your ‘allowance’ a minute ago …”

“I kind of feel like when you’re the richest person in the world, people are going to be curious,” the second woman says, a little late on her defense. “It comes with the territory.”

“Yeah,” the first one chimes in. “It’s not like we’re being stalkers. It’s different when you’re famous.”

“Ah, true,” my fearless advocate sighs, a hint of sarcasm in her tone.

I lean closer to the door, just enough to catch a glimpse of her face – only to be met with the back of her head and the ice-blonde waves cascading over her shoulders. A pinstriped blouse is tied high on her waist and cuffed at her elbows, and a fitted skirt skims her hourglass curves.

She reminds me of one of those Old Hollywood pin-up girls my grandfather was obsessed with in his younger days. He kept a full file of photos in a desk drawer in his study, where my notoriously jealous grandmother would never see them.

I lean away before I’m spotted.

“My mistake, ladies,” the modern-day Marilyn Monroe says. “I must have forgotten rich people aren’t human. By all means, carry on.”

I glance at my timepiece and make a mental note to have my right-hand man and personal attorney, Broderick, check the cameras in the break room so I can get the names of the two Gossiping Gabbys. And I take a hint of pleasure in imagining them commiserating at some God-awful trendy neighborhood bar, drinking sugary cocktails that match the pink slips they’re about to receive.

I have zero tolerance for bullshit gossip—but I’ll make an exception if it’s flattering.

I have a business to run—biggest in the world, in fact. And I’ve had more than a few deals go south because of idiotic rumors.

The women’s conversation pivots to the topic of “keto friendly chocolate”, and I take that as my cue to leave. Only the instant I take a step past the open doorway is the same instant the curvy blonde in the pinstripe blouse exits the break room.

We collide in passing, but it’s a subtle collision.

My arm brushes hers just enough for a quick startle.

Palm splaying across her chest, she apologizes.

Our eyes lock, like she’s realizing who I am. This happens on a daily basis. For whatever reason, I intimidate the fuck out of people with my mere presence.

The woman sucks in a breath before going silent, recognition widening her eyes, and then she brushes a flaxen wave from her forehead, chewing the inner corner of the juiciest rose-colored mouth I’ve ever seen.

Funny how a moment ago she was so brave, standing up for a man she’d never met and now she’s a deer in the headlights. Doe-eyed and all.

“What’s your name?” I ask. A work badge hangs from her neck, but I can’t take my attention off her pleasing almond-shaped gaze with their spray of dark lashes and ocean-blue irises. A chorus of wild flowers, sun-dried cotton, and fresh air fills my lungs. She smells like a morning in the countryside, and for the briefest moment I’m transported to childhood summers at my grandparents’ country home in Surrey.

She swallows, straightens her shoulders, and tips her chin upwards. “Sophie Bristol.”

She doesn’t ask my name. I imagine she doesn’t need to.

“Thank you,” My gaze skims past her delicate shoulders toward the break room doorway, “for … that.”

Her full lips press and she offers a slight nod. “You’re welcome.”

“You told them I was vegan. But you should know, I’m very much a carnivore.” I give her a nuanced wink and earn a reserved smile from her pretty mouth in return.

With that, I’m gone.