Blackstone is at it again. We’re chasing down the cartel, but this time, the tables have been flipped on us.
Members of Team North Rock are being plucked off one by one. The race to understand what is happening can be the difference between life and death.
My position at Blackstone requires a clear head, and yet the stress and guilt I carry are affecting my concentration. But after what happened to my sister and the situation I’ve put my family in, I don’t deserve any sort of peace. My team doesn’t even know, and I choose to bear this burden alone.
Despite my constant internal struggle, I can’t help but notice her – Sloane Harlow. Falling for the lawyer who’s supposed to help us figure things out was never something I planned or expected.
With danger at every turn, things seem to only get worse. Missions fail, lives are in danger, and somehow, the cartel always seems to know our next move.
I can’t help but wonder…could there be a mole in the team?

EXCERPT
“John,” Daniel spoke up, “she’s only here for a bit, and for now she’s confined to here and town. We’ll get Davie or Dell to drive her around when she needs to come and go. Frank just wants her out of Washington for a while until the dust settles on the trial.”
“Why do I have the feeling there is more to this story than I’m being told?”
Frank smirked and hit my arm playfully. “Because there’s always more, son.”
I rolled my eyes, and Daniel chuckled.
“Be nice, John.” Savannah poked her head around the corner.
“I’m always nice.”
“You can be, but you also can be a bit cold too.”
I pointed at her, and Daniel shrugged like he agreed.
I wasn’t cold, I was quiet. People misunderstood that about me.
“Would you mind meeting with her tonight?” Frank jumped in. “She’s down at Tin House getting settled.”
“Yeah, okay. But I would be kinder,” I glared at Savi, “if you gave me something on her.” Frank closed his eyes before he spent the next three minutes giving a tiny rundown of who she was to him.
I headed outside and started to jog down the pathway. The cold wind made me hunch my shoulders. Winter was quickly taking over the crisp nights of autumn. We were warned this winter was going to be harsh, and nights like this proved it.
Once I got to the steps, I swallowed back the urge to turn and head back up to my peak and ignore the rest of the world. It was my little oasis and one no one could touch or take away from me.
The last twenty-four hours had been shit, and the idea of discussing it with some citified- privileged lawyer didn’t sound like a good time.
With a deep breath that felt cold in the lungs, I knocked on the door.
“Come in,” a muffled voice called.
I stepped inside to see a woman bent over a box. I closed the door, and when I turned back around, she was balancing a stack of files.
Wait?
I looked around, confused at who I was seeing.
“I’m here to see Sloane Harlow.” I jolted forward to grab the papers just as they began to slip off the top stack. Slipping my arms under hers, I took the stack and put them on the table.
“Thank you.” She pushed her hair off her face, and I couldn’t help but stare. Her indigo blue eyes latched on to mine. She was shorter than I was, and if she removed her heels, she’d probably only come up to my shoulder.
“Agent Black?”
“Yes, and you are?
“Sloane Harlow.”
“Son of a bitch,” flew from my lips. Fucking Mark.
“Are you calling my mother a bitch?”
“No.” My eyes popped out of my head at the realization that it sounded like I had insulted her.
She smirked playfully. “Good.”
“It’s just, Mark said you were…” I stopped myself again. Why was I talking out loud about this?
“I was what?”
“Just, ah,” I stumbled and felt like an ass. “Nothing. Sorry. He’s just a—”
“A son of a bitch,” she finished for me with a chuckle.
“Yeah,” I chuckled.
“Now that we have that cleared up, why don’t you take a seat?”
“Sounds good.”
Oh, yeah, that was a great first impression. Savi will have a field day with this. 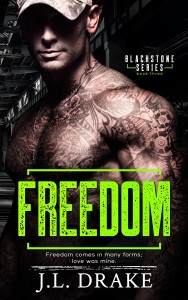 Author J.L. Drake was born and raised in Nova Scotia, Canada, later moving to Southern California where she lives with her husband and two children.
When she’s not writing she loves to spend time with her family, traveling or just enjoying a night at home. One thing you might notice in her books is her love for the four seasons. Growing up on the east coast of Canada the change in the seasons is in her blood and is often mentioned in her writing.
Her books can be found in different languages around the world. 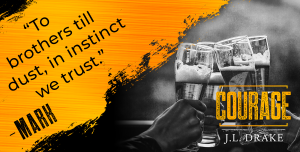