The Optional Aunt by Zoe Hill

She’s the older woman. He’s the man who killed her husband.
Rosalie Carmichael has spent most of her life doing as she’s told. She is the perfect wife, a loving mother, and the aunt everyone calls on when they need a favor.
Her life is peaceful until her happy family is torn apart and she finds herself at the mercy of the Coalition once again.
Scared and alone for the first time since she was sixteen, Rosalie seeks comfort in the arms of her much younger bodyguard. Together they dream of a future where they’re free to love each other out in the open without fear of recriminations or bloody repercussions.
And for six short months it seems as if escape might be possible.
Then the Coalition requests an urgent meeting, and Rosalie is left with an impossible choice.
Choose the bloodless—and loveless—option or follow her heart down the violent path to freedom?
The Optional Aunt is a dark and erotic romantic suspense novel set in a world where deception is the norm and the truth can’t be trusted. It is the second book in The Coalition Collection, a series of interconnected standalones featuring the Ingram-Greaves, Averell, Zidane, and Du Croix crime families.
*Full-length novel, complete with a HEA, and can be read as a standalone*
ADD TO GOODREADS 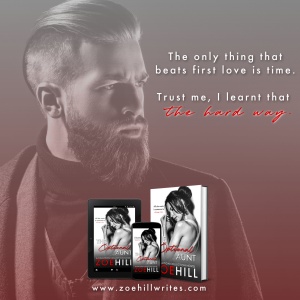 Zoe Hill is an Australian writer. Having found her niche spinning tales about love and villains, Zoe loves nothing better than typing all the words and consuming exorbitant amounts of coffee and Skittles while her teens are at school.

A country girl at heart, she is a rabid reader, a metal head, and UFC fanatic. When not writing, Zoe can be found chatting about plot bunnies with her menagerie of animals and musing out loud about how well she’s moonlighting as a competent wife and mother.

Zoe is active online and loves nothing better than chatting about books and memes. Feel free to friend her on Goodreads, check out her website zoehillwrites.com, or search Zoe Hill Writes to find her social media accounts.