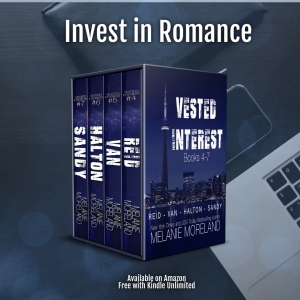 The USA Today bestselling series from Melanie Moreland is now a BOX SET! VESTED INTEREST BOX SET 2 by Melanie Moreland is now LIVE!! (Vested Interest Series – Books 4, 5, 6 & 7) Includes Bonus Content! #OneClick on Amazon: mybook.to/VestedInterestBox2 FREE to read on Kindle Unlimited Goodreads links: http://bit.ly/VIBoxSet2 The men and women you’ve come to love in Bentley, Aiden and Maddox now have their own stories. Reid: You’ve met the men of BAM. Now get to know the rebel. Who is Reid Matthews? A child, abandoned and unloved. A teen, adrift and disregarded, using his superior tech skills for the wrong intentions. A young adult, his future overshadowed by his prison record, his life an endless loop of loneliness. Until he is given a second chance and a new life emerges. A career he once thought he could only dream of, surrounded by people who show him that family and home aren’t simply words. And a girl who shows him the greatest, most complex code he could ever write. Love. Van: Vince Morrison, known to most people as Van. Good with his hands, be it crafting a piece of wood, playing his guitar, or pleasing a lover—he excels at them all. Friendly, flirty, and talented, he’s cool under pressure, and hot everywhere else. But he keeps his heart closed, even as his interest and emotions are tested. Olivia Rourke works alongside him at BAM. Talented, private, and intriguing, she touches something inside him he can’t deny. He wants to know her. In every possible way. He wants her to know him. Her past tells her to stay clear. Van is everything that she wants, and exactly what she cannot have. She has someone else to think of who is more important. Can either of them risk their hearts? Halton: When love turns to hate—that’s where I come in. I’m Halton Andrew Smithers, attorney. Hal to my clients and friends. Messy divorces, deadbeat dads, runaway wives, cheating partners—I handle them all. I know the seedy side of love, and it isn’t pretty. I avoid emotional attachments—I’ve seen all too often when hot passion turns to frozen tundra. I satisfy myself with helping people behind the scenes. It gives me a sense of satisfaction that completes my life. Until she enters it and everything I believe is turned upside down. She fills a void I never knew existed, and I know without her, my life will never be the same again. For the first time, I want to try. For her. But am I strong enough? Sandy: Behind every successful man there is a woman. What happens when you’re the woman behind an entire team? The final book in the USA Today best selling Vested Interest series. Sandy Preston has been den mother, friend, confidante, and the guiding force behind the men of BAM for years. Now they have new lives, and hers has drastically changed. Can she move on and find love a second time around? Will the men she considers family accept the changes? #BAM #VestedInterest #InvestInRomance #YourNextBookBoyfriend #MelanieMoreland #BoxSet #MustRead #Live #AvailableNow