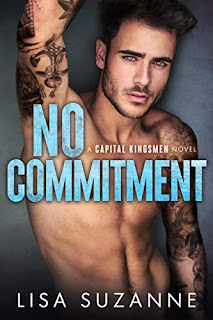 NO COMMITMENT by Lisa Suzanne is LIVE!

No commitment. That was my deal with Tyler from the start, at least until his tour was over and we could be together. But thirty days filming a reality show here, two years overseas with his band there… Is it really any wonder why I didn’t tell him about the baby?

He comes looking for me once he’s back in the country, but he runs into the man I married instead. Eventually I agree to meet him so I can put the past truly behind me. When I see him, though, every feeling I held inside comes rushing back.

My husband and I vowed to raise this baby together. But as I find myself drifting away from the husband who stole my job and gravitating toward the rock star who stole my heart, I realize he deserves the truth.

I just have no idea how this rock star who doesn’t make commitments is going to react to the fact that he’s a father.