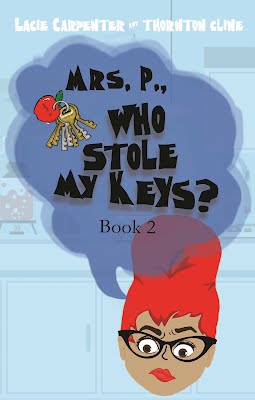 Mrs. P. and her students return to school from their holiday break only to find more pranksters on the loose in her classroom. Mrs. P. is pranked with a hologram of Snow White and the Seven Dwarfs, the Ghost of Avery Middle School and with the mother of them all–her keys mysteriously disappear for weeks. Ella, Lennox, Stella and Austin team up to investigate and uncover the identity of the secret prankster who is constantly disrupting Mrs. P.’s class.

“What a sham,” Stella whispered to Lennox, Austin, and Emma.

“Are we the only ones who know the truth?” Emma whispered.

“Preston, Tristan, and Mason know, but I guess the other classmates think he hung the moon,” Austin said.

“And now’s not the time to tell them,” Stella whispered back.

Principal Abbott placed a lanyard gold medal and held a large cardboard check in his hands. He began to speak as the cameras rolled, and the microphones were shoved into Kelile and Mr. Abbott’s faces.

“Kelile Anderson, you are a hero in everyone’s eyes. Your invention of a portable digital scanning device to analyze blood samples inside the arteries and detect cancer in the body has caught the Intel Foundation’s attention. You have made a significant breakthrough discovery to help in the fight against cancer and to save lives. I present to you today this gold medal and a check for $50,000 for winning the top prize of the Intel Foundation Young Scientists Award,” Principal Abbott said.

Everyone in the auditorium stood and cheered with thunderous applause. Kelile’s face beamed with pride and accomplishment. Even if half the school knew Kelile was the anonymous prankster and did all the pranks he was accused of; it didn’t matter now. He was the celebrated hero, who canceled out everything he ever did to Mrs. P. and the students. Principal Abbott handed Kelile a microphone to say a few words.

“Thank you for this special recognition. I am humbled and honored to receive this award today. Thank you, the Intel Foundation, for seeing the potential in me. Thank you, Principal Abbott, students, and teachers for putting up with all my geeky and crazy ways. I especially wish to thank Mrs. P. and my parents.”

“Yes, but in a strange, vague sort of way,” Lennox replied.

After the awards ceremony, several reporters asked for photographs of Kelile with his science teacher, Mrs. P.. She obliged and smiled proudly with her arms around Kelile even though Mrs. P. knew in her heart of hearts that Kelile was the prankster who annoyed her during the semester with crazy pranks.

When the reporters had finished their photos, Mrs. P. threw her arms around Kelile to congratulate him.

Mrs. P. paused for a second and looked at Kelile as if she knew he was the culprit who stole her keys.

At that very moment, Kelile knew she knew, but Mrs. P. was the kind of teacher that would forgive and look past his mistakes. Kelile had a feeling he and Mrs. P. would get along just fine in the near future.

With a love for music, literature, and the obscure-Lacie Carpenter finds joy and solace in writing. With three degrees, working on two more, and several Fiddler of the Year awards; her passions lie in music and writing. Her performances and writing reflect her zest for excitement and intrigue. She is a published author with Hal Leonard and INtense Publishing. Carpenter is a music specialist, psychology professor, avid YouTuber, Vlogger, and has a love for baking and travelling. An award-winning fiddler, multi-instrumentalist, and singer/songwriter, Lacie enjoys passing on her knowledge to others. She has spoken on and moderated many panels at conventions such as NAMM and Music Cities Convention in Chengdu, China. She calls Nashville, TN her home and is grateful to be able to live out her dreams as an artist.

Ever since his mother signed him up for piano lessons at age five, Thornton Cline has been writing non-stop. With over 1,000 published songs, 150 recorded songs, 32 traditionally published adult, children’s and YA books published, Thornton Cline has been nominated multiple times for Grammy and Dove Awards. In 2017, Cline won a first-place Maxy Literary Award for “Best Children’s Young Adult Book”. Thornton Cline’s books have appeared at the top of the Amazon bestselling charts. Cline has been honored with “Songwriter of the Year” twice-in-a row and has received a platinum award for certified sales of over one million units in Europe.

Cline continues to mentor, speak, teach, and inspire aspiring authors and songwriters around the world. He resides in Hendersonville, Tennessee with his wife, Audrey and their cat, Kiki.. You can follow all the latest updates on his books and songs at his website, ThorntonCline.com; Thornton Douglas Cline on Facebook, @ClineThornton on Twitter, and @ThorntonCline on Instagram. Mrs P: Who Stole My Keys is Cline’s second book of the Mrs. P. series on INtense.