Of Wicked Blood by Olivia Wildenstein and Katie Hayoz 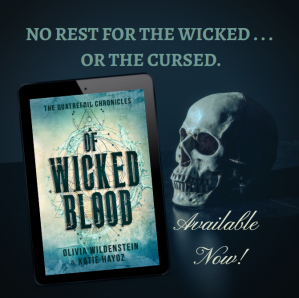 💥AVAILABLE NOW with special release week’s price $2.99!!!💥OF WICKED BLOOD by Olivia Wildenstein and Katie Hayoz
An Upper YA Paranormal Romance series with magic, mystery, adventure, and a slow-burn romance, lots of cursing, and not just the magical kind…
TITLE: Of Wicked Blood
SERIES: The Quatrefoil Chronicles book 1
AUTHORS: @olives21 and @katie_hayoz
GENRE: Upper YA Paranormal Romance
BLURB
NO REST FOR THE WICKED . . . OR THE CURSED.
SLATE
I didn’t mean to steal the Bloodstone from the De Morel’s crypt.
Scratch that, I did mean to steal it.
Until I realized it was a curse-magnet that only comes off if I, along with a jolly trio, successfully defeat four curses.
If any of us fail, I’m dead.
I’ve never been a glass half-empty sort of person, but my glass looks in dire need of a refill right about now.
The only highlight of this wicked treasure hunt: feisty, entitled Cadence de Morel.
CADENCE
I was raised on tales of magic, in a small town reputed to be the birthplace of French witchcraft.
Did I believe all the stories I heard? Absolutely not. I mean, if magic existed, Maman wouldn’t have died, and Papa wouldn’t be stuck in a wheelchair, right?
Wrong.
The night Slate Ardoin waltzes into my life, wearing a ring he stole from my mother’s grave, I call him a monster.
But then I meet real ones, and Slate, well . . . he becomes something else to me.
Something frustrating to live with but impossible to live without.
Something I will fight for, no matter the cost.
**Warning: contains profuse cursing (and not just the magical kind).
—
GET IT NOW: https://www.amazon.com/dp/B08SJ1LKPL
ADD IT TO YOUR GOODREADS: https://www.goodreads.com/book/show/48915669-of-wicked-blood
CHECK OUT THIS AMAZING BOOK TRAILER: http://oliviawildenstein.com/the-quatrefoil-chronicles/
#Bookbloggers and #Bookstagrammers SIGN-UP for #BookBlitz (February 22-26) and/or #BookTour (March 22-26): https://forms.gle/GgnvSaGDNfaCwjpT7
—
#OfWickedBlood #TheQuatrefoilChronicles #OliviaWildenstein #KatieHayoz #MagicPenBookTours @magicpenbooktours #NewRelease #AvailableNow #PNR #ParanormalRomance #UrbanFantasy #matureyoungadult #bookstagram #romancereadersofinstagram #instareads #igreads #bookaddiction #BookCommunity #bookaholic #witchyromance #paranormalromancenovels #witchcraftbooks