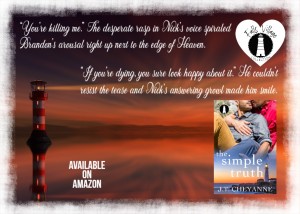 The Simple Truth by J.T. Cheyanne

Falls Village. A place to be free, to be out and proud, and to live the life he’d dreamed about for himself. Brandon Martinez had everything he wanted in the palm of his hand. The new car detail/specialty shop he co-owned was starting to make money. The ocean sprawled in all of its glory only a few miles from the new condo. And best of all, he had Nick, his fiancé and business partner at his side.

Born into old money and blessed with the stunning looks of his Ojibwe ancestors, Nick Wilson embodied the definition of the perfect fiancé. Brandon could never quite believe Nick belonged to him, had proposed to him, the Latino son of an Air Force colonel.

One thing stood between them and their happily ever after. An electric moment of panic and one epic omission that could bring it all down around their ears. For their first few months in Falls Village, Brandon shoved it to the back of his mind. The shop and Nick kept him busy. But, he had to tell Nick, and soon. Nick was talking an actual wedding date and building a home in the Port Dock area of Falls Village. He was trying to give Brandon the permanency and stability he craved.

One phone call and the time Brandon thought he had, vanished. Would Falls Village continue to be Brandon’s safe haven, or would it become his new personal Hell?

Something flickered in his father’s eyes, but before Brandon could decipher it, a knock sounded on the door. His stomach chased his heart into his throat. He was going to throw up. Nope, faint first, the room was suddenly spinning.

“Should I get that?”

Brandon swallowed the nausea and shook his head more for his benefit than in response to his father.

At the door, he took a deep breath and twisted the knob. Nick stood on the small porch, his smooth skin glowing in the fading sunlight. His hair was loose, falling in an ebony sheet down his back. The cobalt

Memories flared between them. The house blessing the day before they moved into the condo. The next day, Nick swinging him into his arms and carrying him over the very threshold where they stood. The mad rush for the bedroom.

Hunger for the man in front of him kicked aside the nausea and dizziness. He saw an answering flare in Nick’s eyes. He’d never know who moved first, only that mouth met mouth. Nick’s arm went around his waist drawing him out of the house and up against his chest. Brandon wanted to crawl up him, but satisfied himself with wrapping his arms around Nick’s neck and pressing closer.

“Bran? Is that Nick?” His dad’s voice separated them as effectively as Moses parted the Red Sea. Brandon stumbled back, a hand rising to his mouth. Nick’s eyes were dark, his expression closed and stoic. Every inch the warrior of old. Brandon wanted to drag him straight into the bedroom, but that wasn’t an option.

“Yes, Dad.” Brandon stepped back and had to clear his throat when his voice cracked.

To Nick. “Come in. Mom’s just finishing up. Dad’s in the living room.” He reached for the wine bottle in Nick’s left hand. How had he not noticed that before?

“You need to go home,” he said to the man sprawled on the other side of the mattress. It took every ounce of will power he had to utter those words. New fissures of pain cracked in a heart already bruised and battered. Brandon snorted. Nick felt the mattress move and tensed. On his knees at Nick’s back, Brandon wrapped his arms around Nick’s shoulders. Soft warm lips pressed against Nick’s shoulders.

“I can leave and get home before my parents wake up.”

Nick stood up forcing Brandon’s arms to fall away. He turned and met Brandon’s drowsy gaze. Very slowly, he shook his head. The sleepy contentment in Brandon’s eyes swirled with agitation and then dissipated. Slowly, almost gingerly, Brandon shifted away from him.

“You’re serious?” Brandon backed further across the mattress. He sat near the opposite edge and shoved shaky fingers of one hand through his curly dark hair. Naked fear strained his features. Nick circled the bed and sat on the edge. He caught Brandon’s free hand.

“I am serious, but it doesn’t mean what you think. I love you, more than ever. Look at me.” Nick linked their fingers and tugged until Brandon met his stare.

“I can’t lie to your parents, Brandon. If they ask me where you were, if they ask me questions about us; I can’t lie. I refuse to diminish what we have by denying it.”

Brandon shot to his feet. “You think that’s what I’m doing?” he accused.

“You might as well have.” Brandon shoved past him and stalked out of the room. Nick followed him into the kitchen where he angrily snatched clothes off of the floor. He wanted to apologize, to ease the confusion and hurt so evident on Brandon’s face.

“You don’t understand,” Brandon shot out at him. “Mom and Dad are devout Catholics and Latino. Homosexuality has made strides in both communities but still isn’t easily accepted. We don’t have Two-Spirits who are celebrated for who they are.”

“I know.” Nick’s response went unheeded and he expected no less. The argument wasn’t new territory for them. Despite rearing its ugly head every few months, the hurt and anger never diminished.

Contrarily, it grew worse with each re-hash.

For the most part, Nick understood Brandon’s insecurities and worries. Hate crimes against the LGBTQ peppered the news. Friends told horror stories of attacks and insults from childhood through adulthood. Brandon didn’t want to be a statistic, just one more gay man abandoned by his family.

Nick fought the urge to change his mind. “Be careful going home.”

Brandon stopped halfway out the door and looked back. His shoulders sagged. “It’s not home because you aren’t there. I shouldn’t have asked you to leave.”

“Would have been awkward explaining the sleeping arrangements.”

“Not as awkward as this is.” And, he was gone, the door clicking closed at his back.

I live in the beautiful state of Alabama. I have two sons, a daughter, and four amazing grandchildren! I have been an avid reader since fourth grade, and started writing my own stories in 2011. I have one contemporary romance with Decadent Publishing and several independently published LGBT romance books in both contemporary and paranormal genres. I have numerous works in progress and all of the “voices” are vying for their time in the spotlight!

I LOVE LOVE LOVE Sebastian Stan; I’ll watch anything featuring him. I’m a huge Avengers/Marvel fan. They have Bucky! I adore Stitch and love listening to the Jonas Brothers. I’m currently hanging out in front of the TV on Monday nights for my 9-1-1 and 9-1-1 Lonestar fix and impatiently waiting for Lucifer on Netflix. So, those are a few of my favorite things.