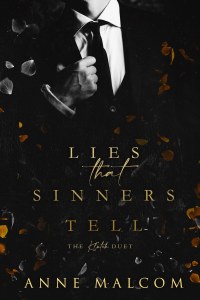 Darkness asked her to dance.

It started with a cold stare.
An arrangement.
A deal with a devil in a bespoke suit.
He was wicked. Cruel. No sane person would fall in love with him.
But sanity abandoned her the second she agreed to be his.

She chose to take his hand.

It started with a white dress.
With ocean eyes.
With a woman he had to have, even though he had no business touching her porcelain skin.
She was never meant to enter his world.
He dragged her in anyway.
It was meant to be about his twisted, selfish desires.
She gave him a glimpse of the man he could’ve been had the world not turned him into a monster.

He led her into the abyss.

There, in the darkness, she learned wicked things.
He knew he’d ruin her life, loving her. So he lied. Like the sinner he was, he broke her gentle, precious heart.
Like only a devil could.

But the dance had to end. 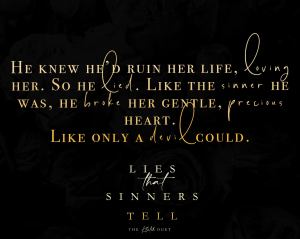 Anne Malcom has been an avid reader since before she can remember, her mother responsible for her book addiction. It started with magical journeys into the world of Hogwarts and Middle Earth, then as she grew up her reading tastes grew with her. Her obsession with books and romance novels in particular gave Anne the opportunity to find another passion, writing. Finding writing about alpha males and happily ever afters more fun than reading about them, Anne is not about to stop any time soon.

← Bride of the Emperor by Hayley Faiman
Taking a chance for love: An MM Romance Novel →