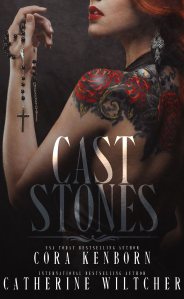 My past is a poisoned prayer…
Whispered to me by a devil with an angel’s smile.
Twelve years ago, he stole me from the streets…
Only to leave me stranded in a nightmare.
But Luca Esposito isn’t just a painful memory.
He’s a front-page headline—an accused killer.
And I’m the public defender who set him free.
Once again, I’m trapped in his web with blood on my hands.
But I didn’t crawl out of the fire to be tossed into an inferno.
There’s a new nightmare coming.
And this time we’ll be stranded together.
They cast the first stone.
We’ll cast the last.
My Heaven. His Hell.
Our final sin.
Trigger Warning:
Cast Stones is an extremely dark and taboo romance novella with multiple triggers. This book is not for the faint of heart or easily offended. Remember, you have been warned.
This novella was originally published as part of the Possessed By Passion Boxset. 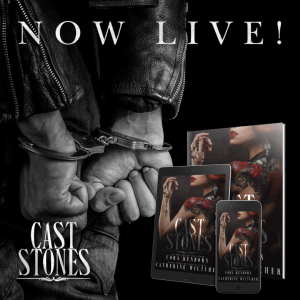 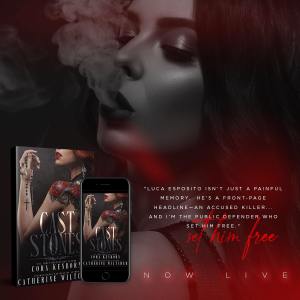 EXCERPT
Life is the great leveler.
One minute I’m flying high, and the next I’m nosediving straight to the bottom, staring right into a pair of devil-black eyes I assumed were gone forever.
“Luca,” I gasp out.
“What the hell are you doing with that man?”
I wrestle out of his hold, which is a joke. He’s six foot four inches of solid muscle. Without his prison chains on, he could pin me against the wall, and I’d be a rag doll in his hands.
I grit my teeth as explosive memories threaten to overpower me. Spinning around, I shove my palm against his chest and stumble backward on my heels. “We’re toxic, Luca. We’re every torn-out page of wrong.” Hot tears blind my vision. “As far as I’m concerned, you died ten years ago. You need to leave right now or—”
“Or what, cara mia?” he murmurs.
“I’ll be making a call to Detective Hunter to let her know you’re back in town.”
I hope the words sound as bitter as they taste. I hope that hearing them cuts him with the same jagged knife that’s lodged in my chest just from looking at him.
He shakes his head slowly at my outburst. “I’m not going anywhere, Madi. You’ve been a bad girl, and I’m done waiting for you to remember all the reasons why.”
Another step back and my shoulders slam into the wall. “I’m not a bad girl anymore, Luca, I’m a free girl,” I counter weakly. “And trust me, I remember plenty.”
“Not everything. Not yet.” Luca wastes no time closing the distance between us, capturing my chin between his fingers, his forearm pressed hard against my chest. “And you’re not free, Madi. Not even close. You throw that word around like it’s a right instead of a gift.” I try to pull away from him, but he tightens his hold, brushing his lips against my ear. “What did I always tell you?”
I want to fight him, but my limbs are numb. Having him this close forces me back to that cabin in the woods again. To a time that was just us—spinning the bad into hope, and our desperation into survival. “That you’d never lie to me,” I whisper, the words sounding as obscene to me as their truth.
His thumb strokes my lips, setting my whole body aflame. “What else?”
“But you’d hurt me if you had to.” 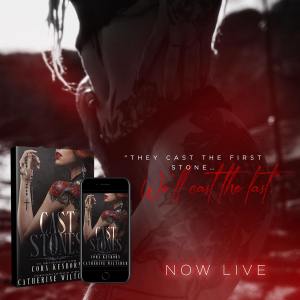 Cora Kenborn is a USA Today Bestselling author who writes in multiple genres from dark and gritty romantic suspense to laugh-out-loud romantic comedy. Known for her sharp banter and shocking blindsides, Cora pushes her characters and readers out of their comfort zones and onto an emotional roller coaster before delivering a twisted happily ever after.
Cora believes there’s nothing better than a feisty heroine who keeps her alpha on his toes, and she draws inspiration from the strong country women who raised her. However, since the domestic Southern Belle gene seems to have skipped a generation, she spends any free time convincing her family that microwaving Hot Pockets counts as cooking dinner.
Oh, and autocorrect thinks she’s obsessed with ducks.
WEBSITE
NEWSLETTER
AMAZON
BOOKBUB
FACEBOOK
FACEBOOK GROUP
TWITTER
INSTAGRAM
CATHERINE WILTCHER

Catherine Wiltcher is an international bestselling author of twelve dark romance novels, including the Santiago Trilogy. A self-confessed alpha addict, she writes flawed characters who always fall hard and deep for one another. She lives in the UK with her husband and two young daughters. If she ever found herself stranded on a desert island, she’d like a large pink gin to keep her company… Cillian Murphy wouldn’t be a bad shout either. Sign up to her newsletter for book updates and exclusives! www.catherinewiltcher.com/newsletter
WEBSITE
FACEBOOK
FACEBOOK GROUP
GOODREADS
TWITTER
INSTAGRAM
BOOKBUB 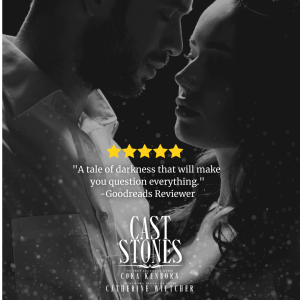