Until Retribution Burns by Adelaide Forrest 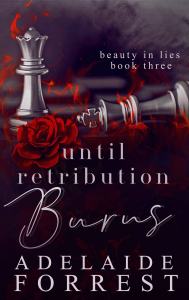 Rafael
Our love was born in lies.
Mi reina captivated me. She burned me and claimed me as hers. I thought I’d be the one to own her, but there is no mistaking her claim on my soul.
When our lives burn to ash around us, our love will be strong enough to withstand the flames. Because the alternative is losing someone I won’t ever let go.
My wife.
Isa
Our love was born in blood.
El Diablo deceived me. He took me and marked me as his. He desecrated my soul, turning me into a nightmare to match the sins staining his own.
With the flames of our pasts consuming everything around us, our love is our only chance to find salvation. But his search for answers may come at a price I’m not willing to pay.
My love.
Until Retribution Burns is the third of four books in the Beauty in Lies trilogy and ends on a cliffhanger. This is a DARK mafia romance and contains graphic violence, mature content, and elements that may be triggering. Please read at your own discretion. 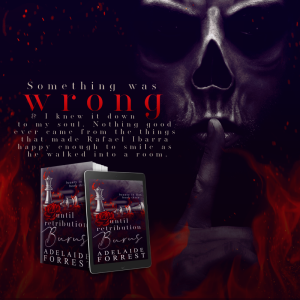 EXCERPT
My arms pumped with the desperation consuming me. A glance over my shoulder as I threw open the French door showed Rafael brutally shoving his cousin to the side to get past him. The breath froze in my lungs as I moved, my chest unnaturally tight as I ran.
The view of the shed up ahead in the distance served as a cruel reminder of all the ways Rafe had ruined me.
He’d taken an innocent girl who’d survived his father’s wrath and done what he’d failed to do. He killed her—turned her into a phantom of his own making.
A murderer.
Even wanting nothing to do with that shed and the recent memory that threatened to slow me down, I turned my back on the docks and sprinted in its direction up the driveway. Closer to civilization and escape, even knowing in my heart that the flight was pointless.
I stumbled, my heel tilting to the side as I traversed the slight incline with ragged breaths. The roll of my ankle shot pain up my leg, a whimper escaping my throat as I looked behind me. Rafael was quickly closing the distance between us, his face twisted into a murderous expression as he ate up the head start his cousin’s interference had provided me.
“Isa, stop,” he ordered, his low and impossible quiet voice traveling through the air. The sound shouldn’t have reached me, but something in that command felt like I would hear it anywhere. No matter where in the world I was, no matter where he was, the instinctive desire to submit to his will overwhelmed me.
Only the panic coursing through my veins drove me to keep moving, to stumble along the path with the limp from my sprained ankle. Even knowing it was futile and that Rafael would always catch me and drag me back to the pits of Hell with him, I kept going.
That feeling settled down my spine, the slow caress of a nightmare whispering along my skin when he came close enough to almost grab me.
One more step, and I could already feel the heat of his arms reaching to wrap around me in the next moment. The harshness of his grip as it would lift me off my feet.
I ducked, dropping to the ground and crab walking backwards on my hands as the devil himself loomed over me. Even in the moment with his expression calm and placating, cautious, as if I were a wounded animal he only wanted to help, that darkness lurked in his stunning gaze. The animalistic tilt of his head as he studied the prey he’d well and truly caught once again left little doubt as to just what kind of punishment he would deliver as soon as he pulled me into his evil embrace.
A shadow emerged from the other side of the driveway, a figure moving between us as if he didn’t fear death itself. Joaquin stepped over my body, positioning himself so that one foot was to either side of my thighs. “Get up, mi reina,” he said softly, glancing over his shoulder at where I panted on the ground beneath him. 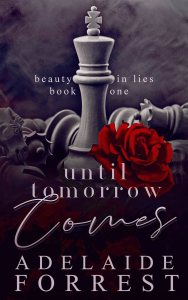 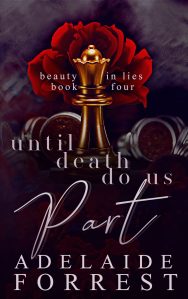 Adelaide fell in love with books at a young age and quickly discovered her love for writing soon after. Since then, she’s become a self-professed plot hoarder of over 300 book concepts.
After receiving her degree in Psychology, Adelaide went on to work in a therapeutic riding facility. When her daughter was born, Adelaide traded out her boots to be a stay-at-home mom. In 2019, she added author to those job duties after a lifetime of dreaming about it.
She lives in New York with her husband, two children, and their dog and cat who all make up the center of her world.

← Sex on the Seats by Elise Faber
Dillon: A Wings of Diablo MC Novel →