I am so excited that EREBUS DAWNING by A.J. Super is available now and that I get to share the news!

This blitz also includes a giveaway for a $10 Amazon GC courtesy of AJ & Rockstar Book Tours. So if you’d like a chance to win, check out the giveaway info below. 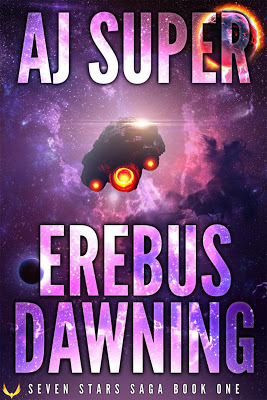 Read for FREE with a Kindle Unlimited Membership!

“Those who can destroy a world can control the universe.”

Everyone wants the Star of Erebus. Space-pirate Nyx Marcus is no exception. With it, she can prove to her father that she is worthy of his legacy. But she’s come up empty-handed aboard the space-ship Thanatos and now Malcam, her father’s First Officer, is mutinying. As Nyx flees with a loyal skeleton crew, she discovers that the planet-killing weapon, named after one of the seven gods, is more than what it seems. Erebus isn’t a simple weapon, but an ancient AI and a technological god.

With the oppressive Queen of the Protectorate and new pirate captain Malcam searching for the Thanatos and Erebus, the AI god has more surprises for Nyx. Waking dormant AI code in Nyx’s blood, Erebus reveals they are family and Nyx is the head of the Seven Stars pantheon. But while Nyx’s only choice is to protect Erebus, she wants no part of her AI responsibilities. Now Nyx must learn to control her power without sacrificing her own humanity or give her enemies a new way to oppress the known universe and lose the family she holds dear.

Nyx hovered near the closed door to the command deck of the Thanatos. The slight increase in gravity pulled her down. Malcam and Kai hadn’t followed her—yet. C’est bon. She gripped the door frame with her fingertips as she swung her feet to the floor. No use falling through the sliding hatch and onto her face as the gravity shifted from the corridor’s low gees to whatever level was present on the bridge.

She floated inches above the ground, heart racing. Sneaking away from the main boarding party to get here was still a dereliction of duty. All so she could prove to her father that she was the legacy of his ship, the Medusa, and the rightful new captain.

“Come on, connard,” she swore in Queen’s Speech. “Work.” Her heartbeat accelerated more. It wouldn’t be long before someone noticed she had abandoned her post taking command of Engineering with the boarding party. Her job was to control the ship from there. But if she wanted to deliver her father’s obsession to him, she needed to be on the command deck. If she didn’t, there would be consequences.

Fingers shaking, Nyx yanked an electrical panel next to the pad off the wall, exposing a tangle of wires. A spray of sparks showered her long hair, but she quickly brushed them aside. An arc of blue shocked her fingertips as she disengaged the lock on the door. “Putain,” she swore again. Nyx shook the tingling from her quivering fingers. Acrid smoke poured from the open panel, and the blackened air burned her throat.

She bit her lip, placing her hand on the pad by the hatch. She knew what she would walk into. The Medusa’s Communications Officer had hacked and reprogrammed the Thanatos’ Ship Interface Android—Sia, for short—to run the ship into the edge of a singularity and forcibly take over the bridge while the crew was working to get off the edge of the black hole. The deck would be a bloodbath. The Medusa’s CO would have programmed Sia to leave only Captain Leo Matthews alive, since he knew where the planet-killing weapon, the Star of Erebus, was. Where her father’s obsession was.

The door whooshed open, and Nyx stumble-stepped onto the second level of the amphitheater-style deck and stared. Her gut flipped as she regained normal gravity.

Bodies were slumped over their workstations or crumpled onto the floor. The crew lay in puddles of blood, some still with weapons drawn. She exhaled heavily and furrowed her brow, leaning on the hatch-frame. Everyone was dead.

Angela Super earned two Bachelors’ degrees from the University of Idaho in the Creative Writing and Theater programs. She has been an author since she was old enough to write (and illustrate) a stapled-together ABC book, which she still has packed away in a box of childhood memorabilia. Currently, she lives in Kansas with her husband who is a High School Graphic Arts Teacher and two fuzz-brained kittiots. She loves to make costumes, cosplay, and occasionally she plays D&D or MTG with teacher-friends during summer vacation.

Angela is inspired by Ursula K. LeGuin’s The Dispossessed and her two feisty grandmas, and she devours sci-fi and fantasy in every medium. She is an active member of the Twitter writing community, and also works with several amazing writing groups, frequently getting to read and critique wonderful unpublished work.