What is your desire?

I am the man who can make every dream come true, for a price.
Years ago, a fight for supremacy took place between the two most powerful families in New Orleans. The battle was set in the metaphoric octagon, with the spotlight blazing. The city sat in paralyzed fear, awaiting word of a victor.
Abraham Ramses versus Isaiah Boudreau.
One man would emerge victorious and rule the city of sin.
Neither understood that the devil was in the details.
Neither lived to see the rising sun.
I’m Everett Ramses, son of Abraham, and I am the devil.
I took my rightful place as king of New Orleans.
Now, my realm is threatened by a man with false claims to the Boudreau family.
I know what I must have to secure my empire—who I must have.
The rightful daughter of Isaiah Boudreau, Emma North, must be my wife. Together we will reign stronger than ever before. But first, she must take the devil’s deal.
*DEVIL’S DEAL is a full-length novel that begins with the prequel FATE’S DEMAND previously titled The Deal.
Grab Your Copy Here:
Amazon US | Amazon UK | Amazon AU | Amazon CA | Apple | Nook | Kobo
Have you been Aleatha’d? 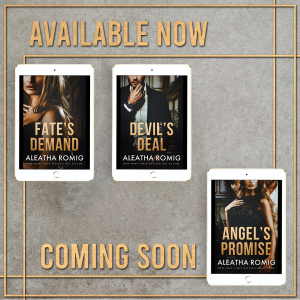 Aleatha Romig is a New York Times, Wall Street Journal, and USA Today bestselling author who lives in Indiana, USA. She grew up in Mishawaka, graduated from Indiana University, and is currently living south of Indianapolis. Aleatha has raised three children with her high school sweetheart and husband of over thirty years. Before she became a full-time author, she worked days as a dental hygienist and spent her nights writing. Now, when she’s not imagining mind-blowing twists and turns, she likes to spend her time a with her family and friends. Her other pastimes include reading and creating heroes/anti-heroes who haunt your dreams and bring your imagination to life!
Aleatha released her first novel, CONSEQUENCES, in August of 2011. CONSEQUENCES became a bestselling series with five novels and two companions released from 2011 through 2015. The compelling and epic story of Anthony and Claire Rawlings has graced more than half a million e-readers. Aleatha released the first of her series TALES FROM THE DARK SIDE, INSIDIOUS, in the fall of 2014. These stand alone thrillers continue Aleatha’s twisted style with an increase in heat.
In the fall of 2015, Aleatha moved head first into the world of dark romantic suspense with the release of BETRAYAL, the first of her five novel INFIDELITY series that has taken the reading world by storm. She also began her traditional publishing career with Thomas and Mercer. Her books INTO THE LIGHT and AWAY FROM THE DARK were published through this mystery/thriller publisher in 2016.
In the spring of 2017, Aleatha released her first stand-alone, fun, and sexy romantic comedy with PLUS ONE, followed by the sweet stand-alone, ONE NIGHT.
Aleatha is a “Published Author’s Network” member of the Romance Writers of America and PEN America. She is represented by Kevan Lyon of Marsal Lyon Literary Agency.
Get Aleatha’d Here:
Newsletter | Website | Facebook | Amazon Author Page | Goodreads | Instagram | Twitter | Pinterest