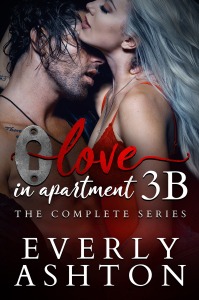 When three friends find a series of letters detailing an urban myth about how the apartment they live in is the catalyst for its inhabitants to find true love, they compare it to finding fool’s gold, not taking the words seriously. Until one by one they’re each taken down by Cupid’s arrow.
Included in this box set:
Hit or Miss – A hot doctor, opposites attract, older man romantic comedy
Three’s a Crowd – A best friend’s older brother, roommate, enemies to lover’s romantic comedy
Good on Paper – an enemies-to-lovers, office/hidden relationship romantic comedy
The Love in Apartment 3B series is a collection of steamy, lighthearted, heartwarming romantic comedies with a happy endings and a cast of hilarious characters that will have you laughing out loud until the last page. No cheating. Buy or borrow this book for free with Kindle Unlimited!

Everly Ashton is a USA Today Bestselling Author who wanted to try something a little different under a new name. She loves brooding heroes, spunky heroines, and happily ever afters. You can usually find her with a Kindle in one hand and a cup of caffeine in the other. And because she’s using a pseudonym she can’t tell you much more than that. 😉
Connect with Everly Ashton
Website | Facebook | Instagram | Goodreads | Facebook Reader Group
Hosted By