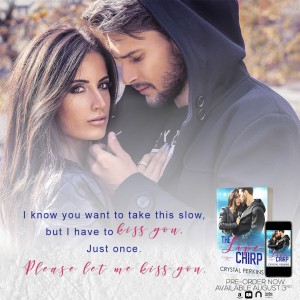 The Love Chirp by Crystal Perkins is releasing August 3, 2021!

Neal “Rock” Roquemore earned his bad boy image with fights on the ice, and indifference to relationships off of it. When he’s traded to the new hockey team in Seattle, he’s not happy to be back in his hometown. He’s even less happy when a recording of him criticizing elements of the new practice facility goes viral. Especially when he finds out the architect is the only woman he’s ever loved…and walked away from.

Sarai Redlin watched the love of her teenage life walk away from her ten years ago, and she’s never forgotten the pain he caused her. Now, when she’s finally achieving her professional dream, Neal’s back and ruining everything for her again. This time, she’s older and wiser, and she’s not going to fall for him again…and there’s no way she’s going to undo all her hard work just because he doesn’t like it.

With the media and fans rallying against Sarai, Rock has no choice but to work out a compromise with her for the building design and amenities. A week on the island they both love might change everything for them again, but reality will eventually hit them hard once they’re back in Seattle. Can their love survive this time, or will they have to learn to live apart once and for all?

← Cruel Dynasty
The Secret We Keep →