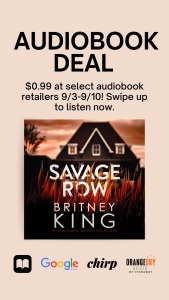 SAVAGE ROW by Britney King is 99¢ until 9/10 on select audiobook retailers! Grab it now!

The international best-selling author of Her and The Social Affair returns with another suspenseful thriller that very well could be set in the house next door.

Jack Mooney, a career criminal, has been in prison for nearly a decade, quietly nursing his hatred for the jurors who put him there. One in particular gets him through the endless days – the alluring Amy Stone.

When Mooney is granted early release, he makes Amy his first priority. To his delight, she’s even more enticing than before, and better still, she has a lot more to lose than he’d imagined.

As Mooney’s campaign of terror mounts, the police seem powerless to protect the Stone family, who must rely on their wits to survive a psychopath hell-bent on revenge.

← An Insatiable Eventide
Hijacked by Lucy Lennox & May Archer →