Chances Inlet is the home of second chances. Too bad not everyone wants one. Not even for Christmas . . .
Chances Inlet, North Carolina is the last place major leaguer Ryan McAlister wants to hide from the media to rest up his broken hand. He left his gossipy, Christmas-obsessed hometown in the dust over a decade ago. When he gets caught up in the town’s holiday antics, he finds himself responsible for making a little boy’s Christmas wish come true. The kid’s widowed mother, however—a blast from Ryan’s past—just might make his stay a bit more exciting.
Physical therapist Jane Sheffield loves her hometown. Especially at Christmastime. Since this may be her last in Chances Inlet, she’s determined to make the most of it with her young son. But after her childcare falls apart, she gets more than she bargained for when her best friend’s younger brother volunteers to help out. The rebellious teen she tutored in high school has grown up into a sexy charmer and so much more than the pretty face he pretends to be.
Can a stray dog, the Ghost of Christmas past, and a host of meddling townsfolk muster up enough Christmas spirit to convince Ryan and Jane to give their hometown—and each other–a second chance?
This book is the third book in a family saga but can be read as a standalone.
Chances Inlet Series:
Book 1: Back to Before
Book 2: All They Ever Wanted
Book 3: Second Chance Christmas
ADD TO GOODREADS

EXCERPT
“YOU PROMISED MY son a puppy?”
Ryan whipped his head around to see Jane headed in his direction. Make that a very pissed off Jane. The expression on her face was nothing like the one she’d been bewitching him with a few moments ago. Hell, she’d looked so fresh and alluring when he’d had his arms around her, he’d damn near kissed her, right here in front of his family and half the town of Chances Inlet. Not that any red-blooded dude staring down those luscious lips of hers wouldn’t do the same.
But this was Jane “Uptight” Upton Whatever-her-new-name-was.
His sister’s best friend.
His older sister’s best friend.
A married woman.
And where the hell was that husband of hers anyway? The dude should be here having a go at Ryan for the way he’d put his hands all over the guy’s wife. Ryan wanted to bust his own ass for being so touchy-feely with Jane, of all people.
It was just the excitement of the game.
And the fact that he’d been celibate since freaking spring training. Not that the opportunities hadn’t existed. He just hadn’t been interested, despite what was falsely reported about him. Frankly, he’d been beginning to wonder if something was wrong with him.
Until he’d had Jane in his arms.
Nothing to wonder about now. In fact, everything seemed to be in working order and ready for a test drive. Had he held her in his arms any longer, he might have embarrassed himself, his parts were working so well.
But there would no test driving—or anything else—with the woman bearing down on him, however, even if she weren’t married. Or his older sister’s best friend. Or his former tutor. Nope. Jane’s gray eyes were dark as storm clouds. And she was babbling something about a dog.
“Promised who, what?” he asked, resisting the urge to lower his hands so he could protect the family jewels.
“My son, you idiot,” she ground out through clenched teeth. “You promised him Santa would bring him a puppy for Christmas.”
The chorus of gasps and groans around him barely registered. Ryan sucked in a stunned breath. It couldn’t be. But that would mean she wasn’t married. She was a widow. With a young son. One who wanted her to have a—boyfriend for Christmas.
Oh, hell, nah. 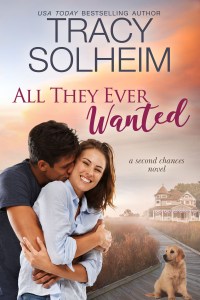 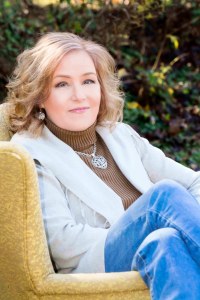 USA Today bestselling author Tracy Solheim writes books with shirtless men on the cover. Some of them are actually best-sellers. The books, not the men. When she’s not writing, she’s practicing her curling. . . bottles of wine, that is. She’s been known to cook dinner but no more than two nights in a row. Most days, she’d rather be reading, which to her is just necessary research. She lives in the suburbs of Atlanta with her husband and a neurotic Labrador retriever. Her two adult children visit but not often enough. (See the note above about cooking.) Check out her romantic suspense series featuring the Men of the Secret Service–shirtless, of course! See what she’s up to at www.tracysolheim.com