You can’t appreciate all the implications of the word “conflicted” until you come face to face with the guy you’ve been secretly lusting after for weeks… and then learn he’ll be signing your paychecks—Angelina Rappaport
Some people might call me sheltered. That doesn’t begin to cover it. I’ve been practically sequestered my whole life. Constantly warned by my eccentric and reclusive mother against the “dangers of the world,” I was only allowed outside my home to attend a strict girls’ school. No parties. No sleepovers. NO boys.
Ever.
Even now in my early twenties, the extent of my social life is spending time with the adorable three and four-year-olds at the preschool where I work. I’ve hardly ever spoken to a man, except for exchanging morning greetings with the fathers of my students.
And soon, I’ll obey my mother’s wishes and enter religious service, training to be a nun.
But gazing out my bedroom window in the turret of my family’s crumbling seaside mansion, I secretly dream of a different life, one that involves freedom, adventure, love, and children of my own.
I at least want a kiss before I give up and follows my mother’s plan for my life.
Sullivan Reece
As a heavyweight boxing champion in prime condition, I can easily go twelve rounds with the toughest fighters on the planet—but when it comes to my two little girls… I’m a lightweight.
Now that my ex has declared herself “done” with mothering, and my spirited and mischievous daughters are living with me full-time, I’m realizing just how much I don’t know about raising kids. My own upbringing in a tough neighborhood left a lot to be desired—I basically raised myself, and honestly, didn’t do all that great a job of it.
And then there’s my demanding training schedule and the travel required for my career. What I really need is a live-in nanny. Yesterday.
But as newcomer to Eastport Bay, I have no idea where or how to find the right caretaker for the two most important people in my life. So when my neighbors say they know the perfect person, I jump at the chance to hire her. She has experience with children, she needs a place to live, and she’s exactly the kind of classy role model I want for my daughters.
There’s just one problem… the new nanny is everything I’m not—sweet, innocent, good. It goes without saying she’s completely off-limits.
Oh, and she’s a total knockout.
The Baby-whisperer and the Brute is a full-length small town rom com fairytale retelling of Rapunzel. It’s a standalone single dad/forbidden love/forced proximity/slow burn romance with no cheating or cliffhangers but plenty of humor and heat and a gentle bruiser with a heart of gold.
ADD TO GOODREADS 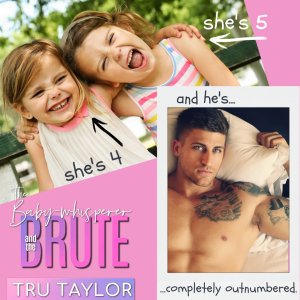 EXCERPT
Angelina
I knew he was only trying to be nice, buying me all this stuff. I’d witnessed many examples of his extreme generosity in the past two months. It was part of his nature. He was an unrepentant spoiler.
But I couldn’t keep the dress. I couldn’t keep any of it.
It was too personal, too intimate to allow him to buy clothing for me.
The lines were already too blurry with my attraction to him growing stronger every day.
Besides, I was still furious at him for the things he’d said. A “frumpy old lady?” I had half a mind to open the second-floor window and dump the whole collection of haute couture out on the front drive.
And the thing he’d said about my hair?
The fury intensified, blended with a heaping measure of hurt. The more I thought about the sneering tone of his voice and the challenging look on his stubborn face, the more my blood boiled.
Instead of stuffing more garments into the bag, I dropped it and picked up one of them to examine more closely. The orange bikini.
It was tiny. Really tiny.
I’d told Sully I wouldn’t wear it if my life depended on it, and I’d meant it.
But now it felt like something else depended on it. My pride. My self-respect. I wanted to show Mr. Sullivan Reece that he couldn’t bully me, that I wasn’t cowed by him. I wanted to show him how wrong he was.
I wanted to shut that beautiful, infuriating mouth of his.
I’d show him what a “frumpy, old lady” I was. I’d make him sorry he’d ever dared to say such things to me. I was going to make his head spin around.
Hurriedly stripping off the shapeless blouse and shorts ensemble, I yanked the tag off the swimsuit—before I could change my mind—and put it on.
Then I turned to look at the full-length mirror on the closet door.
Oh my.
The woman in the reflection looked like someone else. I wasn’t sure who exactly, but not me. This woman looked bold. She looked fun. She looked young and vibrant, not to mention sexy in the way a man like Sullivan Reece might appreciate.
But that wasn’t the point of this exercise, was it?
No. Not at all. I only wanted to make him eat his words and maybe a side of crow to go along with them.
Something was still wrong with this picture though. With sharp, nearly frenzied motions, I yanked the pins and elastic from my hair, freeing it to fall to my bottom and stream over my shoulders.
There. I nodded, stunned at my own actions but filled with a strange new sense of satisfaction.
There’s your “great-grandma Olive,” Mr. Smartypants.
They were in the middle of a game of Marco Polo when I reached the pool. Sully was the finder, yelling out “Marco,” every few seconds while his elated daughters scrambled and splashed to a new location before yelling, “Polo” back at him.
One of his large hands was over his eyes, but I knew he was peeking because there was no way he’d take his eyes off his kids in the water.
Also, he spotted me coming.
How did I know? As soon as I came into view, his hand dropped to his side and he stared.
“Can I play?” I asked in a happy-go-lucky tone.
“Angelina!” Skyla and Claire reacted with screams of delight, not even noticing my attire.
Sully noticed.
His eyes roamed over me, taking in the sight of my long hair hanging loose and all the newly exposed skin. It tingled everywhere his gaze landed. I forced myself not to look away or wrap my towel around myself.
When he spoke, Sully’s voice sounded rough. “You…” He cleared his throat and began again. “You changed your mind.”
“Yes,” I said, purposely missing his meaning. “I decided not to let you three have all the fun when I’m the best Marco Polo player around.”
With that, I ran and leapt into the pool, splashing him. The girls laughed like it was the funniest thing they’d ever seen.
“Look at your face, Daddy,” Claire said. “You’re all red.”
He swiped at it. “Yeah. I guess I’m… sunburned.” 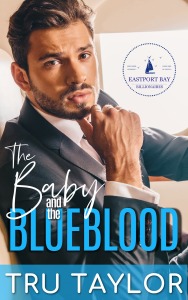 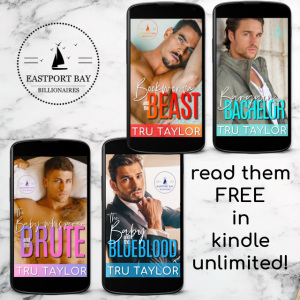 Award-winning romance author Tru Taylor writes romantic comedies to make you swoon, smile, and snort with laughter.
She runs on Coke Zero and dark chocolate, lives for lunches with her girlfriends, and drives to the town beach several times a week to watch the sun set over the water.
She loves LOVE and will attempt to turn any show or movie she’s watching into a romance whether it is one or not. Star Wars? A romance. Lord of the Rings? Clearly a romance. The Expendables? Okay, well not even Tru can redeem that one.
When she’s not writing, Tru enjoys watching movies and reading books with happy endings, spending time with her husband and two kids, and sneaking Hershey’s Kisses from the top shelf of the freezer throughout the day. (Top shelf because… two kids. Enough said.)
Tru is the author of the Eastport Bay small town rom com series and loves living in a small New England town where she’s surrounded every day by the beautiful coastal setting you see brought to life in her books. 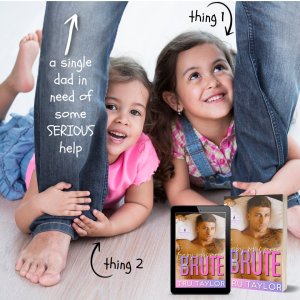