Seducing the Warrior by Laura Shipley

Royce Davis has been living in darkness since an injury in battle left him with failing vision. When a fiery-haired vixen, Lily Moore becomes his employee, she brings with her an unexpected light and a yearning he can’t resist. But, when her past catches up to her, Lily and Royce find themselves caught up in a deadly game. Fans of steamy historical romances will want to sink their teeth into Seducing the Warrior by Laura Shipley, the first book in her To Love A Wicked Warrior Series. 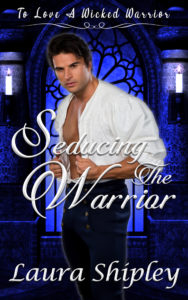 A soldier losing his vision. A lady fleeing for her life. An unlikely couple… bound together in desire, need, and love. The man in the shadows… Injured in battle and his sight failing, Royce Davis has been dwelling in darkness since his return to England, in more ways than one. Consumed by bitterness and pain, Royce is determined to make his way in the world alone. But when a fiery- haired vixen takes up his offer of employment, his heart is awakened by a woman whose beauty enthralls him and whose touch ignites a yearning he cannot resist. The woman who brings the light… On the run from a ruthless enemy, Lily Moore finds refuge in Royce Davis’s home. Refusing to be put off by her employer’s coarse manners, Lily senses the real man behind the facade…as well as a desperate passion she finds herself longing to answer. The darkness that cannot be escaped… Royce refuses to believe he could ever be worthy of a woman like Lily. But when the past catches up with his new assistant, he will move heaven and earth to keep her safe. Royce must prepare to do battle with a cunning adversary while fighting against his own blindness. Lily never meant for Royce to be caught up in this deadly game. But now what began as a business arrangement has become something much more. Can a bargain born of necessity lead them to a fated love? Or will a madman see them parted forever? 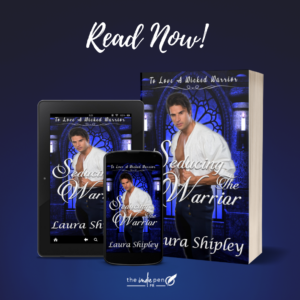 Lily didn’t answer right away, but he heard her footsteps move closer until he knew she was right next to him. He put his hand out and brushed her shoulder. Lily let out a tiny cry before she fell into his embrace. Royce put his arms protectively around her. They clung to each other. “I have been alone for so long, dealing with this. Sometimes I feel like I am in an abyss of my own making. Fear has been the driving force in my life for so long—fear of the unknown, so I’ve been trying to accomplish all I can before it’s too late. ”She caressed his face. “You don’t have to be alone.” Lily’s voice trembled. “You have people who care about you, like Mr. Templeton, Percy,” she paused for a second, “and me. I understand that at times things may seem hopeless, but that is when you need to lean on others the most, and I know that may be difficult.” He leaned into her soft touch. How had this extraordinary woman come into his life, just when he needed her the most? Since coming home from the war, Royce had felt adrift. Lily’s presence anchored him, gave him a beacon to hold on to, and by God, he would hold her close tonight if she let him. “What did I do to deserve to have you in my life, sweet Lily?” He placed his hand over hers and kissed it. “I might ask myself the same thing. Before coming here, the last few months, I had been alone and scared. Fearful of everyone and everything. Ever since I have been here, I have found friends and the happiness that has eluded me for quite some time. I feel like I belong.” Royce tightened his grip on Lily and pulled her closer. “You will always have a place here, for as long as you wish. I ask for no promises and I give none.” On that, at least, he had to be honest. “I understand.” “I may not give you a promise, but I can give you a choice. Stay with me tonight. I will do whatever you ask—I am yours for the commanding. All I ask is that you share this room with me. I cannot bear another night without you.”

Laura Shipley is an indie author who writes Victorian historical romance with dark, brooding heroes and strong-willed, feisty heroines. Her love of romance began the first time she “borrowed” one of the mother’s books and was hooked. While she reads all genres, paranormal romance is a close second to historical. When she is not writing, Laura enjoys spending time with her husband and children. She has never met a piece of chocolate or a glass of wine that she did not like. Her third addiction is Starbucks, and the never ending need for caffeine to keep the creative juices flowing. She prefers movies over tv, too much of a time commitment, but likes spending time outdoors including hiking and rafting. Her greatest joy is transporting readers to another time and place with her books, and to have her readers fall in love with the characters just as much as she does. Laura’s email is always open to comments or questions at thelaurashipley@gmail.com. Don’t forget to follow her on Facebook at TheLauraShipley for updates and other fun stuff.