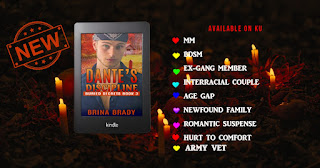 Gang member Dante Medina committed an unforgivable offence against his family, friends, and gang. It was only a matter of time until his homeboys would jump him out of the gang or worse. His life in East Los Angeles as he knew it would end at the age of twenty-four. His father sent his two older brothers to take him to his aunt’s house in Santa Monica. Dante thought his family was working together to save him from the gang, but that wasn’t what happened.

Ex-army officer, protector and Dom, James chose to protect Dante. He is warned to never break the security rules and to accept James’s decisions at all times, or his punishment will be harsh. Dante happily accepted the rules and consequences of the Gay Protection Society conditions.

Unfortunately, no amount of protection can alter the gang’s determination to take Dante down for good.