Even though she knew I’d always catch her, she still had a bad habit of running. As fun as our little game was, I was getting tired of the chase. Especially when one night of combustible passion proved we found the reward we both deserved.

Once I finally had her right where I wanted, her world was tragically torn apart, and she needed me now more than ever. Honored to be the man to pick up the pieces, I didn’t realize putting her back together would come with a price. Because once she was whole again, she wasn’t the same woman I had fallen in love with. 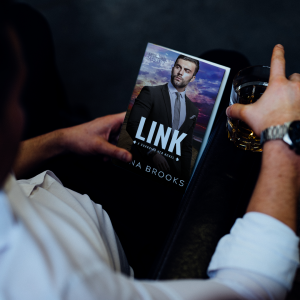 The first time Anna tried to read a romance novel, her hair caught on fire when she leaned over a candle to sneak a peek at her mom’s Harlequin. She thinks being hit on the head with a shirtless Fabio until the smoke cleared is what sparked the flame for her love of romance.

Anna was born in Wisconsin, but currently lives in Texas with her husband and two boys.

She writes sexy romance that always has a happy ending and loves bringing characters back for cameos. Less than six degrees of separation connects any of her novels.

When she’s not writing or reading, she’s watching reruns of her favorite romcoms, talking to her dog and cat like they’re human, eating carbs, or practicing hand lettering.

She loves to hear from readers and can be found on social media as @annabrooksauth everywhere.