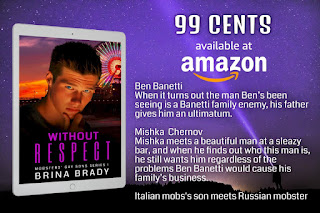 Without Respect (Mobsters’ Gay Sons Series #1) by Brina Brady is 99 cents for a limited time.

For purchase or read with KU US Amazon

An Italian mobster raises three sons, but Sal’s youngest son, Benito Banetti, is gay. His father would never permit Ben to be in an openly gay relationship. But Ben intends to change that when he finds the man he wants. When it turns out the man Ben’s been seeing is a Banetti family enemy, his father gives him an ultimatum. Either he marries his cousin and all is forgotten, or if he chooses to be with Mishka Chernov, a Russian mobster, he will disown him. Mishka Chernov took over his family’s business out of love and respect for his father; however, he has come to realize he isn’t suitable for this top position in the family. Mishka meets a beautiful man at a sleazy bar, and when he finds out who this man is, he still wants him regardless of the problems Ben Banetti would cause his family’s business. Mishka wants the same freedom and separation from family business that Ben has. Without Respect is about two men raised by mob bosses, realizing their families are enemies, but neither is willing to walk away. This story is book one of a MM romance that follows their relationship. It has some D/s and light BDSM elements.

Book 2 and 3 are available at regular price.

Available on audio and paperback at regular price.