Book 2 of The Kingmaker’s Sons

After being sentenced to a life sealed away in the dark recesses of the family mansion at a young age, one brother pays for his death, another for his survival. Twin brothers clinging to one other to overcome their own dark past become the salvation of his body, mind, and heart.

Hendrik Iversen has been alone and outcast from his own family, longing for the end to come. But when his twin captors turn into his caretakers, Hendrik wants nothing more than to begin the future the three have envisioned and planned together. Those hopes and dreams are endangered by an evil, vindictive woman, whose devious plots and intrigues threaten to rip the three young men apart and throw their lives into utter disarray.

More secrets are revealed, adding to the confusion Hendrik must face. Will the love of his caretakers be enough for him to face the dark past and built a bright future? 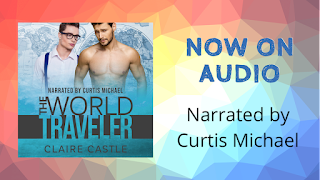 Charming Taylor Samuels doesn’t expect his sister’s video audition for the reality television show The World Traveler to result in anything. But when they’re chosen to compete, he can do nothing but hope for the best.Adam Scott’s best friend wants them to try to get on The World Traveler, and so Adam reluctantly agrees, to make him happy. As the reality sets in that they will be competing, Adam tries not to panic too much. Little do they know that a twist in the show will see Taylor and Adam’s worlds collide in a way they never imagined. Will everything go horribly wrong or could this be the perfect beginning to a wonderful journey?

Caden and Rio met when they were both seventeen and neither were in a good situation at home. Caden had been thrown from his home by cruel parents, and Rio had been left to raise his younger siblings after his parents were deported. But after they meet their lives change, and they become the family each of them needs.

Follow their journey from teenagers trying to figure out how to run a household to husbands expecting their first child. Through it all their love for each other and their family shines through, as they prove they really are Better Together. #friendstolovers #gayromance #truelove #babymakesthree #hurtcomfort #newadult

Book One: Better Together

Party-boy mage Kelly O’Malley has a bounty on his head. Graham, the bounty hunter after him, is a hard rider that likes his women, booze, and his Harley. Picking up O’Malley changes him in ways he could never anticipate, changes his heart and changes the world…

“Think about the drive, not about that green-eyed, hot-bodied, trickster.” -Graham

It’s out NOW on #KindleUnlimited