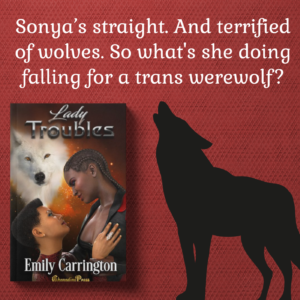 Emily Carrington is a multipublished author of male/male and transgender erotica. Seeking a world made of equality, she created SearchLight to live out her dreams. But even SearchLight has its problems, and Emily is looking forward to working all of these out with a host of characters from dragons and genies to psychic vampires. Fantasy creatures not your thing? Emily has also created a contemporary romance world, called Sticks and Stones, where she explores being “different” in a small town.