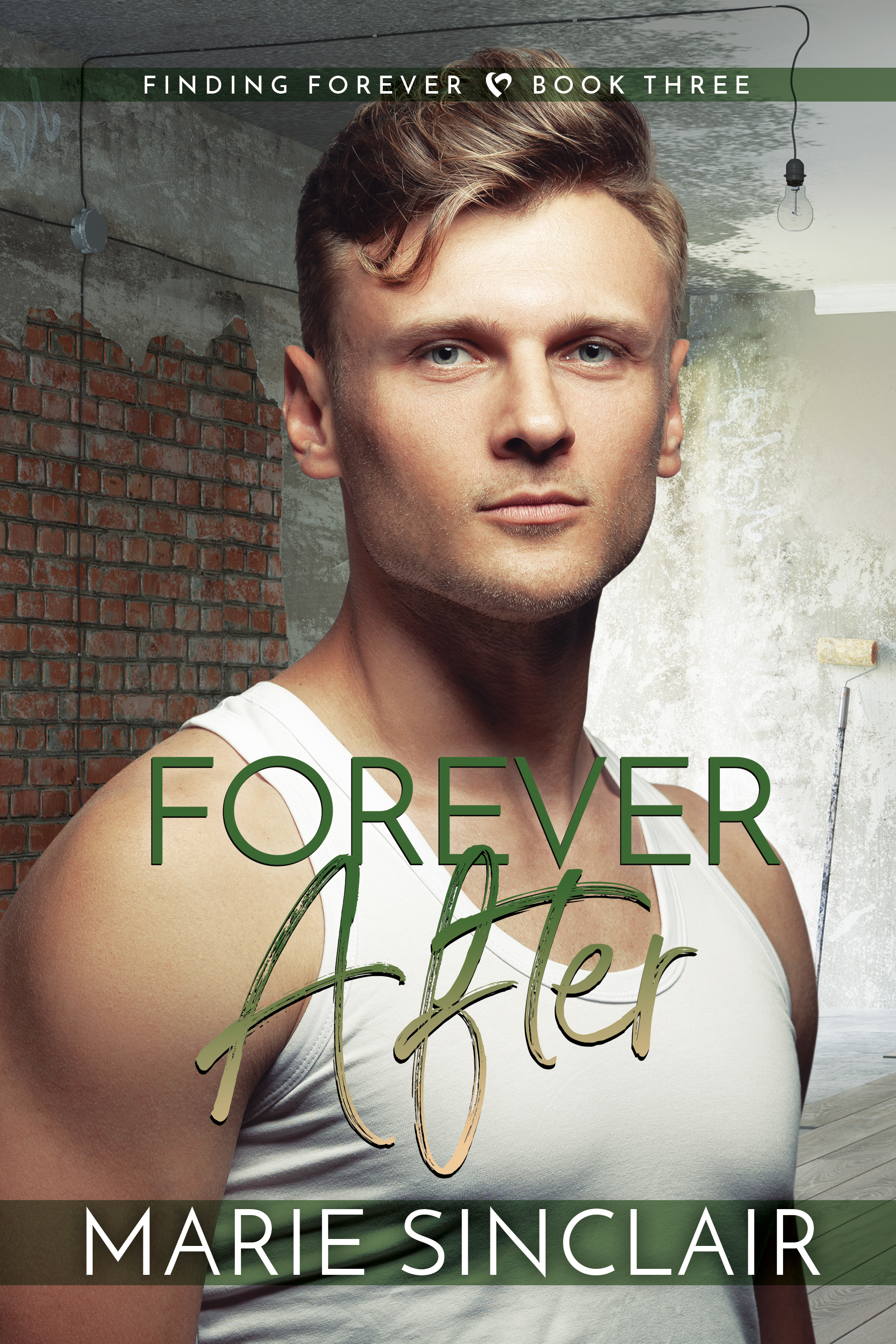 After a fire destroys his apartment, Diego has no choice but to move in with the person least likely to welcome him with open arms: Alex, the recently divorced, presumably straight guy who didn’t take kindly to Diego hitting on him at a friend’s wedding.

Unfortunately, Alex can’t exactly complain about the living arrangements. After his wife cheated, he moved across the country to San Francisco to start over. The place he’s living belongs to a friend, so when Jake also offers Diego a room, Alex needs to figure out how to deal with the exceptionally hot, sex-positive, queer youth counselor whose gaydar has picked up that Alex isn’t as straight as everyone thinks he is.

Forced to live in the same house, Alex and Diego are about as combustible as fire and gasoline. But when Alex’s thirteen-year-old comes out as trans masc and moves into the house with them, Alex begins to see another side of Diego, and Diego realizes this sullen, complicated man has a heart of gold that’s been stomped on a few too many times.

Once the walls start to come down, Alex and Diego realize they have a lot in common. Not to mention an attraction that blazes hotter the more they get to know each other.

Forever After is an enemies-to-lovers, forced proximity, bi-awakening story. It is Book Three in the Finding Forever series but can be read as a stand-alone novel.

Please use the Look Inside feature to read the book’s trigger warning. 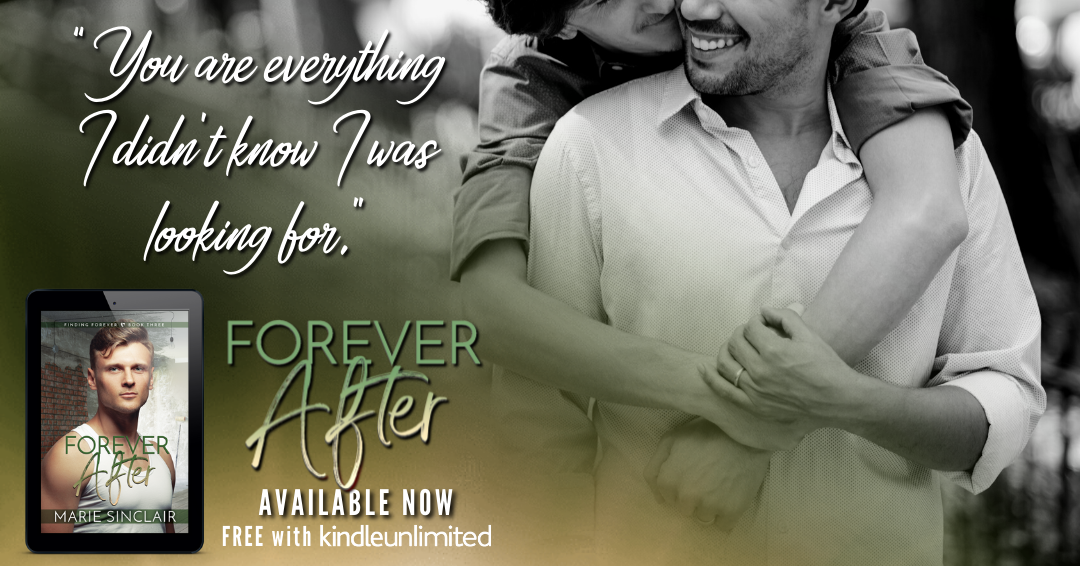 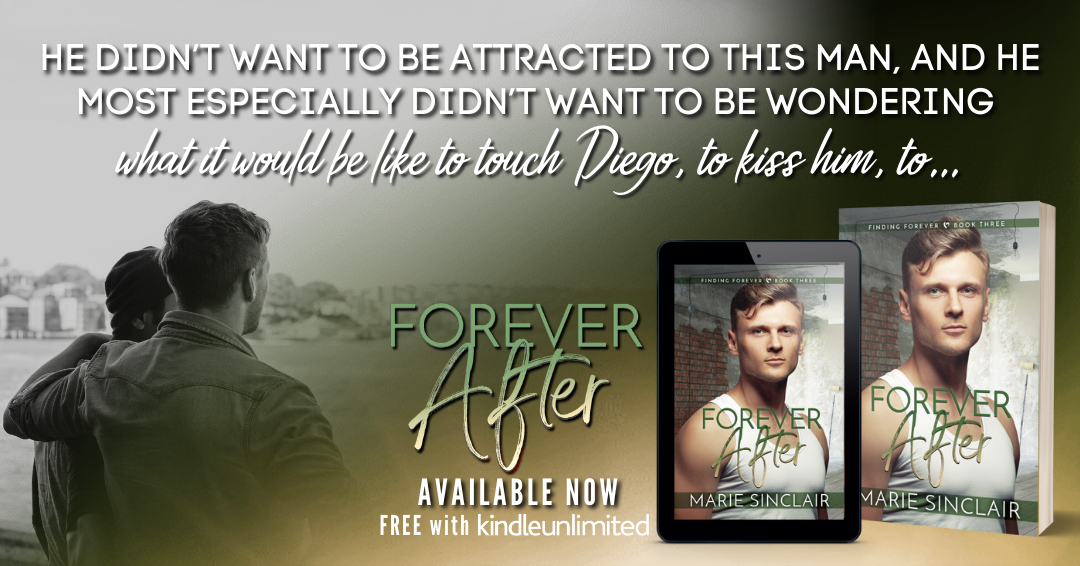 “What the fuck are you doing?” Diego spun, knife clenched in one hand, the tube of biscuits in the other, to find Alex glaring at him from the kitchen doorway. “What does it look like? I’m cooking.” Alex strode into the room and took the knife from his hand, then almost lovingly slid it into the knife block before turning to face Diego. “One, don’t use my knives if you can’t handle them properly. Two, don’t ever, ever use the point of a knife to open something. And three, what the fuck are those things?” He pointed to the tube Diego still clutched in his hand. “I told you, I’m cooking.” “You are not cooking because that is not food.” Diego shook his head in exasperation. “Dude. What is wrong with you?” He turned and rustled a butter knife out of the silverware drawer. “I assume you’re okay with me using this?” “I’m not okay with what you’re planning on eating. That stuff is horrible.” Alex held out his hand, and Diego just stared at it, then raised his eyes to meet Alex’s gaze. “You can’t be serious.” “Yeah. I am. Do you even know what’s in this shit? Give it to me.” With another head shake, Diego turned his back to Alex and resumed his attempts to open the tube. “I don’t know what your problem is, dude, but leave me out of it. I’ll clean up the kitchen after…what the hell?” Diego clamped his hand around the tube just as Alex tried to grab it off the counter. He spun around, glaring at Alex, who was holding on to one side of the tube. Mierda! Was this guy for real? “Look,” Alex said. He extended a finger without letting go and pointed to the ingredients list, which Diego knew was full of preservatives and artificial flavors, but, at the moment, he couldn’t care less. Alex was being an ass. Again. And Diego’s temper was up. He’d die on this biscuit hill, if he had to. “So what?” “When I make biscuits it’s flour, salt, baking powder, butter, and milk. That’s it.” “These take fifteen minutes to make.” Diego tugged on the tube without success. “And I’m hungry.” “I can make them from scratch in under twenty.” Diego tugged on the tube again, but Alex wasn’t letting go. With a growl, Diego tightened his grip, and gave a yank. For a moment, he had Alex off balance, but then Alex found his feet and pulled back. They held for a moment, the tension they both exerted and their full weight equal as they glared at each other over the metallic blue tube. Alex’s eyes glinted, and the corners of his mouth turned up. Diego was struck by how gorgeous the man was, especially as anger colored his cheeks. When Alex narrowed his eyes and then licked his lips, Diego nearly groaned with frustration that all this physical perfection was wasted on such an arrogant cabrón. “Give me the tube,” Alex said. “No. If you want to make biscuits, go ahead. I won’t stop you.” With a huff of air, Alex’s expression turned stony and he shifted on his feet, but Diego was ready. You didn’t grow up the youngest of five siblings and not know how to anticipate when someone was going to try and sweep your feet out from beneath you, which is exactly what Alex did. Diego sidestepped, pulling backward with his full weight. For a split second, everything was fine, and then the tube split as the pressurized contents expanded and the cardboard unraveled around the seam.

To celebrate the release of Forever After, Marie is giving away an e-sets of the Finding Forever Series (3 eBooks) PLUS the bonus prequel!

Check out the rest of the Finding Forever Series 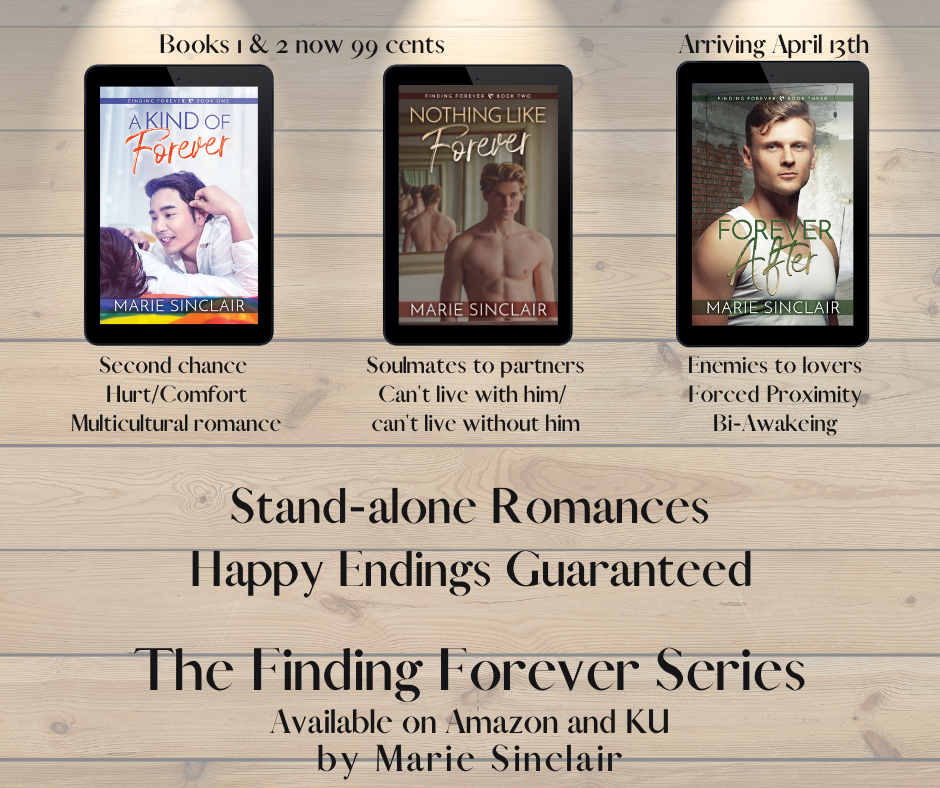 Book 1: A Kind of Forever

Ry and Cart were inseparable in college: two innocent kids in love who thought they could take on the world. But when a photograph of the two of them at an LGBTQ protest outed Ry to his conservative family, his parents forced him to leave college and convinced Cart their relationship was something Ry regretted.

Since they last saw each other, Cart has moved on. Sort of. He relocated to San Francisco, became a human-rights lawyer, and fell in love again and got married, only to lose his husband to cancer. Still reeling from the loss, he’s devoted himself to the struggling LGBTQ youth center his late husband founded. Then Ry joins the law firm where Cart works. The moment they see each other, Cart can tell Ry’s changed. Gone is the sensuous and enthusiastic lover Cart remembers, and in his place is a man who looks at Cart with disgust. The last thing Cart needs is having to figure out what’s going on with his former lover, but he can’t ignore the strong emotions resurfacing between them.

When Ry returned to his hometown of San Francisco, he knew being near his parents again was going to be a challenge. For twelve years, they’ve been manipulating him with threats of being disinherited and losing his trust fund. It worked when he was younger, getting him to leave college and agree to conversion therapy in the hopes of getting away and returning to Cart. But the camp caused him so much trauma, he can’t even look at another man without experiencing a panic attack. Now his goal is to beat his parents at their own game by pretending to be the dutiful, straight son they want. Two more years, and he’ll succeed. Then he sees Cart again and realizes what really matters to him. He just needs to find a way for Cart to realize it too.

Trigger Warnings: This book contains references to attempted suicide, conversion therapy, depression, and self-harm, as well as depictions of PTSD and panic attacks.

Jake and Micah met at eighteen and formed a deep connection the instant they saw each other. That was the easy part.

Nothing Like Forever is a soul mates-to-partners, can’t-live-with-him/can’t-live-without-him unconventional love story in which Jake doesn’t want romance or a happily-ever-after, and Micah wants it all. With Jake. For twenty years they’ve been in and out of each other’s lives trying to get it right. They fail, retreat, disappear from each other’s lives for years at a time, and then fate (or a friend’s wedding) brings them back together for another attempt at making it work. Their connection always runs deep, but no matter what it takes for them to stay together, one thing’s certain: these guys have a unique path to finding their HEA, and when they get there, it might not look the way either of them expect. This novel is about learning what you can and can’t expect from your partner and what you can and can’t accept for yourself in a relationship, what lines you’re willing to cross, what compromises you’re willing to make, and where you have to stay true to who you are no matter how you feel about the other person. It features an aromantic MC and a guaranteed HEA that’s as unique as these two men and the journey it takes them to find forever. Trigger warning: this novel has mentions of alcoholism and dementia. It also features MCs who are consensually non-monogamous, but there are no on-page depictions of Jake and Micah with anyone except each other.

Marie Sinclair is a queer writer living in San Francisco. Though she’s been a writer all her life, it wasn’t until she stumbled upon MM romance that she knew she’d found a home for herself and all the characters in her head.

Her focus is on contemporary romance, usually on the steamy side. While HEAs are guaranteed, it will always take some work for the couples to get there, and it might not look the way they expected at the beginning. As a member of the LGBTQ+ community, Marie believes in rooting her stories in the real world of queer culture and showing how love can survive even in challenging times.