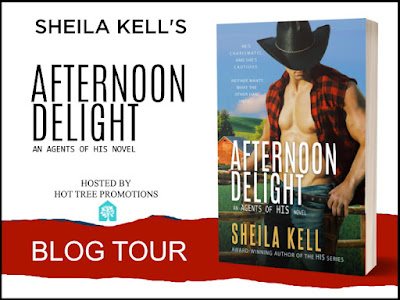 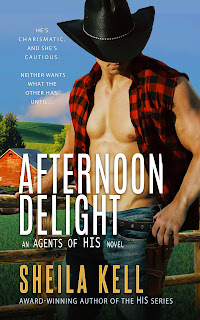 What happens when a man who solves problems by blowing them up finds himself in a situation where diplomacy is the best plan of attack?
Mike “Cowboy” Vaughn enjoys blowing things up. As an explosives expert with HIS, he knows nothing of diplomacy. So, when he’s called back to the family ranch to help find out who keeps sabotaging them, he is put in situation after situation where he would rather blow things up than have the necessary conversations.
Elizabeth Ladner has wanted Cowboy from the moment she saw him. But, he is a client, and she is not into flings. That is until he gets under her skin. When she has to choose between Cowboy and her ex-husband, she may make the wrong choice.

MIKE “COWBOY” VAUGHN enjoyed blowing things up more than anything else. His lips twitched with a suppressed smile—scratch that. Working with munitions ranked second best because nothing beat sliding between a woman’s soft thighs.
“I saw that,” Danny Franks, call sign Ballpark, whispered over his radio. “He’s smiling. Boss,” he called to their team leader, Ken Patrick, “he’s having way too much fun. Let’s hope there aren’t any bombs to diffuse. He might cream his pants right in front of us.”
Cowboy bristled. With the explosives he made, he knew the risks. When someone else created an explosive, the stakes were high. Something could go wrong, and when it went wrong with explosives, it really went wrong. “Shut it,” he ground out to Ballpark.
He almost chuckled at that call sign. Danny used to just be called Franks. Danny had been a DEA agent, so he had no military special ops call sign. When the two men were together, a Ball Park Franks commercial came on, and that was what Danny had brought to grill, so Cowboy began calling him that. It hadn’t taken long for everyone to join in the harassment.
“Son of a—”
“Language, Ballpark,” Boss interrupted, his voice vibrating with intensity. Ever since Boss had adopted a son, he had changed his tune on language. Yet, that also meant it was time to stop the joking they used to release tension. It was time for steel focus, and Cowboy especially needed to use it since he held life or death in his hands.
Ignoring his teammates, he confirmed his charges were perfect on the hinges for a controlled explosion, then backed away from the metal door and voiced, “Fire in the hole.” Without a moment’s hesitation, he blew open a place to breach the concrete building where they were attempting to rescue three hostages.
Six HIS agents joined the op—Boss, Ballpark, Doc, Cowboy, all from Alpha team, and Romeo and Speedy from Bravo team. Their brief intel led them to believe they would encounter three, maybe four, tangos—terrorists—who held three kidnapped women, and HIS had the odds.
Piece of cake.
Or it would have been had they been able to acquire building plans. With time being of the essence, they would fly blind inside the new structure.
Boss tossed a smoke grenade into the building.
Before Cowboy could jinx their op—yes, he believed in some things that made no sense—he put his gas mask on and pulled his M4 Carbine to his shoulder, then followed his team leader into the unknown situation with smoke everywhere. Boss went left with Speedy and Ballpark, and Cowboy went right with Romeo and Doc. The two teams were to sweep the building, take out the tangos, and rescue the three female hostages.
Once they turned down a hallway, a shot hit him squarely in the chest. His breath caught, and the pain surprised him as red seeped on his black shirt. He collapsed on the ground, knowing Doc couldn’t help him until the hostages were safe. He attempted to point his M4 at the threat around his teammates but knew it was hopeless. Is this how my life will end? He would die saving someone if that was what it took. Sure, noble of him, and the chicks dug that type of talk. But he didn’t want to die because he had been stupid. Why hadn’t I paid more attention to my surroundings?
Inside the building, their rescue resembled a Charlie Foxtrot—clusterfuck. As for his team, most had a smattering of some foreign language, primarily Spanish. Yet, he could understand the foreign words that were probably Eastern European without knowing for sure.
“Drop your weapons or she dies.” Every tango holding a gun to the head of a hostage said that.
Fuck. Fuck. Fuck. Romeo only took a second to step forward as team leader for their split element. He also yelled for the tangos to “Put down your weapons.” Of course, it did no good. They were at a stalemate.
By God, if I’m going to die, my men had best save the hostages, was all he could think while lying there. His death had to be worth something. It had to matter in the end. 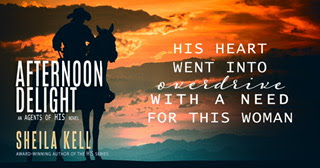 Website | Facebook | Goodreads | Amazon | Bookbub | Newsletter
Sheila Kell writes about the romantic men who leave women’s hearts pounding with a happily ever after built on memorable, adrenaline-pumping stories. Or, (since her editor tries to cut down on her long-windedness) simply “Smokin’ Hot Romance & Intrigue.” Her debut novel, His Desire (HIS Series #1), launched as an Amazon #1 romantic suspense bestseller and Top 100 overall, later winning the Readers’ Favorite award for best romantic suspense novel.
As a Southern girl who has left behind her days with the United States Air Force and as a University Vice President, she can usually be found nestled in the Mississippi woods, where she lives with her cats and all the strays that magically find her front door. When she isn’t writing, you can find Sheila with her nose in a good book, dealing with the woodland critters who enjoy her back porch, or wishing she had a genie to do her bidding.