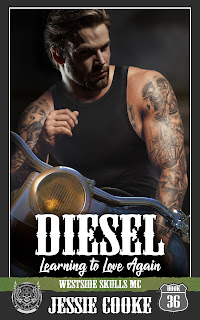 He’s given up on love…
…she hasn’t.
Diesel is good at what he does. It’s how he got his name. What he’s not good at, is letting go of the pain from the past.
Laura can’t get away from her past, no matter where she runs. To her all men lie, but she won’t stop believing that there is someone out there who can prove her wrong.
Can two lost souls find what they need from one another? 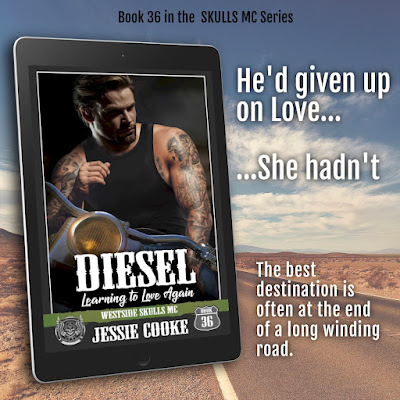 Laura sat on the line waiting for her next victim. An orange Camaro rolled up beside her. She could hear the whirr from the belt of the supercharger that was poking through the hood. “You’ll need more than that to beat me.”

Mary Wright, her best friend, was sitting beside her. She laughed.

“Oh my god. Look at the hunk driving that,” Mary said.

“Shush. I can’t look now, I need to concentrate,” Laura said. She was a ball of tension, eyes focused on the flag bearer…right foot hovering over the loud pedal.

“You have to look,” Mary said. “I think you’re racing God this time.”

Just as she said that all hell broke loose. Laura put her foot down too hard…too fast…and the back tires lit up as her black Mustang started to snake down the road. As she fought with the wheel to stop sliding into the car beside her, smoke poured off the back tires and she had to backpedal to regain traction. The race was over. The Camaro was two car lengths ahead and the finish line was looming too soon.

“You’ll get him next time, Detroit,” Mary said. Laura’s friends called her Detroit.

Laura looked across at her friend and gave her a filthy look. “I wasn’t fucking concentrating.”

“Not my fault,” Mary said. “Besides, you really should’ve had a look. I would’ve thrown a race for him.”

“I throw a race for no one,” Laura said. “I don’t care how hot he looks. He’s probably an asshole. In fact, he is an asshole driving an orange Camaro. Did you see that thing? If I hadn’t lit up, I would’ve wasted him easily.”

As she slowed down, having passed the finish line, she said, “What the fuck is he up to?” The Camaro was still speeding off into the distance.

She looked in her rearview mirror and through the cloud of smoke that she left behind, she could see the lights flashing. Should I do a run?

As if she could read Laura’s mind, Mary said, “Don’t try to get away again.”

“Who…me?” Laura laughed and slowed the car to a stop.

Laura lowered her window and while they waited, she asked Mary, “So what did he look like?”

“I might just have to stalk him then,” Laura said.

“He’s got a girlfriend,” Mary said.

“Yeah, and she was giving me the hairy eyeball.”

“Could’a been his sister.” They both started laughing.

Just then the officer appeared at her open window. “Laura, Laura, Laura. I don’t think you should be laughing right now.”

That put a smile on his face. “License and registration please, miss.”

“It hasn’t changed since two nights ago,” she said.

He was fighting back a laugh. “I’m afraid I have to see it. Step out of the car please, miss.”

As she opened the door and got out of the car, officer Ben Hall’s eyes were glued to her large breasts, which were hardly contained in the tight black top she was wearing. She turned around to close the door and his eyes went straight to her tight rounded butt, which was barely covered by her cut-off shorts. She gave Mary a sly wink and smiled, and Mary rolled her eyes.

She kept leaning into the car giving him a view she knew would work in her favor. “Can you pass me my papers please, Mary?” she said.

Mary reached into the glovebox and as she handed the papers to Laura she said, “For your boyfriend.”

Laura flipped Mary the bird before turning back to officer Ben with a sexy smile pasted on her face. That smile only got wider as she looked down to see the obvious bulge in his pants.

Ben took the papers from her and glanced at them before saying, “I’m afraid I’m going to have to book you this time, Laura.”

She didn’t know what she was thinking but she rose on her toes, put her hands on either side of his face, and gave him a kiss he would never forget.

“Officer Ben, are you allowed to kiss girls like that while you’re on duty?”

“Did you plan that?” he asked her.

“Not at all. I didn’t know what I was thinking,” she said.

“I’m not going to ticket you tonight, Laura, but you can’t keep racing around the streets like this hoping that I’m going to be the one pulling you up. Besides, I would hate for you to hurt yourself.”

“You don’t need to worry, Ben, I know how to handle myself,” she said.

“I’m sure you do,” he said. “How about I take you out for drinks sometime, Laura?”

“You know, Ben, I might just take you up on that one day.”

“I’ll look forward to that. You take care, Laura.”

He smiled as he turned to walk back to his patrol car.

As Laura sat back in her car, Mary asked, “Do you think you ever will?”

“But what? Did you see that bulge in his pants? He’s packing some big artillery in there,” Mary said. “I wouldn’t mind getting my hands on it.”

“The fuck you didn’t! You’d have to be blind to miss it and it only got bigger after you kissed. He’s still sitting in the patrol car. He’s probably giving it a toss now.”

They were laughing so loud they could hardly talk, but Laura squeaked out, “Should we go take a look?”

Officer Ben Hall was still sitting in his patrol car when the girls finally drove off into the night.

Steve was disorientated. The car had spun so many times he didn’t know which way he was facing. It had come to a sudden halt up against a pole. As he drifted in and out of consciousness, he could taste blood in his mouth and reached up to wipe it away. He looked across at Angie in the passenger seat. She was slumped forward, and he could see there was blood on the side of her head. He reached for her, and pain shot through his shoulder like a knife.

He said her name. “Angie. Speak to me…are you alright?” She didn’t move and he feared the worst. Managing to unbuckle his belt he moved over to her and sat her up in the seat. He was having trouble keeping her upright as her head rolled forward once again. And then panic set in.

He kept calling her name as he tried to get out his door so he could rush around to help her. It wouldn’t open. He leaned back and kicked. He finally freed himself from the car. Racing around to her side he nearly lost consciousness again. He felt dizzy…nauseous. He was going to throw up, but he couldn’t. He needed to help his fiancée. But the car was up against the pole. There was no way in. He raced back to his side of the car, and everything went black.

He didn’t know how long he was out for, but when he came to, there were lights flashing in his eyes. It took a few seconds to remember what happened and he tried to jump up again. As he began to fall over somebody grabbed a hold of him.

“Steve. Sit here for a minute.” Ben sat Steve back on the pavement. “You’ve been in an accident.”

“Angie. Is she alright?” Steve asked.

“I’m sorry” was all Ben could say.

Steve felt like the lights of his life had just been turned out forever. When the ambulance came, Ben helped Steve to his feet and walked him over. “Sit here, buddy, I’ll be back soon.”

As Steve sat on the bottom step of the ambulance, he could see them wheeling the gurney over to the car. He would only find out later that a group of guys he’d been racing with had muscled the car away from the pole and opened the door.

As the ambulance drove away, Ben followed on in the patrol car thinking about the night. For one short period of time, he hadn’t felt happier. The kiss from Laura was like something from heaven. Something he’d dreamed about from his early teens when they used to play together… friends of the family.

And then his thoughts went to Steve. He had only known Steve for a while. The first time was when he ticketed him for speeding on the same road as tonight. Steve had been staying in Detroit for the summer, having driven from California and deciding to stay on months later after meeting Angie. Infatuated with one another, he’d said yes as soon as she mentioned marriage. All she wanted to do was to get the hell out of Detroit and away from a troubled life.

As Ben drove in silence, a shiver ran up his spine.

Fuck, that could have been Laura.