“Kindle Alexander takes a caterpillar and molds him into a butterfly and both Chad and Ducky will become instant favorites.” ~The Overflowing Bookcase 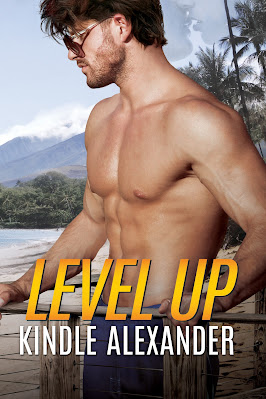 Duncan “Ducky” Reigns, metalhead and hardcore gamer, has spent his life railing against the establishment. But now when he looks at himself in the mirror that’s not the person he sees. Though he and his brother have worked hard to create a successful multi-million-dollar company, he’s lost himself and his identity in the process.
Chad Reeves, successful in his own right, has achieved every goal he’s set for himself. But living up to the legacy of his uber-successful father feels like an impossible task. When the heavy burden of a lifelong secret begins to unravel, he’s forced to face the truth. He’s lacking in what matters the most and only one thing can make it right.
Sometimes a simple reboot is all it takes to realize the answers are right in front of you. A soul-searching trip to paradise changes everything for two best friends… if they are brave enough to follow their hearts and reach for the Level Up.

Compassion hinted in Teri Reeves serious expression. “Then who is he?” she asked as if it were a given next option.

Hell, maybe it was. She had lived with his father for eighteen years, knowing he was gay for most of that time.

Technically, her question should have made this easier on Chad, but it didn’t. With all the mean-spirited harassment he’d received from the kids in his high school when his father came out, and the untold amount of bullshit he’d had to deal with when their private family affairs began to be splattered all over the local news, made talking about a long-term relationship with another man anything but casual…

Wait a damn minute. Long-term relationship? That thought had struck him like a blow from out of nowhere.

Wow, what a moment for an epiphany. He ran unsteady hands nervously through his hair. A long-term commitment from Ducky? Is that what he wanted?

Ducky had never given him any clue that he was anything other than a straight man. Not any of those telltale signs indicating interest in the same sex. The bigger problem was that Ducky hadn’t spoken to him in days. Not one word to all of Chad’s texts apologizing for his unguarded comment.

His heart dipped then fluttered, sending a shiver from his head to his toes and racing back up his spine again. He didn’t like Ducky ignoring him, not one damn bit. Anyone but Ducky.

“Ducky,” he finally whispered. Funny how saying the name out loud seemed to validate his feelings, giving him an inner boost.

His mother blinked then opened her mouth to speak. No words came as she blinked again, closing her mouth. Her head tilted quizzically, and her hand lifted about six inches from her head. She shook her fingers. He took it to indicate Ducky’s mop of curls.

First smile in days. “Yes. Except he’s changed, but I’m really into those curls.”

Chad reached for the cell phone in his back pocket, bringing up an image of Ducky that he’d saved from The Game Awards. He turned the screen to show his mother Ducky’s new look.

She pretty much had the same reaction he had. A moment of pure confusion as she stared at the screen before she took the phone from his hand, using her fingers to zoom in on Ducky’s face. “This is him? He’s very handsome, Chad.” Her brow wrinkled as she glanced up. “You two have similar coloring, but your hair’s darker now.”

Chad nodded and looked down at Ducky’s photo still on the screen. “He and I talk all the time. Mostly online and text, but it’s moved to phone calls now too. We’ve never met face-to-face, but he’s my best friend. I share almost everything with him, yet he didn’t tell me he’d made these changes to his appearance. That’s why I said it wasn’t him during the podcast. It caught me off guard.”

“Because you’re attracted to him?” she asked, looking at the screen again, tapping it to keep the photo up.

“I was attracted to him before he did all this. He’s a really good guy, Mom. Smarter than anyone I know. We’ve been friends since we were on Xbox Live together in early junior high. I think he surpasses Dad with his knowledge of code. Ducky can hack into anything. We’d all be online together and watch him do it when we were younger.” Chad took his phone from his mother, drawing her attention back to him. She needed to hear what he planned to say. “I’ve been dealing with my attraction to guys since way before Dad came out. Ducky was the first guy I was into. I’ve never stopped being into him. He’s funny in this unintentional way, but he laughs at himself. He’s real. The most real person I’ve ever known. I’ve never met anyone else like him.”

“I never had any idea you had these feelings. When I asked the question, I didn’t really expect this response,” his mom said in that way only mothers used when they spoke of the regret of missing something so big. “You were young. You must have been afraid and unsure.”

“Hell no, I wasn’t afraid. Sorry,” Chad said, ignoring the critical arching of her brow at the use of the swear word. “Do you think any child you raised could be afraid of anything?”

He pushed off the counter, tucking his cell phone back into his pocket. “I’ve been with guys, Mom. Lots of ’em. And that’s all I’m going to say so don’t ask me any questions.” He couldn’t contain the shiver running through him at the awkwardness of admitting even that much to his mother about his sex life.

“You’ve been with women, too. Right?” His mom stammered, clearly questioning everything she knew about Chad. “Don’t answer that. It doesn’t matter. How have I never known these things about you before? I tried to be an observant, present mother for your whole life. I love you.” She looked pitiful, causing Chad to give a good laugh as his mother took her seat and lifted her glass of iced tea, taking several long gulps.

“Mom, all of us are very well-adjusted. You and Dad are great parents. Kids don’t tell their parents everything. You know that. And it wasn’t easy on any of us to have Dad’s sexuality splashed out for the world to see. I get that social media doesn’t hold weight, but when your father owns a social platform that’s bought by a technology giant like Wilder and then those two men become a couple…the children involved are gonna get some backlash.”

“Oh, I need something stronger than flavored tea.” 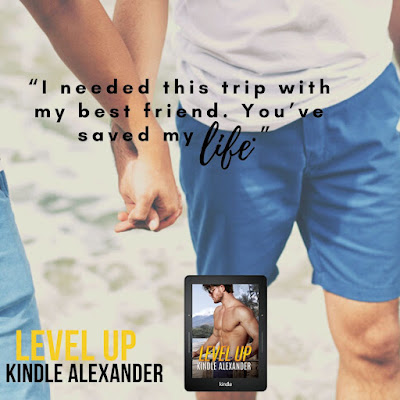 Best Selling Author Kindle Alexander is an innovative writer, and a genre-crosser who writes classic fantasy, romance, suspense, and erotica in both the male/male and male/female genres. It’s always a surprise to see what’s coming next!
I live in the suburbs of Dallas where it’s true, the only thing bigger than an over active imagination, may be women’s hair!
Usually, I try for funny. Humor is a major part of my life – I love to laugh, and it seems to be the thing I do in most situations – regardless of the situation, but jokes are a tricky deal… I don’t want to offend anyone and jokes tend to offend. So instead I’m going to tell you about Kindle
I tragically lost my sixteen year old daughter to a drunk driver. She had just been at home, it was early in the night and I heard the accident happen. I’ll never forget that moment. The sirens were immediate and something inside me just knew. I left my house, drove straight to the accident on nothing more than instinct. I got to be there when my little girl died – weirdly, I consider that a true gift from above. She didn’t have to be alone.
That time in my life was terrible. It’s everything you think it would be times about a billion. I love that kid. I loved being her mother and I loved watching her grow into this incredibly beautiful person, both inside and out. She was such a gift to me. To have it all ripped away so suddenly broke me.
Her name was Kindle. Honest to goodness – it was her name and she died a few weeks before Amazon released their brand new Kindle ereader. She had no idea it was coming out and she would have finally gotten her name on something! Try finding a ruler with the name Kindle on it.. It never happened.
Through the course of that crippling event I was lucky enough to begin to write with a dear friend in the fan fiction world of Facebook. She got me through those dark days with her unwavering support and friendship. There wasn’t a time she wasn’t there for me. Sometimes together and sometimes by myself, we built a world where Kindle lives and stands for peace, love and harmony. It’s its own kind of support group. I know without question I wouldn’t be here today without her.
Find out more by visiting http://www.kindlealexander.com or email me at kindle@kindlealexander.com