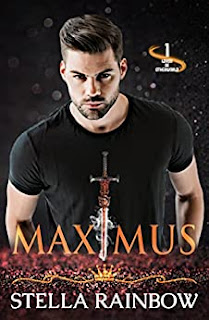 Maximus
The first time I went looking for Kym, it was because he was a relative of a murder victim I was investigating. Every time after that? It was because I realized he was my mate.
For the first time in my long existence, I’d found something more important than my work. But with children getting kidnapped and an evil unlike I’d ever seen growing stronger, my realm and my king needed me more than ever.
Could I really make a choice between my family and my mate?

Kym
I knew my uncle’s death had been a murder, but no one believed me except my best friend. That is, until I met Maximus.
He didn’t scare me, not even when he told me he was my fated mate, or that he was from a different realm. He was intimidating, but also really sweet. I wanted him, but choosing him meant letting go of everything I held dear.
Could I really make a choice between the only home I’d ever known, and the man who promised me the world?

Tags:
Maximus is intimidating but secretly sweet, Kym is intrigued but wary, things need to happen, Fate has plans, raiding the bad guys is FUN, fated mates, Kym doesn’t need more complications, talk about age gap, Max just wants to protect his man, Kym is really pretty, gruff x grumpy??, Max talks with his weapons, sensitive ears are awesome, two workaholics fall in love and save the world. Not really, but they helped!

Maximus, the first book in the Lords of Otherworld series, features a workaholic soul collector, a wary tattoo artist who is intimated by him and yet can’t seem to stay away, and a romance that spans across realms.

Each book in the Lords of Otherworld series features a different couple with an overarching plotline. It is recommended to read the books in order for the most enjoyment.

Next Up is R.E. Hargrave